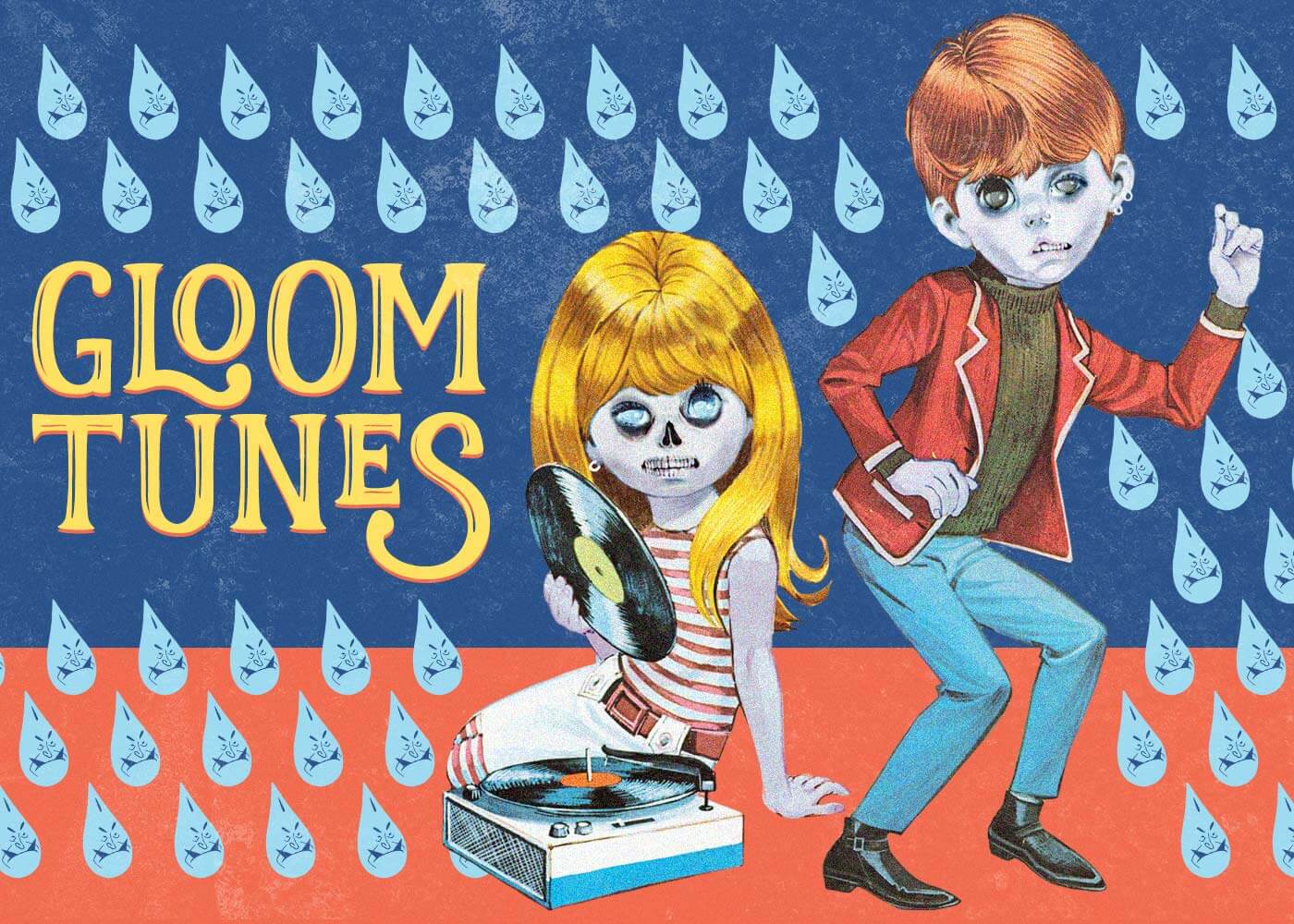 The first time I ever listened to Mean Jeans, I did what I feel like anyone would do. I put on the first song on their first record, and immediately heard the lyric: “I was born on a Saturday Night. My mama told me it would be alright. She was wrong and then she died. I was born on a Saturday Night”. It’s one of those “is he joking” sort of lyrics. Mentioning the death of a parent in this way is jarring in a way I didn’t know how to comprehend at the time. He also says in the song that he was born in a leather jacket, and that’s probably not true. I thought the lyric was funny and sad, so I laughed out of discomfort and absurdity. Is he serious though? I don’t know. Probably. Despite their catalog being nearly entirely about partying, running away from it all, and things from the 1980s, there’s an unwavering emotional depth to their writing. It’s one of the things that make them special; it separates them from the hundreds of other party punk bands.

“I first heard On Mars in the beginning of 2013. Dead Bars was just getting started and I met our drummer, C.J. because he lived up the street from me.” John Maiello plays in Dead Bars, a band that discusses similar themes in their music.

“When [Dead Bars] was first kicking around, we started hangin’ out or driving around and showing each other different bands we’d been listening to over the past couple years. I didn’t even own a stereo. We were listening to music through YouTube on my T.V. and drinking beer. One of these nights, [someone] put on the song “Don’t Stop Partying” and he said that it was from his current favorite album.” That album was Mean Jeans’ sophomore record, On Mars.

The band’s second album, also their second released on Dirtnap Records, was a triumph that carried them all the way to Fat Wreck Chords for their next. On Mars takes the band’s borrowed Ramones sound and turns it up to 420. They managed to craft brilliant pop punk songs, doubling down on the harmonies and hooks that made their first record so memorable.

“I loved [‘Don’t Stop Partying’]. But I realized it’s not really a song about partying at all. It’s a song about being lost, confused, and alone.”

Escapism and punk rock go hand in hand, especially when viewing punk rock through a utopian lens. There’s a certain allowance we can give ourselves to do this while still getting by in life. Mean Jeans speaks to this with On Mars when they discuss living on the planet Mars to get away from people, and the consequences of such behavior in the mid-album ripper “Is Anybody Out There?” Escapism can be necessary though, when life allows for it in one-way or another. A lot of the time, you just need to clear your head and think about anything but what’s in front of you. This applies itself as needed when we have a problem that we don’t know how to face, or at least one we don’t know how to face yet. John can relate:

“I really don’t like flying on airplanes. I get nervous and feel trapped but I deal with it. I’m afraid to take any anxiety medication and I don’t drink on flights either. For the last four years, and even to this day whenever I am flying I listen to On Mars from front to back as the plane starts taking off. It somehow makes me feel better. I close my eyes and I feel like I can escape too.”

Mean Jeans understands this, but more importantly, they discuss the loneliness this escapism can give you. It’s not always bad to feel lonely – I think we all need space sometimes – but feeling lonely in our problems and coping mechanisms is just the nature of dealing with mental health issues. In the song “Is Anybody Out There?”, the verses are about as subtle as the humor in the film Van Wilder, but with lines like: “Trampoline on a jello shot and cannonball into a bag of pot, man. Slip and slide into a black hole. Moonwalk into the unknown.” In all of this, the band begs the question – “Are you way out there? Someone, somebody like me?” There’s a difficulty that these distractions provide, and it can be hard to shake feeling of being alone while you’re “tubing the Milky Way”. It’s a coded language – the band can’t help but pour Jäger on their problems. 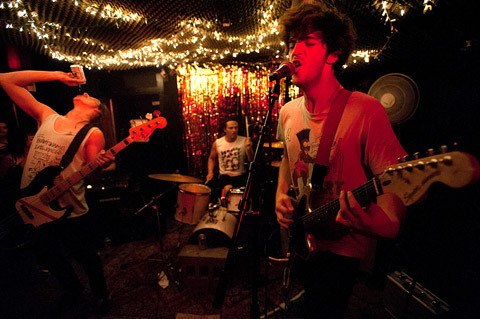 John was very candid when we talked about our mental plague. “I’ve been anxious since I was a kid. I didn’t even realize it until later in life though. I’ve been biting my nails ever since I can remember and had general fears like most kids do, like public speaking or being afraid of heights, etc. It was all pretty manageable though. One weird thing about me is that I haven’t eaten a piece of fruit in like 25 years. I’m serious.” Irrational fears are weird. I can tell you, the reader, from experience, that having and dealing with irrational fears is incredibly lonely and confusing. “When I was younger, I just started being disgusted by the smell or taste of any fruit and to this day I can’t really be around it. Sounds crazy…and it probably is.” Actually, it’s not. And it makes sense that we try to get away from the things we perceive as threats. Escapism is in our DNA.

There’s a human phenomenon referred to as a “conditioned taste aversion”, coined in the 1950s by a Dr. John Garcia, testing sweetened water on irradiated rats. Despite the water having nothing to do with their radiation sickness, the rats associated the sweet water with the accompanying radiation induced nausea. A conditioned taste aversion is described as a phenomenon that occurs when an animal associates the taste of a certain food with symptoms caused by a toxic, spoiled, or poisonous substance.

In other words: if you become repulsed by a piece of fruit you ate in childhood, you may never enjoy that flavor for the rest of your life. These irrational fears can have very real origin points – and this is a solid example of that. It’s the sort of thing an anxious person can’t really explain though; at least to someone who has a passing curiosity in why someone like me doesn’t eat ranch dressing.

“As I got older, I developed more social anxiety. I’m a hypochondriac and I am claustrophobic. I don’t like traveling on buses, trains or planes because I feel trapped. I don’t like how I’m not in control and can’t “get off” if I wanted to. I’ve had to walk out of several work meetings because of similar feelings.”

Just like a taste aversion, there may have been a life consequence to relinquishing control that fuels an inner fear when you’re not in the driver’s seat. In a lot of the people I’ve talked to who suffer from anxiety disorders, myself included, this is a really big symptom. Sometimes I’d really like to “skate to Mars on a frosted flake” but I just cant – and that’s where On Mars comes in. It’s music like this that helps us realize that even in a ridiculous cartoony way, we can plot our vacations away from reality, even if that just means ripping a bong when you get home from work.

To someone hearing it in passing, On Mars probably comes off as a record about having fun. Big songs with big hooks and big choruses – a big “fuck you” to the establishment and a big thumb up to shotgunning a few beers on your patio. It’s not though. It’s way deeper than that. If you know, you know. “It’s not about having fun. It’s about escaping. And then I realized that’s what the whole album is about; an escape. It’s like fuck everything, maybe it would all be better if we weren’t here anymore. Maybe everything would be better if we were on Mars instead. It’s funny – but at the same time tragic.”

This record takes chances. John seems to know about it more than I do. I’ll let him explain.

“I think in one sense, this album is a failure but that’s why its amazing. This album is about taking a chance, doing something different. A lot of the Mean Jeans fans didn’t want the slower songs, and I think that maybe have had some effect on the band and how they approached songwriting after On Mars.”

I asked John how this kind of songwriting inspires his own work in Dead Bars. “The lead guitar on this album is also amazing. In addition to screaming guitar solos, there is a really interesting technique that they used which is to have a lead guitar mimic the lead vocal track and have it mixed in right underneath the vocal. Such a cool sound. I also read in an interview with Mean Jeans one time about not wanting to be another “one dimensional party band” and that’s what was so exciting to me when I first heard this album. It sounded different yet familiar and it was just oozing with hooks. There really is depth to the songs, the production, and the overall concept that other pop punk bands were just not doing at that time. I didn’t realize it at the time, but I also think the concept of On Mars inspired me to think more about creating an album rather than just putting ten songs on a record. I probably took a lot of influence from that when I was thinking about putting together our LP, Dream Gig“.

It feels a little silly discussing such a goofy record this in depth. I could be completely wrong. These songs could be about absolutely nothing. I asked John what his favorite song was: “2 Twisted 2 Love U” really hits home with me. I don’t even know how to embrace real love […] It’s a goofy song, but sometimes I feel like I really am 2 Twisted 2 love anyone”.

Dollar Signs’ Dylan Wachman chats with musicians about the music that helped them navigate the hard times.