At the end of the Second World War, the Allies needed a place to hold the “trial of the century”, where the surviving Nazi high command was to be brought to justice for starting the war that killed fifty million people. Nuremberg was the only city in Germany undamaged enough and with a venue large enough to support the army of lawyers, diplomats, soldiers, and other personnel necessary for a production of that importance. It is somewhat fitting, if only by happenstance, that the Nazi high command was tried and hanged in that city — Nuremberg was where the Nazis held their massive annual torchlight rallies celebrating the beginning of their “thousand year Reich”. Seventy-three years later, a music venue and Biergarten sits on a small rise overlooking the prison where Speer, Goering, and other architects of the Holocaust met their ignominious ends.

Due to worse-than-usual German traffic on the way from Hannover, we arrived at the venue an hour late and without a pause begin loading equipment into the concert hall. While the band sound checked, I escaped to the backstage to find something to eat.

After the show and load-out we hung out with The Flatliners and Prawn outside of the venue drinking beer and peppermint schnapps. A heated ping pong competition began. I don’t remember who won, or if if anyone even did – our game was cut short by the venue staff telling us we were being too loud and had to leave. We said our goodbyes and piled into the van for the short drive to our home for the night. I got into bed immediately, tired and sober. I’ve been touring long enough to listen to my body when it tells me to take a night off and catch up on some sleep.

The first time I visited Prague was with my little brother in the summer of 2001 during our Great European Adventure. We chose Prague based on the recommendation of a friend, who reported that the girls were beautiful and the beer was cheap. We disembarked at the main train station after the day and half of traveling from Copenhagen, without a clue where we would be staying. An old man approached us while were at a pay phone, and with the help of a ring-bound laminated brochure and some broken English, convinced us to load our backpacks and ourselves into his tiny car. The car wound from the station through the narrow cobblestone streets of the old city, across a black stone bridge, and climbed the opposite bank into the diplomatic quarter. The laminated brochure didn’t lie. Our room in the stately white house had a million-dollar view overlooking the baroque spires of the old city center and the river, all for $10 a night (including breakfast).

My brother and I had intended to spend only a few days in Prague, but ended up staying a week. The reports turned out to be correct – the girls were very pretty and the beer was very cheap. Of the many good memories of my Great European Adventure, some of my favorites are from that week in Prague, before the world changed forever.

Two months later, at home in San Francisco, I was just waking up for my eight AM Mineralogy class when my roommates called me into the living room with urgency in their voices. I joined them in front of the TV just in time to see the second airplane explode into the World Trade Center. I did go to class that morning, if only out of shock and a need for some sense of normalcy.

This time in Prague I didn’t get to do any sightseeing — the venue is on the campus of the university somewhat outside of the city and too far to walk. The grey Soviet-style dormitory blocks surrounding the venue were offensively charmless, so I stayed inside most of the night.

On the drive to the sleeping place that night, we crested a hill and were greeted by a familiar million-dollar view. As we wound down the narrow streets past the stately white houses of the diplomatic quarter, I recognized a certain bodega, and on the opposite corner a familiar doorway. I wondered if the old couple still houses wide-eyed young adventurers, or if they’re even still alive after all these years.

When we got to the sleeping place, I wrote my brother to tell him that I drove by that old place, which is to say, in the language of brothers, I love you. 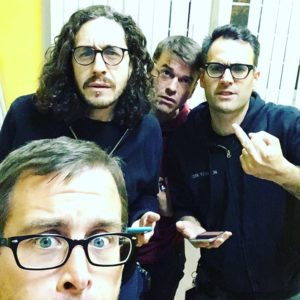