I like European style lager beer just fine, but my go-to style is West Coast IPA. Europeans usually prefer a more subtle hop presence than we Californian barbarians, so imagine my surprise when we showed up to the gig in Berlin and the backstage refrigerator was filled with a locally brewed West Coast Style Pale Ale that was very, very good. Superfreunde Brewery in Berlin was kind enough to donate five cases to the tour, and we hopheads on the tour were very happy to have a little taste of home in Berlin. Even the refined European and Canadian palettes enjoyed it.

Besides the beer, there was also a punk show, a climbing gym, and a skate park that made Berlin one of the more memorable shows of the tour. The day after was a day off for Not Scientists, so we did what one does on days off while on tour – laundry. We found a laundromat/bar not too far from the apartment and enjoyed a few liters of beer and a few intense games of UNO as the industrial washing machines strained to remove the tour stank from our clothes. Ed and Thib introduced me to French UNO rules, which are quite a bit more cutthroat than the sedate American family version. Three hours later, our laundry was finally done and we were ready to move the party to a new venue. Thibault took the clothes and the van back to the apartment while Ed and I grabbed a Doner Kebap and jumped on the U-Bahn towards Kreuzberg, the Rock ‘n’ Roll quarter of Berlin.

Our first stop was the Ramone’s Museum, a small three-room bar/exhibit chockablock full of rare and interesting Ramones memorabilia, including DeeDee’s bass amp, rare photographs, T-shirts, and other promotional material. After spending an hour or so walking through the museum and drinking beer, we chatted in the candlelit front lounge with Flo, the owner/curator while drinking yet more beer. I was on a roll.

Our next stop was just down the street at Frankenbar, THE place where touring bands hang out in Berlin. The Flatliners were already there when Ed and I walked in, and greeted us heartily. Punk, ska, and metal blasted from the speakers, as if three different playlists had been mixed up. The rest of Not Scientists arrived after a short while and a round of Mexicaners (basically shots of Bloody Mary) appeared from behind the bar. I don’t remember what time we finally left, but I do remember Ed and I missing our U-Bahn stop and having to walk a mile in the rain to get back to the apartment.

We nursed our hangovers the next morning in Spider’s (from Zatopeks) kitchen, sipping cup after cup of strong tea and tall glasses of water. Mercifully, Dresden isn’t too far from Berlin, so we weren’t in any rush to leave the clean and comfortable apartment and deal with being hungover in the van.

Dresden was once considered the center of art and learning in Germany, and also one of the most beautiful cities in Europe. Colorful baroque buildings lined the cobblestone streets. World-class universities, museums, and concert halls could be found in every quarter, and the cafes were full of visiting artists, writers, musicians, scientists, and dilettantes of the prewar era. The Nazis and the war had dampened the atmosphere, but the city remained largely physically untouched until February 1945.

Over three nights the British and American Air Forces launched thousands of bombers laden with high explosives and incendiary bombs. The city center was completely destroyed along with the art and cultural artifacts not already carted off or destroyed by the Nazis. The city burned so intensely that the heat could be felt inside the last waves of bombers flying twenty-thousand feet overhead. Civilians who had crowded into basements and bomb shelters suffocated by the tens of thousands as the firestorm consumed all of the oxygen. A week later, the ruins were finally cool enough to search through and recover the dead.

A young American soldier captured at the Battle of the Bulge a few months before was amongst the many prisoners of war pressed into service clearing the rubble and the piles of putrefying bodies. This experience made such an impression on Kurt Vonnegut, Jr. that he wrote a book about it named after the building in which he was housed during the cleanup operation – Slaughterhouse Five.

Dresden has since been rebuilt. Even the burned and bombed cathedral in the center of town that the Soviets had left a ruin as a reminder of the war has been reconstructed. A vibrant nightlife again buzzes in the cafes and venues downtown. Musicians from New Jersey, Toronto, and Lyon play loud music to raucous crows. All is back to normal.

The next afternoon we’re driving west down the A14 towards Hannover through rain showers and fog. The old border between East and West Germany comes into view – rusting guard towers and long-abandoned customs and immigration buildings manned only by the ghosts of the Cold War. Thirty years ago people risked their lives to escape across this border to the west. Today four Frenchmen, an American, and a Russian don’t even slow down as we drive past this relic. Tomorrow we’ll cross back over going the other way into the heart of what was a hundred years ago the Austria-Hungarian Empire. Everything is as it should be. 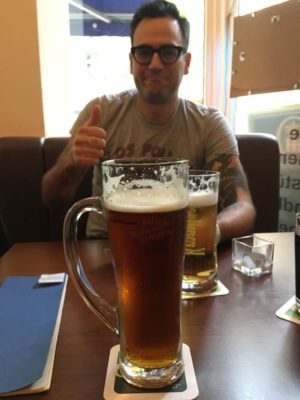