Last month, Brooklyn’s Giant Peach hit the road on a tour that took them from the East Coast into the Midwest and back. During this time, they were kind enough to keep a tour diary of thoughts, events, musings, and more to share with us here at Bad Copy. Check out the first installment below by guitarist Mike Naideau. 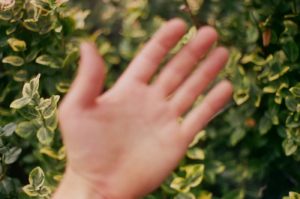 Driving through the rainy Shanendoah Valley with “Hold On Magnolia” by Magnolia Electric Company on the stereo. Last night in Harrisonburg, Jason Molina seemed to be on everybody’s mind. Appropriate tunes fitting for the weather and landscape these days. Whiskeytown hit the spot. On and off thunderstorms have been splitting up the intensely humid and sometime very sunny days. The van runs well though and the air conditioner is strong. I’ve been conscious of saying air conditioner rather than A/C, don’t ask why. Last night at the Golden Pony, I felt a connection with Ben unlike I have before. Just got a little more time in than usual. We spoke about music and he said he has never heard American Stars ‘n Bars, which in my opinion is a pretty perfect piece of art. Neil’s a genius when it comes to the flow of a track list and the dynamics of a record as a whole. He suggested Sweet Steel, an acoustic steel and guitar record. Said the whole thing isn’t incredible but it has its shining moments. We did talk about On The Beach. I said I’d send him a water bottle because he liked mine.

Connected better with Sam this time as well. Glad to have worked a bit on the Baltimore show with him. The whole Harrisonburg crew is hospitable and loving as hell. Danny got his insanely amazing Exploding Hearts-worship band Teenage Dream back together for their one show in over a year at the drop of a hat to help us out with a date on this tour. Very much appreciate having these folks in our network. 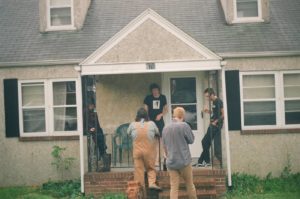 This tour has been very relaxing, positive and smooth so far. Our first show in Philadelphia set an incredible tone. The scene there is thriving and super intriguing to me. Dan set up for us what is truly one of the shows I’m most happy we were able to be a part of in a long time. Greg Electric, Goodbye Party, and Tact are three of my favorite current DIY bands, each pushing their personal boundaries in honest and expressive art. Very inspiring stuff. The kinda show that made me want to cry. Liz bought a record and we spoke for a minute about how well-curated and succinct, almost important, the bill felt. I have Dan to thank for that. I’m thrilled at how it came together and that we were able to participate, and be a part of the Space 1026 story, even if just for a night. 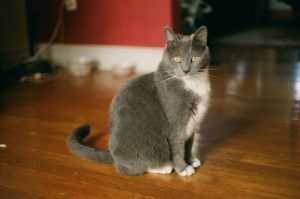 The morning after, we got coffee and some free fresh bread and pretzels from Marisa, then straight shot our way to an Ethiopian restaurant in DC that Chris knew about. I drove, and have been a little more than usual (recently). I used to not mind and, in fact, kind of loved driving. Never really cared how long. But more recently I’ve taken to being the passenger.

I’m still experiencing some waves of physical strangeness in my hands, head, feet, leg, here and there. It’s like a dullness, an internal movement, sometimes numbness. I had a partial seizure on tour in 2015, the most traumatic experience of my life I think. Recently had some flaring up of similar yet subtle sensations that make me worry. My doctor told me I exhibit more beta brain waves than normal for someone my age. Should be all alpha, but I have an unusual amount of betas mixed in. Anyway, so continues the continually and inconclusive and mysterious research project that is my life.

I’m reading The Einstein Intersection by Samuel R. Delany. Lo Lobey is not only searching for his lost love, but also on a confusing and indirect quest to discover what it is about him that makes him “different.” He learns music from others’ minds, and he can connect and exchange without words. I suppose in a way we’re all on our own individual kind of journeys to consciousness regarding what it is about us that makes us different. Experiencing reality is experiencing one’s reality. You can be behind the lens, but you’re seeing everyone and everything else through the lens. Cool to try to figure out how the lens works. Anyway I’m on some medication now, trying it out. No conclusive correlation yet, but just doubled my dosage, and almost just forgot to take the pills for the second night in a row! Gotta set an alarm. Silly how quickly when you’re moving around daily, constant stimulation from being in new places and experiencing new things, how easily you can shed routines. Comforting in a way.

Paesano’s had informed us that they had no heat and could only make cold sandwiches so we arrived to DC hungry. It was Luke’s first time eating Ethiopian food. Frances destroyed me in ping pong before the show, 21-10. Got to the venue at 8:45, drank a beer and had some small slices of pizza. After the most physically painful soundcheck of my life we got to catch up with George and Mike who both showed up early to see us. Playing was fun. It was a Don Giovanni “showcase” that came together but I think we were the only band to dedicate a song or two to Joe and to Dustheads. Frances just put Soul Journey on in the car. This record is one of my Top 5. We share an unparalleled musical connection, she and I. I’m snapped into my DIY seatbelt in the back. This E-350 is spacious and easy to drive. Good to know.

Anyway after the show we got to see David for a while. We closed out Red Derby. He seemed exhausted from working all day but is always so refreshing to talk with and down to hang and catch up after the show. He was just in a cartoon and was joking about already having spent all the cartoon money. We talked about cassettes, making music videos, and our friend who I had no idea was recently in a pretty bad bike accident. David’s a beautiful and solid friend who I will always have a place in my heart for. An artist whose work I admired before we ever even met. I remember when we were hanging out recently in NY, upstairs at Warsaw after their band played a show. We were in some kind of old classroom that I guess is a green room, listening to their band’s new mixes off of some computer speakers. Tour brings theses kinds of music-born friendships, which are often independently revolving worlds with minimal contact, into touch with one another, even if only for an instant. Mike, too, is another great friend in DC who is always down to hang and put us up when we are in town. I’ve never spent much time with him but get nothing but positive energy from his person. We talked about the one standout dissonant bass note in a new Warthog song, and about touring South America. The next morning Frances made some good coffee she brought with her, we explored the backyard, and the daughter of Mike’s house’s previous tenant showed up with a pretty emotionally cathartic display and story about her mother. We ate at a very chill bodega/diner as France silently won the World Cup. 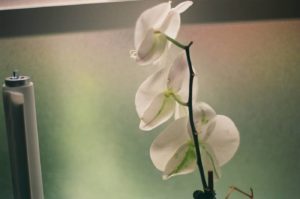 The sky is all shades of gray. Must remain sensitive to communication on tour in order to counteract moodiness peaking its head out. This morning, making aero press coffee with no shirt on, sitting on the stoop eating raisins and peanuts. “Friday the 13th tour, baby!” “It’s gonna be spooky!” Rain is picking up again. 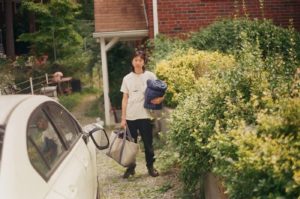 Day off and Frances has quickly come down with some intense sickness. Nursing her back to health now, from 0% to 50 to 75. While this was happening we all still managed to hike the Whiteoak Canyon waterfall trail and swim in the waterfalls. Someone along the way told us not to cross the river; they saw a black bear. The water was cold and full of tiny river worms that I had to pick off my legs but it felt like the most refreshing as hell shower to dunk my head under the rushing water. Laid down on a rock, closed my eyes and daydreamed of a bear coming up to me, sniffing my head, laying next to me as I did nothing but exude an energy of friendship and respect. I befriended this bear. Like “Grizzly Man?” Crashed at a cheap motel in VA, got takeout from Guapo’s. Half chicken with fried yucca and beans and salad. Good Will Hunting on the TV set a comforting scene for Frances’ miraculous recovery. Showered and drank seltzer and wine while she slept and sweated our what she could.