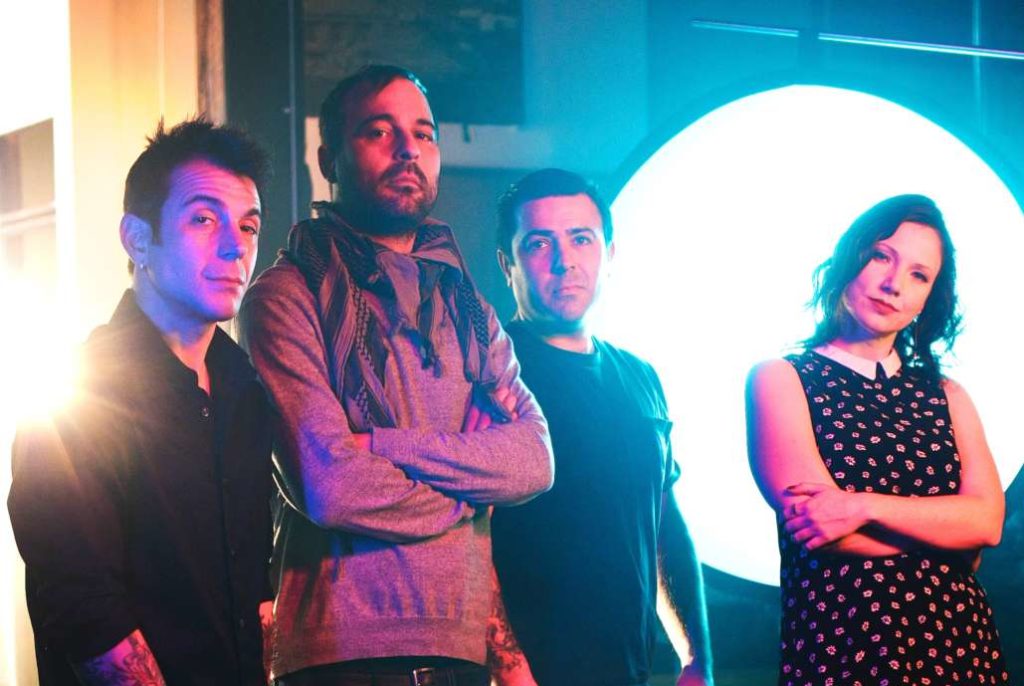 Other Americans has announced that they will be independently releasing their new self-titled EP on June 29th. They are a supergroup of sorts, comprised of members from The Architects, Latenight Callers, Radar State and Brandon Phillips, and The Condition. I had the chance to get to know them a little better and chat about the new EP.

You can also watch the video for “Murdering Crows” (Directed by artist Adrian Halperin) below:

How did you meet? What inspired you to make music together?

Adam: Brandon, Zachary, and I met by being brothers. It was a long time ago and I was so young. I barely remember the first few years. (Laughs)

Our studio engineer and trusted pal, Joel Nanos (Element Recording Studios), heard us talk about the idea for the band, and thought that Julie would be right for us. A taco date between Julie and Brandon happened and inside of a month we were having a band practice.

Brandon: I’d seen Julie sing with Latenight Callers so I knew she was a good performer, but we weren’t really acquainted beyond passing each other at shows. You don’t know someone until you break queso with them, not really. Once I felt comfortable enough to double-dip around Julie, I knew it was a go.

Julie: Yes, queso was key to us working together! Brandon and I met for tacos and wanted to see if we were on the same page about music and we were. Also, the queso was amazing, in case you wanted to know.

What genre of music do you consider your work to be? Who are your major influences?

Adam: The genre labeling game can be such a drag sometimes, but I love when people do a good creative job with it. Brandon was onto something when he described us as “Opulent Spendor-core.”  Another good one was “cinema-dub.”  My main influences for this band have got to be NIN, Morcheeba, and the Beastie Boys.

Brandon: Make-it-up-as-we-go-along-wave? There were songs on this EP where I know to a certainty that I was going for Jay-Z + Beastie Boys vibes and it worked out to my total satisfaction. And then there were songs where I was just sure we were doing a Morcheeba + Massive Attack thing, but when it was done it sounded nothing at all like either of those groups.

Whatever it is people end up calling what we do, I know that we’re starting from a kind of classic Alternative place. Like the original Class of 1992 120 Minutes bands. KMFDM was industrial-rock but what does that make NIN? Was Jesus and Mary Chain goth or not? What the hell was Jane’s Addiction? It wasn’t metal and it wasn’t exactly punk… I don’t know what we are but I know we’re doing ourselves a favor by choosing our influences from an abundance.

Could you briefly describe your music-making process?

Adam: This Record had a weird process. We came up with a ton of ideas and some basic arrangements of each song. They were just “jams.” Cool beats, cool bits. Then Brandon took they tracks and cut everything up, studied its guts, and produced the living shit out of it. Many Kudos were earned for sure, but it was a total mind-fuck for a while there.

Brandon: I’m really glad we went through the process as we did; the long writing period, the even longer re-imagining of the sound in the studio, etc. I agree with Adam that it was a total mind-fuck and I had some days working on this record that were among the most anxious and self-doubting of my life but we did finally get to a place we would not have reached otherwise.

Julie: We got together and developed a couple key melodies and beats. From there Brandon (B-Eazy) was the mix master of making it all come together.

What has been your biggest challenge as a band? Have you been able to overcome that challenge? If so, how?

Brandon: Our keyboard player and longtime friend Ehren Starks died suddenly this past spring just as we were gearing up to call the record done and get it released. There is legitimately no challenge from without or within that can compare with losing a close friend and bandmate. In the face of that, most of the other kinds of standard band drama are reduced to insignificant shit. You just press forward and have faith that you’ll figure shit out as you need to but you don’t really overcome it. Speaking for myself, I would not want to be over it. I’d rather miss him than forget.

Julie: Losing Ehren was for sure the biggest challenge and sadness I have ever experienced in a band. I am so glad he was able to play on the EP because it feels like he is still with us in many ways.

Other than the EP release, what can we look forward to seeing from Other Americans in the future?

Adam: Hopefully you can see us live on tour some day in the not too distant future. We’re working on it!

Brandon: Yeah, I really want us to play a lot of shows on this record and hopefully that will be the case.

Julie: All of us are ambitious creative people that can’t sit ideal too long. More will continue to be in the works for sure.

If you were all in a Koosh ball fight, who would win?

Adam: Probably Julie. I just have a feeling that she would come out with a professional baseball players pitching arm and I would take a koosh ball to the eye and give up right away.

Brandon: Don’t even… I’d fucking pummel all of you.

Julie: Ya… the fellas got nothing on me. Watch your back for sure!