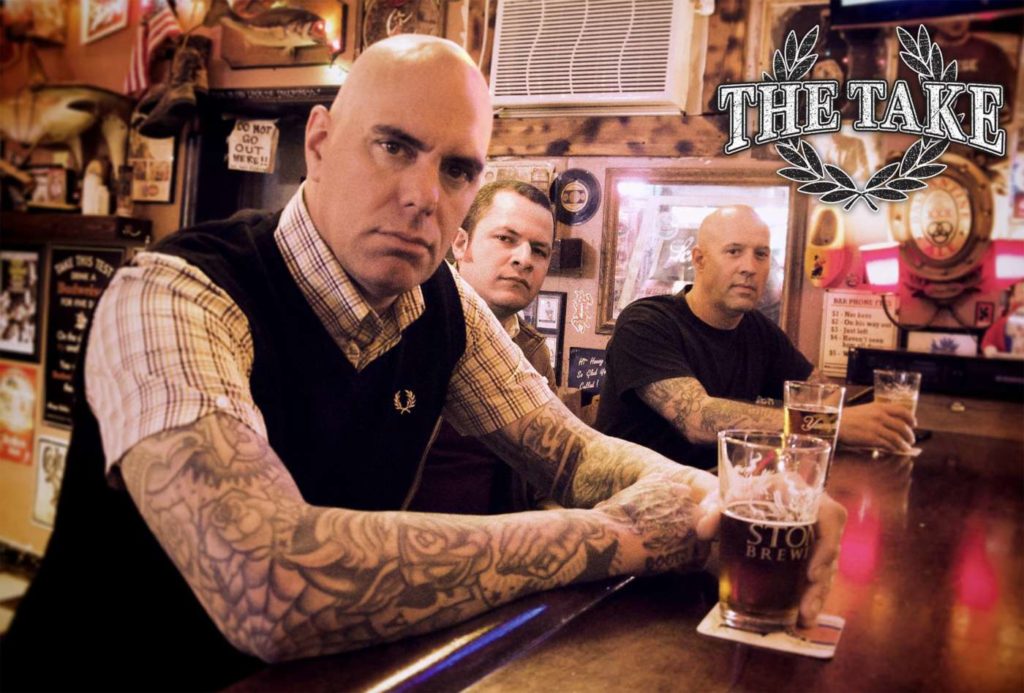 The Take is a band that’s made up of some heavy hitters in the world of punk. You’ve got drummer Will Shepler (Agnostic Front, Madball), guitarist and vocalist Scott Roberts (Biohazard, The Spudmonsters, Bloodclot!, Cro-Mags), and bassist Carlos Congote (Royal Hounds, 45 Adapters, Urban Noise, Legion 76). If you’re looking at these bands and thinking that you already have an idea of the type of music this powerhouse trio would produce, think again. Their mixture of street rock and roll, Oi!, punk, and hardcore delivers something unique and raw that showcases their collective experience.

Over email, I chatted with Scott Roberts about The Take and their debut self-titled LP available June 28th (Digital & Europe) and July 5th (U.S. and Canada) via Demons Run Amok Records.

So first looking at this line up, most people would say this is a pretty sick super group of musicians. Do you feel that’s more a positive or a negative?

Both I guess. I think when people see who’s in the band it might spark some interest, but they also might have a tendency to compare us to our old bands. Hopefully the music is strong enough that they’ll take it for what it is, because it just doesn’t sound anything like our old bands.

The Spudmonsters, Biohazard, and Amongst Thieves (a project you did with Will Shepler) along with other projects you’ve been a part of are definitely more in the hardcore/thrash/metal sub-genres compared to The Take. What was it about this project that made you and Will go in a more Street Rock & Roll/Oi! direction?

It was supposed to be a hardcore band initially. I started writing a couple really fast old school hardcore songs when we first talked about doing the band.

Then at some point early on I asked Craig Setari (he was supposed to be the original bass player) what style of music he wanted to play and he replied… “Whatever we feel”.

I said to myself, why didn’t I ever think of that? Don’t try to be anything, just let it happen. That’s when it started becoming more Oi! etc. Will really liked what I was writing so I kept rolling with it.

When Craig wasn’t able to do the band, how you decide on Carols joining?

Carlos and I had talked about playing together before. I’m pretty sure I might have asked him if he would want to fill in if Craig wasn’t able to play any shows. He’s someone I hang out with in my circle of friends.

It’s really important to me these days to be in a band with people I like being around and make playing music enjoyable. The same with Will. We’ve been friends a very long time and it’s great to hang out with him a lot again. We love playing with each other too. If people like what we’re doing, it’s an added bonus.

So talking about the new S/T album: Coming out with a full LP right out of the gate can be hard, did the song writing process come easily and naturally to the band?

It was pretty easy for me. I didn’t force anything, I just let it happen when it wanted to, if you get what I mean? It took a couple years for me to write it, but that’s normal for me. I definitely was a little nervous that I wouldn’t be able to write a whole albums worth of lyrics. I’ve never done that before and I always thought I needed someone else to write lyrics. Somehow it happened though and I have to say I’m really proud of myself. This is a big accomplishment to me regardless of if it’s a success.

The process basically was: When a song would come to me musically, I’d record a guitar track and send it to Will. He’d figure out what he wanted to play, record drums tracks and send them to me. I’d throw guitars and bass over it so I could work on my vocal ideas. When I felt it was close to finished I’d send the demo to Will to see what he thought (very little changed).

Later on, we rerecorded the songs for the album. Some of the vocals from the demos did make it on the record.

How was the recording process with The Take compared to other projects you’ve been a part of?

It wasn’t very different than recent records I’ve made like the Spudmonsters last record. I’ve been recording them myself because there’s just no money for recording budgets for small bands anymore.

I do miss the days of going into a big studio and just concentrating on playing, but it is nice to do things at my own pace. It’s a lot of work though, but I guess it’s a labor of love.

Tell us about your favorite song to play live off the new album and any meaning behind it and also why it’s your favorite.

Probably “No Tolerance.” It’s an anti racist song that has a little bit of a Motörhead feel with a lot of attitude and energy. It’s one of my favorites on the record as well.

I feel like artwork is such a big part of both Hardcore and Punk. Tell us about the album cover artwork and the chaotic scene it’s portraying.

I asked Muna Salik if he’d be into doing the artwork for us. He’s done artwork for a lot of bands that I’m into and I’m a fan of his work. He drew a rough idea that reminded us of Agnostic Front’s Cause For Alarm record. We liked where he was going with it so we just suggested he make a few changes.

We were thinking about calling the record Class War for a minute but decided it’s been used too many times. Eventually we asked Muna to make the theme of the cover ‘Class War.’ We think he did a great job!

Tell us about the music video for the song “Elitist.” Why did you pick that song as your single and were there any fun stories that came out of the shoot?

We picked that song because it seemed like it was the one most people liked the best, honestly. We had a really great time making that video and, in my opinion, it perfectly represents us. I can’t thank Drew Stone and Jeff Pliskin enough, they killed it.

We started at 10AM and the first shot was the bar scene. Everyone was drinking all day long. I think it’s safe to that by the time we filmed the live show, everyone was hammered!

Were there any possible names for the album or was it always going to be S/T?

I think “Class War” was the only name we were seriously considering. In the end we just couldn’t come up with something that we felt was great, so we just left it untitled.

It looks like 2019 is going to pretty jam packed for you with some shows in July with Old Firm Casuals and then a European Tour and then of course Midwest Live and Loud in my hometown of Chicago.

Anything else going on this year you want folks to be aware of?

We’re also going back to Europe in October to play with Cock Sparrer. We’re going to play a couple of shows around that, then we’re doing a mostly UK tour for a couple weeks with Agnostic Front in November.

We’re also trying to work something out for the West Coast and possibly the south for the Fall as well. I think the best place to find out what’s going on with us is on our website. You can find everything there. Music, merch, tour dates etc. We hope to see you on the road soon!