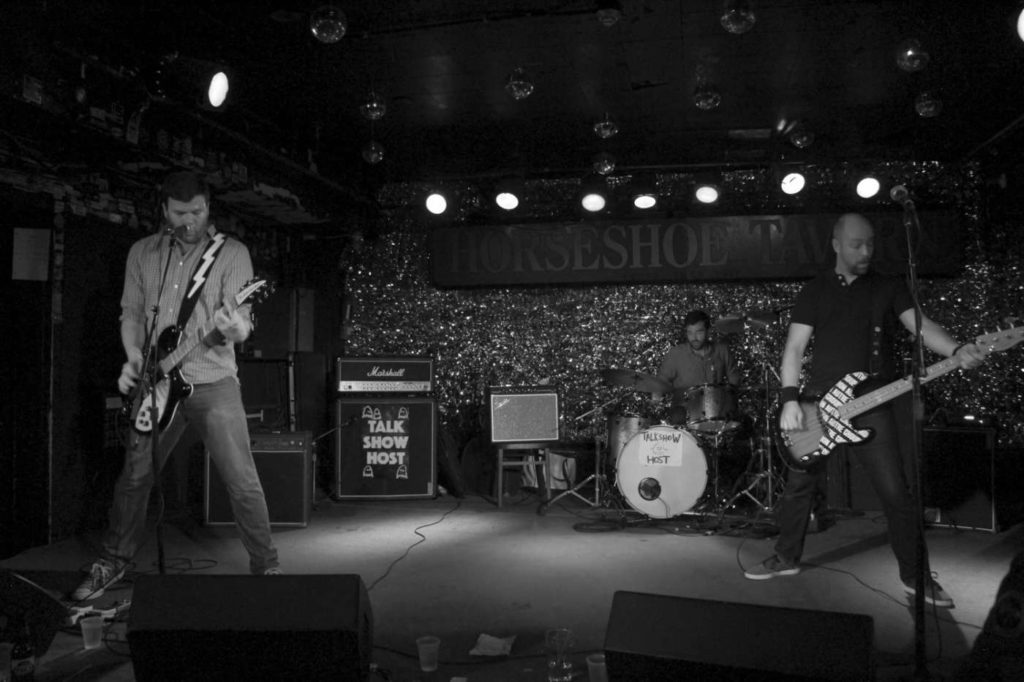 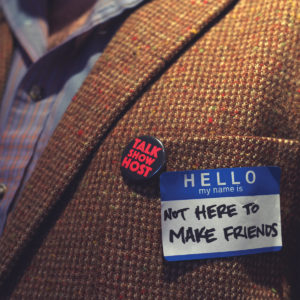 Not Here to Make Friends

When it comes to picking out music I’ve never heard before, a good band name can really make a difference. It worked for Nightmarathons and it’s how I came to listen to Talk Show Host’s third EP, Not Here to Make Friends. The trio has not so quietly been making waves in the Toronto scene. And it’s pretty clear from this latest release, big things are coming soon from Talk Show Host. The trio has been together for about two years crafting a sound that reminds me of the best power-pop bands around mashed together into a high functioning, hard hitting pop-punk band.

Opening with “Dead Meat” and “We’re Not Here to Make Friends” the tone is perfectly set for the kind of turbulence to expect. Loud, anthemic guitars greet you with big, boisterous vocal harmonies to carry you off to a higher plane of joy. I had to stop and investigate whether or not the former featured someone from Junior Battles, because “Dead Meat” could easily be a cut from Idle Ages. The second part of that knockout opening is a speedy, left hook that borrows heavily from the fastest MxPx songs and is the only track on the EP to clock in under the two minute mark, breakdown and all. By the time you realize what just happened, you are definitely left wanting more.

The middle of the album features a jaunty little ditty sure to please the further reaches of the internet, “I Hate Men”. The chords and rhythm are upbeat while the lyrics paint a picture of the wretched behavior men are infamous. Guest vocals from Madeleine Maynard pull no punches as she critiques how it feels to be on the other side of unwelcome advances. It’s definitely the kind of song that will quickly determine who the assholes are at a show. If you think you’ll find yourself in the latter group with your arms crossed for this one, go ahead and fuck right off now so you can save yourself the trouble later.

It’s weird to think that a five song, 13 minute EP could ever overstay its welcome. But with the last two songs clocking in as the longest, that’s what happens. “Watch Him Fall” and “Nervous Wreck” are by no means bad tracks; it’s quite the opposite, in fact. They’re slower, with a more Sidekicks/Weezer-esque pacing, and are a lot of fun to sing along. I can see them being big hits when performed live. However, the time it takes to get to the payoff makes them feel like the kind of songs that would be a better fit elsewhere. I can appreciate the diversity in the songwriting the band showcases, but I found the tonal shift rather abrupt and a bit distracting for such a short offering. I’m glad these songs exist. It’s just that with the blistering pace the EP opens, these tracks would be a better fit closing out a LP.

I’m keeping my fingers crossed that the time for finding their footing is done and that we will soon get a proper full length from Talk Show Host. Not Here to Make Friends is the latest in a line of strong offerings from a band who is plainly having a blast making music that matters. Don’t sleep on this one.