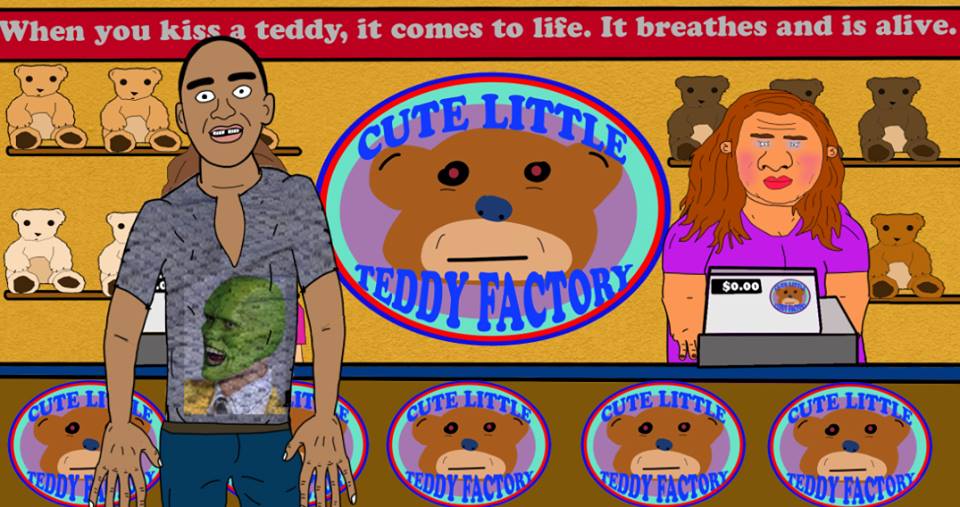 A few years back, I noticed a few weird posts on my Facebook feed. They were all penned by someone named Kimberly Strubell, who I didn’t exactly remember adding. The topics ranged from rants about her place of employment (Build-A-Bear) to her love interest (a man name Larry Nabisco who used to be in the Coast Guard and eventually would start his own account) to her son Kent. It didn’t take long to become part of the joke.  However, it did take me much longer to figure out who was behind the ever growing amount of social media accounts, each which left me delve further into the world of the South Shore.

Tomorrow, January 15th, Boston comedian Dicky Stock will be celebrating the release of his animated feature SexCoward. For one night, the Model Cafe will be celebrating not only the Boston Molasses Disaster 100th Anniversary Remembrance Party but also Strubell and her family. The doors open at 8PM and the screening starts at 9 and will also feature a stand up set by Stock, an acoustic performance by Mickey Rickshaw, photography by Chorale Miles, and poetry by Liz Stan Blake.

In the cartoon, Stock brings his beloved parodies of the sleazy South Shore social media posters listed above to life for the very first time. Dubbed by fans as the “Strubellverse” (named after Kimberly herself) the characters in Stock’s world are reminiscent of those you’d see in a John Waters film—if any lived in the South Shore and had access to a Facebook account.

SexCoward follows the family of Strubell and her fiancée Larry Nabisco in the made up town of Frampton, Massachusetts. Nabisco, he patriarch, is the owner and operator of the Cute Little Teddy Factory (a stand in for Build A Bear). Larry spent years in the coast guard, worked for various children’s magazines, was acquitted of murder twice (including the death of his ex-wife), and is surrounded by a thick cloud charisma. His fiance Kimberly Strubell—with whom he shares an open relationship—is an incredibly filthy, oversexed, rotten bitch with a heart of gold. She manages the cute little teddy factory, loves cigarettes, and maxi pad culture. SexCoward features music from local Boston bands Idiot Genes, Kal Marks, and Zip Tie Handcuffs.

Stock had the following to say about SexCoward:

“I love the South Shore, but I think everyone can relate to the archetype of a trashy Mass. local — I created the Kimberly Strubell character as a satire of that kind of person,” Stock said. “I started by collecting bits and pieces of people’s personalities and other experiences from my own life, and soon I had a number of characters. After spending almost a decade developing these characters on a daily basis, making a cartoon felt like a no-brainer.”

If you are in the Boston area, make sure you head over to the Model Cafe on January 15th at 8PM and catch SexCoward!