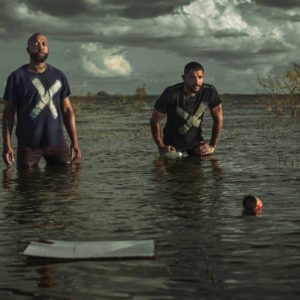 BLXPLTN (Blaxploitation), from Austin, TX, has been described as having a politically-charged punk industrial sound. These multi-instrumentalist music veterans are quickly gaining international recognition and support by those attracted to both their radical sound and their championing of social justice for people of color, the LGBTQ community, women, immigrants, and the generally disenfranchised, forgotten members of society. Their critically acclaimed debut record, Black Cop Down, produced by Autry Fulbright (…Trail of Dead, Vanishing Life) and Elliott Frazier (Ringo Deathstarr), with early tracking by the late Ikey Owens (The Mars Volta, Jack White), was released in October, 2014. On Halloween of 2016, the band released their highly anticipated sophomore record, New York Fascist Week, also produced by Fulbright and Frazier, to rave reviews. They were invited to play the groundbreaking Afropunk Festival in Brooklyn in both 2014 and 2016 alongside the likes of Janelle Monae, Bad Brains, Body Count, and more, and are Red Bull Sound Select artists.

In January 2017, The former duo of drummer and vocalist TaSzlin Muerte and guitarist, singer, and synth player Jonathan Horstmann welcomed drummer Jeremy Kivett to the lineup. They are currently completing their third studio album, from which the first single/video, Education Destruction, dropped October 2017. The band continues to work for the rights of all peoples and encourages correspondence and involvement.