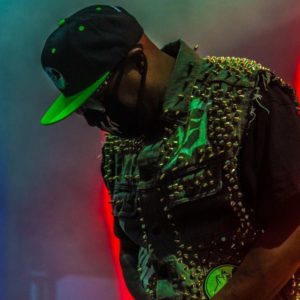 Hailing from the brutal streets of Detroit, producer, lyricist, and urban storyteller Esham rose to legendary status at the young age of 15 when his debut album “Boomin Words From Hell” sold over 100K copies solely by word-of-mouth. The infamous and highly coveted “red tape,” detailed the perils of growing up young and black in a city ravaged by the American crack epidemic.

The drug use, violence, and death that had become a part of Esham’s daily life left him questioning the existence of God. He blended this religious concept with the outrageous, sexual, and drug-fueled personas of rock stars, Kiss, Ozzy, and Prince. This new sound was unlike anything anyone had ever heard.

Esham’s vision and creativity was the catalyst for an entire genre, and his entrepreneurial spirit created the blueprint for independent success in the music industry. Despite remaining largely unknown outside the underground music scene, Esham has amassed a following of devoted fans with his experimental approach to hip-hop, and a “fuck the industry” attitude.
With 50+ releases and counting, Esham continues to blaze his own trails and reinvent his sound – giving fans and critics – something to talk about.