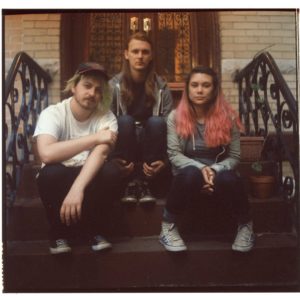 Fat Heaven is a Brooklyn punk band that was founded in the summer of 2014. After penning a few tracks in a small apartment, the trio consisting of Travis Yablon (guitar), Gayla Brooks (drums), and Jack Counce (bass) recorded what would become their debut self titled EP that was released through Canadian punk label Chisel Records in 2015. The three now live in a house together in Brooklyn where they run a DIY venue out of their basement dubbed “Moffat Heaven.” In this very basement the trio recorded their first full length titled Tough Luck that was released through local label Mirror Universe Tapes in late 2016.