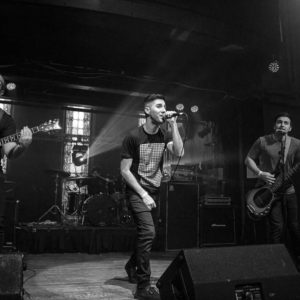 Mace Ballard was formed around the heart of Pittsburgh, PA in 2009. With a distinct sound that blends the attitude an energy of modern pop-punk, and raw, old-school punk rock ethos, the band polishes off their glossy-yet-edgy production with powerful and triumphant rhythmic instrumentation, harmonious sing-along vocal and spastic, heavy-hitting percussion. Their first full-length album, “The Next Time You See Sky” (self-released in November 2011) has since achieved a strong and supportive local/regional fanbase, and has helped the album earn recognition as one of Pennsylvania’s top DIY punk records of 2011. With tours spanning the East Coast, Midwest, and South already under their belt, Mace Ballard will once again put on the miles in 2014. They will travel to new cities and states, as well as continually playing countless hometown and regional dates. The band will be heading back into the studio to record their follow-up EP in early 2014 with Chris “#2” Barker of Pittsburgh’s Anti-Flag. Hold on to your dicks.