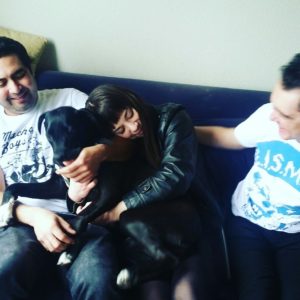 PISS TEST formed in Portland, Oregon in 2012 when former Red Don, Zach Brooks, brought up the idea of starting a punk band with drummer, Rodrigo Diaz. Rodrigo had the idea to forgo looking for a bass player, and teach Zach’s better-half, Samantha Gladu, to play. They figured the last thing the world needs is another band with three aging dudes. After all, the couple-plus-a-drummer lineup worked for Dead Moon. And like Toody before her, Samantha quickly became the driving force of the band, making it her mission to encourage women to start bands and telling the creeps to fuck off. But what’s with the Dead Moon references? PISS TEST don’t sound like Dead Moon! None of them even own a leather vest. If you need a more specific reference, think about the angrier side of early Texas or SoCal punk, with a dose of the Great Pacific Northwest (where bands can’t help but sound a little bit like The Wipers). PISS TEST have also had several comparisons to Proletariat, which they weren’t really going for, but don’t complain about.