In July, Brooklyn’s Giant Peach hit the road on a tour that took them from the East Coast into the Midwest and back. During this time, they were kind enough to keep a tour diary of thoughts, events, musings, and more to share with us here at Bad Copy. Check out the third installment below by Frances Chang and check out Chapter 1 & Chapter 2 now!

On the drive to Pittsburgh, Chris puts on the second Whiskeytown record and it’s hitting the spot. Kim and Ryan welcome us to their city and home with beer and pizza. I sit outside on a swinging bench for a while before going in. Still having some trouble staying present. Worrying about things at home, things I can’t control. When I finally go inside, it’s a little vow to turn the page on this place I’m stuck in.

I challenge Chris to a game of chess. Never got too good at it, which I think is indicative of difficulty with delaying gratification. Manage to take my staggering loss lightly even though I am typically competitive when gaming. Chris has one of those encyclopedic brains, memory that must stem from pure interest. I have a more fluid style of thinking, philosophical and analytical – sparked into action by conversation. But being around Chris and the sheer vastness of his information database is making me realize I want to curb my ignorance, educate myself, keep up with my communities and the world around me, know my history.

The Rock Room is Pittsburgh’s crusty dive. The bar is filled with cigarette smoke. I’ve smoked cigarettes since I was 17, but it’s been so long since I’ve breathed that kind of air. Sit outside for a while and watch the sunset. And smoke a couple cigarettes. There’s an amazing view a little ways down the block toking out on a giant lot completely overgrown with super lush leafy vines, the layout of the city in the distance. 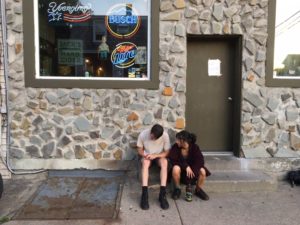 We play a more upbeat set tonight. Sell some records. The room is pretty full, people seem to be digging it. After we play, I enjoy a smoke and a $1 Yuengling and 10 minutes of Rush Hour. Feeling considerably cheered. Derider plays after us; they’re cool. I’m mesmerized by the bass player’s parts.

The party crescendos sharply as Kim, tearing up from her asthma, buys everyone shots. I’m still recovering from my flash fever, but I remember something someone told me in college. “You gotta drink the sick away.” Colds really seem to last the same amount of time no matter what you do. Kim is remarkably sunny and cheerful and has an amazing laugh. Friendliness and good spirits go such a long way with me. I can’t always offer it. But when I can, I try to spread it while I’ve got it. Feeling greatly lifted by Ryan’s deep hospitality. We polish off some of Luke’s cheap sake. The room I’m sleeping in is an attic room with slanted ceilings and I gasp out loud as I walk up the stairs into it. So comforting.

Beautiful day; not a cloud in the sky. Sit for a while on the swinging bench outside. Do some laundry. Talk to Chris in the kitchen about what a great movie Hook is. Talk to Luke and Mike about wanting to open up my appetite to discovering new music again. Drink some coffee. Mike has a tune playing on his phone, “By This River” by Alva Noto + Ryuichi Sakamoto, which I immediately recognize as a Brian Eno cover. I used to put that song on my mixes in high school. Mike loves listening to music quietly through tiny speakers, a tape player or a radio, like the soundtrack is playing out of a real prop on the movie set of everyday life. 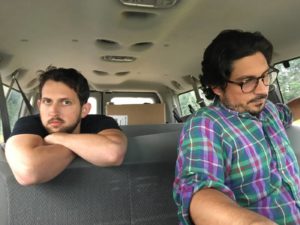 There are 222s all along I-76. There’s really nothing to do on the road, when you have no responsibilities besides playing a show every night, except to observe your thoughts. It’s one long meditation. And I can see, more clearly than normal, the thoughts that are leading to my moods. Up and down, around and around, the wheel turns. It’s inevitable to have bad moods, but the key is letting them go as quickly as you can. Accept. Do not resist.

We go to to the Mattress Factory and see some Dennis Maher rooms that remind me of a more utilitarian less whimsical Alice in Wonderland, or like the way rooms in houses in dreams represent parts of your psyche. Yayoi Kusama infinity rooms. A James Turrell piece instructing you to walk up a ramp into a quiet, pitch black room, and sit there for a while until you “see” it. Mike and I are the only ones of our party who want to sit there for a while. A middle aged-sounding lady bumbles in and starts sputtering about how ridiculous the piece is. She keeps turning on her cell phone light and messing it up. I am a little irritated and say, “Well… that’s inconsiderate.” Her daughter ushers her out. There’s a sense of relief as Mike and I are finally left alone in the dark of the room. Mike and I are bonded in this way, in our state of surrender, in this space, at home in stillness, emptiness, blackness, solitude. A gentle fusion with yin. 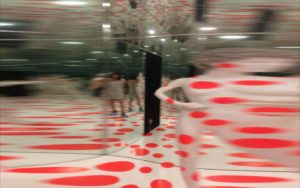 Instagram sucks. Talk about not being where you are. I’ve trying to make a post for everyday of tour but I just can’t bring myself to look at it anymore after Day Two. If I don’t buy into the current direction our collective reality is headed, am I making myself obsolete? I’m sleeping horizontally in the backseat. Mike and I are slowly “curating” a “summer playlist” that a blog wants to publish. Mike has always influenced my music taste so much, but I think it’s mutual and is mostly a huge natural overlap in such a specific personal conglomeration of all the nuances and energies in art that speak to us. Mike is so alive in his perpetual and uninterrupted discovery and consumption of music. It is a soundtrack to his life. I’m like that sometimes. I have short bursts of ecstatic growth and discovery – but I fall out of it, into hermitage. Many things on the mix are things Mike has been listening to recently. I struggle to bring the same contemporary resonance to my own contributions. I still listen to a lot of things that have slowly accumulated throughout previous periods of life. 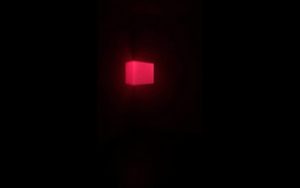 When Al and I were on tour in Binghamton earlier in July, we played a show in Pete’s backyard and Hunter played an Underground River set. Later that night, Hunter put a song on in his car, “The Bag I’m in” by Richie Havens, saying I’d like it, the chord changes. Fantastical, otherworldly, kind of ancient and haunting. Now, I think about putting it on the mix. It’s a Fred Neil cover; as far as I know he was a folk songwriter whose songs gained fame when other people recorded and sang them. Coincidentally he was born in Cleveland, where we’re headed today. I burned my fingers on the coffee pot / Toast was cold and the orange juice was hot / I should start over but I’d rather not / Same thing gonna happen again / ‘Cause that’s the bag I’m in. Summer is just like any other season in that, the wheel keeps turning. Does summer music have to be sunny? It’s been raining a lot on this tour.

Paul messages us out of the blue. He’s our original drummer. Technically Giant Peach has been a band since 2010 when Paul, Mike and I played our first show in Germantown, NY under that name, and recorded a full length album — full band arrangements of solo songs from Mike and my respective bedroom projects. We didn’t have a bass player. We stopped playing with Paul that year and started playing with Dave and neither of us have really been in touch with Paul since graduation, if not before that. Sometimes I wonder if we should have let the name go and started over when that lineup fell apart. I think there was a sense of wanting to build and a frustration that it wasn’t working. Now I see the wisdom in letting things die and starting over. But I’m still trying to feel out when that natural end is. 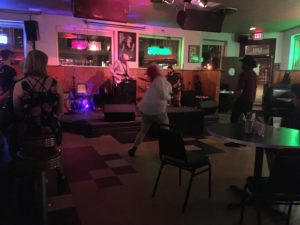 The last time we played Cleveland was 2009 in Paul’s parents’ garage. We didn’t even have a band name then. I remember David Himelman was there for some reason. Tonight we’re playing at Happy Dog. We pull up with some time to kill. This is one of those dud shows. Paul even says that the place has a built-in crowd, and that tonight is conspicuously dead. This show is beyond crazy. Somehow my spirits are dissociatively high. We play a long set of ballads that we don’t normally play. The only people in the audience are a few families eating their weird novelty hot dog dinners, the bartenders, and a pink-haired girl who is here to dance. She is an amazing dancer, dancing to each set with the same gusto and presence. I admire her lack of discernment. She makes it all sound good.

We stay over at Paul’s house, a little log cabin that strongly smells like wood. Paul mixes us some drinks and we have them out back where there’s a little man-made pond with running water and some tiki torches. We shoot the shit. Paul is DJing the night from a speaker strategically placed in a window screen. We talk about how “Tugboat” is by far the best song on that Galaxie 500 record. I tell Paul about all our friends from school I’m still in touch with and what they’re up to and how I’ve been drinking a lot less the past couple years. He says he’s been drinking a good amount. He says he’s been working overnight shifts as a nurse a couple times a week and that he’s practically nocturnal. Hanging out with him feels like we’re back in school. Nothing has changed. It feels good. I make a meme about Notches being the Powerpuff Girls, post it around 4 am, then chicken out and take it down. Paul and I are the last men standing that night, closing it out around 5 or 6 AM, giant vodka sodas in hand.