No biggie, but this month highlights one of the greatest performances I’ve ever seen, and also features a boat chase through the canals of Amsterdam.

But first, if you’re not aware of the venerated venue 924 Gilman Street in Berkeley, California and its monumental influence on the greater cultural landscape, might I recommend that you check out the Turn It Around documentary to provide you better context for the story I’m about to tell… 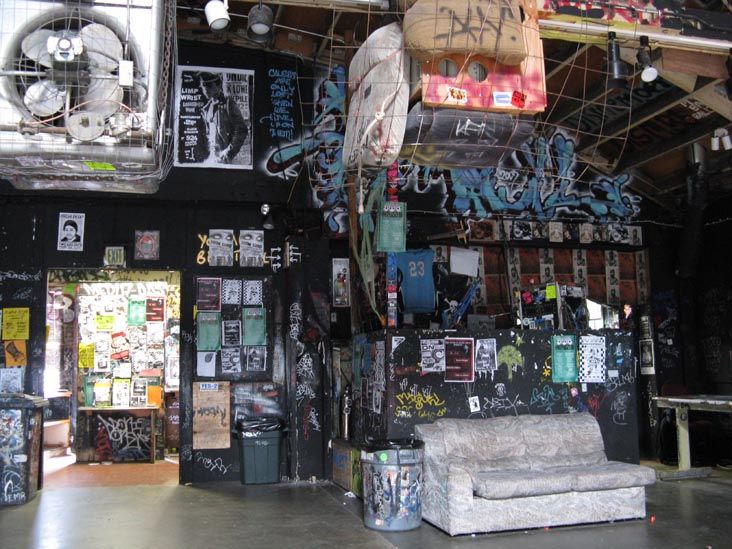 Another night at Gilman… The bill is stacked with brooding, black-clad Hardcore bands who rally against stuff like the system, oppression, and smiling. It’s an environment thick with reminders of how shitty the outside world is. Everyone in the room identifies as “pissed off” and someone is literally screaming at the top of their lungs through an amplified PA. (Honestly, I like this kind of thing but it doesn’t always lift the spirits.) And yet, somewhere in the middle of this apoplectic atmosphere, an unknown outfit from Canada named Muscle Bitches is also scheduled to play.

I am immediately turned off by the name. I generally shy away from both muscles and the word “bitch” but, as you may have noticed by now, I must have a thing for bands from Canada (one-third of my columns here so far have featured Canuckistan artists).

Each member of the Muscle Bitches take to the stage wearing something inappropriate.  In most cases their attire is simply inappropriate for a dark, angry Hardcore show where every other person in the room is donning some messed-up haircut and crusty, mangled clothing held together by band patches and grime.  ut some in the band are dressed inappropriately in the most general sense; one guitar player is wearing only a leather thong, the other wears a unitard and a dildo strapped to his chin, and in lieu of a shirt the backup singer wears only their band’s stickers over her breasts. Furthermore, each of their guitars are half-scale replicas of classic Heavy Metal designs – an Explorer, a Flying V, a double-neck SG… (To be clear, these are not junior-sized guitars, these are even smaller.)  Eventually the lead singer comes forward. He is wearing a skintight black lycra karate-style bodysuit with a red sash and a V-neck that exposes 75% of his chest. He is coifed with long, blonde-streaked, tightly-curled hair and a puddin’ line mustache/beard. He addresses the audience with a microphone fashioned out of an old telephone so that later, when he’s singing into it, he looks like Lemmy yelling at some poor customer service agent on the other end.

They haven’t even started playing yet you can feel the room’s collective consciousness palpably turn against this band. Rude comments can be heard, eyes are rolled, and opinions on Heavy Metal are made clear. Unlike the rest of the audience, my small group of friends and I never un-loved Metal and so we are keen to be shredded at. Plus, we are very much starting to appreciate the band’s perfunctory attitude.

They open with a fist-raising power anthem called “Mock Rock.”

You mock Rock but I said hold thine tongue
Stay with the women whilst we murder the young
Your Viking horn is where my codpiece is hung
You dare mock Rock??

This flagrant celebration of Heavy Metal, and their larger-than-life theatrics do not go over well.

They follow it with the equally anthemic “Metal Heavy (Is Your)” whose chorus asks the questions:

Is your Metal heavy?
Is your Zeppelin Led?
Is your Sister Twisted?
Is your Motör head?

The song ends in grand arena Rock fashion with duel guitar solos played over five key changes. Windmills were whirled, hair was whipped, bedazzled legs were kicked high, the back row was played to. Think Iron Maiden at your family’s Thanksgiving dinner or Manowar at your 7th grade school dance: a bombastic spectacle exploding in the absolute wrong setting.

It is everything I love in a band – it rocks, it rips, it rages, it is funny, it has presentation, it requires deep commitment and teamwork, and it is generally disliked by everyone around me.

And oh, how they were disliked! To be fair to the crowd, they were mostly there to slam dance grumpily to scowling bands while burping up Boones Farm before leaving to go untie their pit bulls from the bike rack outside. What they were not there to see was, as I alluded to earlier, ONE OF THE GREATEST LIVE BANDS I’D EVER SEEN. They were not interested in a sex Viking singing a 9-minute version of Accept’s “Balls to the Walls” – in German – or a Queen-caliber opera about wanting to be a hair stylist (“Follicle HEY / Follicle HO / I sail a permanent wave of sorrow”). While most of the crowd expressed themselves with crossed arms and condescension (or, at best, abject indifference), one of the punx up front made his displeasure known by spitting on, flipping off, and all-around berating the band throughout their set. The band remained remarkably unfazed by this behavior. Rather, they seemed charged by it and the singer, with some of the most powerful pipes to ever serenade that room, treated the audience like a Rock n’ Roll congregation. His Rock n’ Roll congregation.

That is, until the disgruntled punker up front managed to rip the cable out of the singer’s micro/tele -phone.

Suddenly, the frontman’s front was shattered. He commanded the band to cease playing immediately, and even they were taken aback by this sudden shift in his mood. The rest of the crowd also fell silent, now suddenly quite interested in this Canadian Metal band. The singer singled the offender out from the foot of the stage. Everyone backed away from them both, leaving an open chasm between them and a wide berth around them.

Whether intentional or not, the vocalist manically pointed a finger at the malefactor in a manner completely like that of Neidermeyer in the Twisted Sister videos.

“YOU! YYYOOOUUUUUUU……,” he growled as spit dangled from his lips. “DIDN’T I….”

The whole room was deathly quiet as the culprit’s previous bravado slowly morphed into shameful indignation. He looked around for backup but found none.

A beat passed while the room stood quiet and confused, especially the recipient of this…insult?

Then, slowly, laughter rippled throughout the venue. This punk rocker, with his limping mohawk and ratty, patchy clothing and snotty attitude was suddenly recognized for what he was… a kid. Probably no older than 15 or 16. Eventually, everyone in the room was whooping and roaring – and just like that, everybody loved the band. Everyone except the kid, who was being laughed at on all sides.

It started as a situation that everybody who has ever been in a band has experienced at least once – playing to a crowd who actively doesn’t want you there. But to not only face that adversity but actually thrive in it, and then to finally conquer the non-believers, is brilliant and a scenario every gigging geek can appreciate.

My friends and I (already converts from the second song) bought shirts and records and evangelized the Muscle Bitches with impunity from that day forth.

Here is a sample of how Gilman was won:

When the band came back through town a few months later they had a noticeable buzz around them (for which I proudly felt partially responsible). This time around they were playing at the much more welcoming Chameleon, in San Francisco. The place was packed, so much so that the neighbors were already put on edge before the show even started.

Sure enough, the cops came and pulled the plug just as the Muscle Bitches started playing. Not to be deterred, the band had the club put their CD on the PA and then every member proceeded to lip sync to the entire record with absolute conviction. It was the kind of event that separates people who merely get up on stage and play music from A TRIED AND TRUE, AUTHENTIC, BLOOD AND GUTS, GENUINE FUCKING ROCK N’ ROLL BAND.

These two Muscle Bitches performances defined “commitment to the bit,” a quality I hold in the highest regard. And, as such, this places the Muscle Bitches in My Top 5 Best Live Bands of All Time.

I tell you all this because their singer, Sam Newton, SINGS ON THIS LOVESONG OF THE MONTH!!!!

Being such a fan of the band I have quietly been following Sam’s career, which of late has revolved around making a high-energy radio theater show for children called Scarlett and the Treasure Map. I was all, like, hey, you wanna sing some songs I’ve recorded? He was all, ok cool. I was, like, I didn’t write any of them, it’s just cover songs. And he was all, yeah, no problem eh. And I was all, here’s the songs, and he was all, I’ve never heard these songs before, and I was like, so? And he was all, right ok I’ll have something for you in a couple days, and I was all, yeah right on!

So here is the first of a few tracks that he and I have been working on together. Some, all, or none of the others may or may not see the light of the internet eventually. We’ll first have to see how well a Boz Scaggs hit from 1976 goes over with the kids today. As you’ll see in the video below, Sam also provided the baritone sax (apparently an instrument which isn’t just used in The Muppets).

And for the melody over the bridge section I requested the services of Frank “session ringer/Simpsons quote zinger/fellow The Love Songs‘ guitar slinger” Piegaro. Being freshly grounded from his constantly postponed tour with Worriers I can always count on him to diddle a song to climax. But who knew he could also pilot a boat and do his own stunts?

Oh, that’s right, there is a guitar solo AND A BOAT CHASE IN THIS VIDEO! (Spoiler alert: Frank dies in the end.)