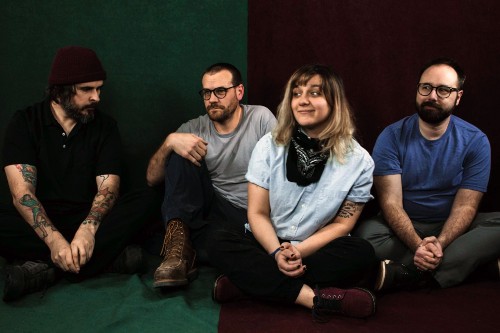 Springfield, IL’s Attic Salt will be releasing their sophomore album on September 25th. The ten song LP, titled Get Wise, displays a collection of unabashedly honest Pop-Punk songs which build on the band’s elf-titled debut (released October 2017). The album was recorded, produced, mixed, and mastered by Luke McNeill (The Copyrights, Starter Jackets) at Capitol City Recording and will be released via Jump Start Records.

Today, we’re so very stoked to be premiering a brand new single and accompanying music video entitled “Undiscovered” from the upcoming album. Watch the video below, pre-order your copy now, and keep scrolling to read a fun interview with Attic Salt!

What was it like heading into the studio a second time? What did you learn
between the recording of your first album and this one? What, if anything, did you do
differently?

Andy: It was all very familiar and comfortable since our friend Luke McNeill was
recording us again. He makes things extremely easy. One difference is there are more
songs on this record where we worked out the arrangements during recording versus
practice and shows.

Alyssa: Recording this album felt a lot like recording the first album. I don’t really feel like all that much has changed between the first and second album.

Fred: A few songs were unfinished this go around entering recording. We recorded again with Luke, so it makes it super comfortable for all of us.

Skip: I was not in the band for the first album, but I have recorded with Andy and Fred before. Same feeling, different room.

Can you speak to the inspiration behind the new album? Are there common themes that
arose in the writing?

Alyssa: We write songs based on our own day to day lives and the ones we think are good
we record and release. It gives the album more variety, I think. But maybe that just shows
that we usually have no actual plan when we do this.

Andy: I definitely had no plan with these songs. Some of them we’ve been kicking around for a few years, some we wrote leading up to recording.

How is the band dealing with the pandemic (ie – FB live streams, etc.) and what are your
plans for moving forward during these unprecedented times?

Andy: We plan on doing some live stream stuff to support the new record, but for the most part we’ve been laying low, working our day jobs and trying to stay relatively sane. I’m just looking forward to playing shows again, and hoping enough venues survive for small bands to still have a place to do that.

Alyssa: Basically, what Andy said. We were never incredibly active before the pandemic. But we definitely played shows often enough that I miss it. I’m eager to get back playing shows, but not until it’s good and safe for everybody, pandemic speaking and otherwise.

Fred: It’s nice to have things to look forward to. Band activities were that for me.

What is your weirdest tour story?

Andy: We really haven’t toured a ton, but I’ll always remember the sound system at the house we played in London, Ontario. Sometimes when I’m down, I still think about it and it brings me back up. Yeah.

Fred: Not on tour, but we plowed our way to Springfield to Chicago during a snowstorm. A three hour drive turned about six. Definitely wasn’t the smartest thing to do but hey, the raving crowd at the Burlington was waiting.

Skip: I have only been out with this band a few times. The first time we drove six hours in a blizzard to play in Chicago, the second time, we played a burlesque show, I single-handedly placed a diners bathroom out of order, and then Coronavirus shut everything down the next day. I am looking forward to having some non-weird tour stories.

I know that this is a totally trite question but, I have thought about this when I first
heard you all years ago. Where did your name come from? What does it mean?

Andy: Probably like a lot of bands, we didn’t have a name until we played our first show. I
remember there were a couple other ideas but I guess Attic Salt was the one we all hated the
least. It’s just another way of saying someone is dry and witty.

Name the first thing that each of you is going to do when the pandemic is over.

Andy: It sure would be nice to meet some friends for drinks at the local tavern.

Fred: I think I’ve gotten too comfortable being inside. I’ll just stay here.

Skip: I agree with Andy. I miss sitting at a bar with buds.

Could you name a few of your favorite local (or statewide or Midwestern) bands
who inspire you.

Fred: I’m really into Time Thieves. I also dug back into my CDs to jam The Soviettes.
Love that band.