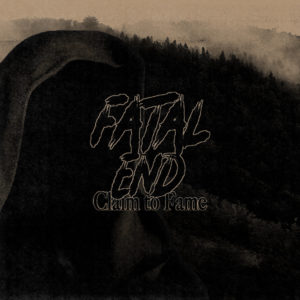 New Grand Rapids metallic hardcore punk band, Fatal End is coming out swinging with heavy hands on their debut EP, Claim To Fame. Like many others with their ears to the ground, I hadn’t heard that they were even a thing until about a week ago. It turns out they were waiting to make their presence known until they had a solid five song project ready to hit us upside the head with. And it was worth waiting because fans of Bridge Nine style hardcore bands are going to eat this up.

Fatal End packed plenty into the nine minute run-time. The riffs are eerie, the breakdowns are thick as the firework sulfur fog hanging over my neighborhood on 4th of July weekend, and the lyrics bite with intent to bleed. I can’t tell if the songs are aimed at a specific person, the negative state of corners of the scene, or maybe even inward, but they’re pointing at something and saying enough is finally enough. There’s no more room for cool guys. This is a reality check and a call to never let anything hold you back from what you want to accomplish. Each track sort of runs into the next, which seems appropriate for the simple and cohesive themes. But by the end of each, they’re able to find their own distinguishing aspects.

This is the next of a number of records I’ve heard this year that Addison Eilers had a hand in producing. I can’t wait to hear more from him as his top notch production continues here. It’s crisp but still has an edge to it which I prefer a heavy album like this to have over being squeaky clean. For only being four members, the sound is dense as hell. Hats off to Addison and the band’s own Sam Rottschafer, who helped with the mix, for bringing such quality to a debut whose band just barely started their social media accounts.

The microscopic length of this EP has me jamming it on repeat and as a result it’s stuck in my head and I already think these are five of the best heavy songs I’ve heard all year. It’s funny because like I said, nobody saw this one coming. Claim To Fame reminds me a little bit of when I heard When The Smoke Clears by Foundation for the first time. The perfect vessel to let your aggression out. I hope I get to see Fatal End live soon. People are going to get rocked senseless.

Anyway, here is my favorite parts of each track –

The opening riff sets the tone for the whole project. It sounds straight up evil. Like, what did you just get yourself into?

There’s this part after the second verse where all the music cuts out and the backup vocalist says “you’re the one who’ll fucking burn” and then goes straight into a grisly breakdown. I already know this is going to be a fan favorite live.

The beginning feels like it’s about to be a speed metal song. But when the breakdown hits, the guitars are so slow and drawn out I thought I was going to get crushed under the weight of it all. Think Crowbar.

You don’t hear a lot of call and response vocals in music this heavy, but Fatal End does it on the “you’re a liar” section and it’s so wavy.

There’s this sick guitar riff on the verse that’s basically a tremolo riff. I love it.