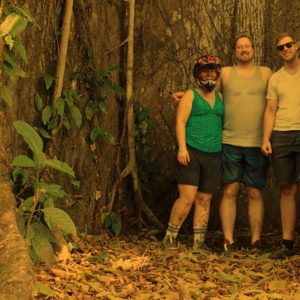 Nick Diener, Michelle Lukezic and Mark Michalik are best friends. On an adventure together in Costa Rica, it dawned on them that they should start a band after all these years. So they did.

One year had passed since Nick’s band The Swellers had hung up their touring boots and The Apology Tour started to come to life. The songs were slower and heavier than anything by the now-defunct punk band, utilizing guitar tunings lower than some of the most crushing metal bands. The melodies remain in the forefront, however, powered by Nick and Michelle’s vocal chords as well as the oscillators of a Moog synthesizer.