I did a very bad job of listening to new music this year. I just don’t have the same time or resources I did three years ago. It’s partially my fault, since I’m being a real post-youth and refuse to go to a streaming service. But even then it’s like, when am I supposed to listen to this shit? It takes me about ten minutes to drive to work, and besides that, shrug emoji. What I did listen to this year was all great though. Problem Daughter, Western Settings, The Coathangers, Civil War Rust, Squarecrow, PUP, and Blood People all released great new music this year. Maybe someday I’ll hop on that Spotify train, but until then, eh. So, in lieu of a top ten best albums or whatever and since it seems like so many people had a really tuff with to F’s 2019, I’m hitting you with a top ten things that didn’t suck in 2019 (for me):

This one started with a tragedy. Earlier this year, on a real rainy day, I was rear-ended at red light in my 2002 Toyota 4Runner. After dealing with the stupid fucking insurance agents for what seemed like forever, I walked away with a totaled car and a couple thousand dollar check. So I took that money and put it down on a “new” 2006 Toyota 4Runner. I love my new car, but I do not love having another five years of payments when I was a few months away from having the old one payed off. Whatever, you take the bad with the good I guess.

Yeah dude. This year I elevated my poop game and added not only a Squatty Potty to the throne, but a fucking bidet. Fuck only using toilet paper. Fuck the baby wipes. Squirt water right up your butthole; it is the absolute best. I heard someone once say, “If you spilled peanut butter all over the place, you wouldn’t clean it up with only a dry paper towel would you?” Be the best you, take the best poo™.

We had been in Chicago for two years when I made the appointment at a local tattoo shop for a (and I quote) “Abraham Lincoln riding the bean, wearing an Alkaline Trio shirt, holding the Chicago flag and chugging from a bottle of Malort” tattoo. I sent the artist my concept art of said tattoo and when I went in to get it done, he said he tried to improve it but couldn’t. All I wanted was the most cliché ridiculous Chicago tattoo and I think we nailed it. 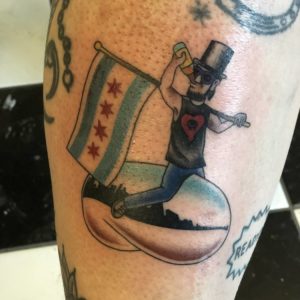 I’m a nerd. These past ten years a Marvel Cinematic Universe movie has been one of the very few movies that have been able to get my ass into an overpriced disgustingly sticky crowded theater. This year, the MCU culminated with Avengers Endgame and they fucking delivered! I haven’t been this in awe of a film in years, and Martin Scorsese can eat a big ol’ bag of dicks.

This will probably be my last Riot Fest for a while and it was easily the most fun I’ve had at one. Running around Douglas Park, drinking all the press drinks, and most importantly, we really dialed in the Bad Libs this year. Video? We did it. Not standing around awkwardly silent as an artist filled out our piece of paper? Check. Watching bands full sets and not being rushed to run off to something else? Maybe next time, pal.

David Holtz invited a group of us to hit the high seas (lake) and get drunk on a boat in the middle of Lake Michigan. The boat had everything – a slide, a giant Kraft American Single to float on, ceviche, and the elusive Costco only Tangerine White Claw. I got drunk enough to not care about the choppy waters and I think I shot gunned a Tecate in the water. At the very least, someone poured one down my gullet as I climbed back onto the boat. At any rate, this is a highly suggested activity if you find yourself in Chicago in the summer.

I worked my ass off over the last year and on November 12, 2019, all of my credit card balances were at a big ol’ fucking fat zero. I have finally reached my goal of peak Portfolio Punx. Not bad considering at my worst, I was at a little over $11,000 in debt. I would have also had my car paid off as well, but see moment #10. You can win, but not completely apparently. Now, I just have to keep it this way in 2020 and remind myself to only buy what I can afford. I feel like a true adult! Stocks! Bonds! Diversify my portfolio!

I was a little apprehensive about making this trip due to fundage (again, see above. Only spend what you’ve got, stupid!) But you only YOLO once and Kendra and I made the six hour trek to Minneapolis for the world’s largest state fair. And god damn it was that the right decision. We went to the Mall of America, saw a pregnant lady doing a naked maternity shoot at a water fall, we saw Daikaiju at Palmer’s, we mixed every flavor of White Claw into one, and most importantly, we drank frozen White Claw Red Bull Slushies, I had my first turkey leg, and I got my face painted. SMOKING? Sm… SmoKING? Ssmok…Smmmmo… SSSSSMOKIN’!

My girlfriend and I opted out of going to Fest this year to go to New Orleans during Halloween and HOLY SHIT. The food, the bars, everything about New Orleans ruled. We were there for an entire week, and it seemed daunting at first – like what are we going to do here for this long? – but it worked out perfectly. If we wanted to go back and take a nap, okay. If we wanted to turn in early, that’s fine. It was a fucking great vacation. If you’re in New Orleans the highlights were as follows: The St. Louis Cemetery #1 tour, Charbroiled oysters at Drago’s, Drinks at The Dungeon, that fucking frozen Irish Coffee at Molly’s, drinks at Mimi’s in the Marigny, and Hurricanes at that touristy place Pat O’Brian’s. Not to mention the bartender at Aunt Tiki’s gave us Whip-It’s. I fucking love New Orleans.

Two of my all-time favorite people in the entire world got married in February of this year. I know that for a fact, I had to double check it did indeed happen this year. So, not only did Lindsey and Amanda get married in a beautiful ceremony in San Marcos, California, but they also asked ME to officiate the wedding. Of course I said of course. I got my Minister license or whatever online, bought a purple suit, and wasn’t nervous one bit until literally minutes before the ceremony started and I saw exactly how many people were there. I don’t remember much of the actual ceremony, but according to everyone there I did a good job, so there’s that. So congratulations Lindsey and Amanda Cord, I hope you are very happy for a very long time.

I hope 2020 is a huge improvement for all my friends and anyone who had a not so great time in 2019. Maybe 2020 will be the year I get burned out on being burned out by music. We’ll see. As long as I don’t have to listen to that stupid fucking new Beach Slang album, I think I’ll be good. The Deadbeat Bang of Heartbeat City? At what point do you realize you are just becoming a shitty parody of yourself? Never? Ok then.

P.S. The first time they showed Baby Yoda on The Mandolorian I screamed at my TV, “FUCK YOU YOU HAVE NO BUSINESS BEING THAT CUTE.” So insert BY in here at your leisure.

P.P.S. As of this moment, I have been gifted a Spotify premium account by my lovely girlfriend I have been using for about a week so far, and I’ve come to the following conclusion: Billie Eilis’s album, When We All Fall Asleep Where Do We Go,  is the punkest most interesting album to come out this year. End Transmission.