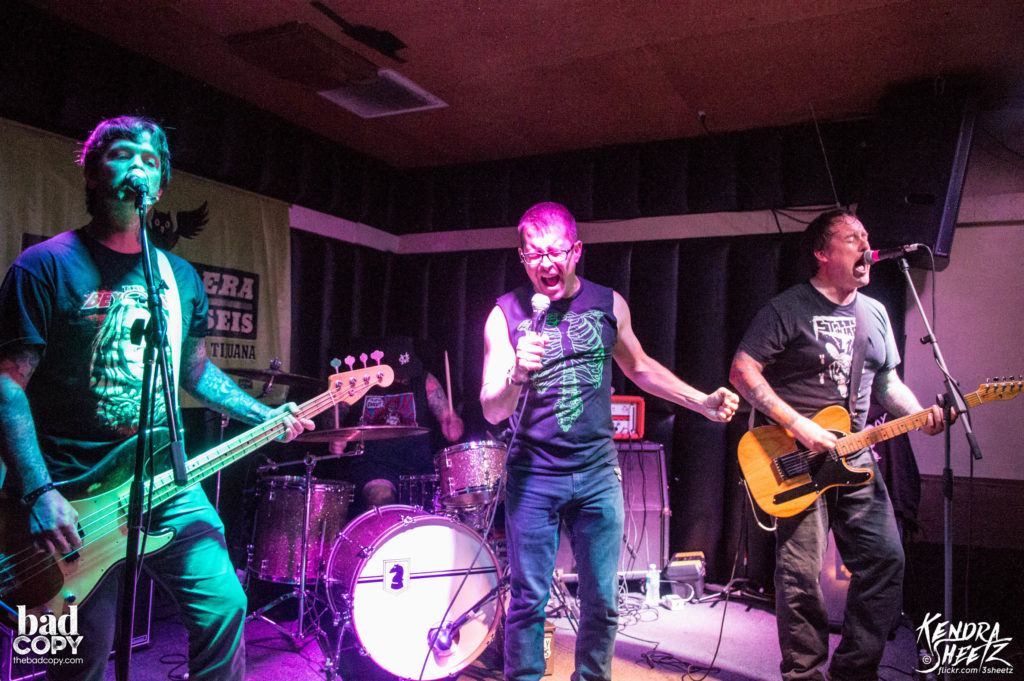 It was about 10PM and Jan Drees of The Shell Corporation and I were already a few drinks in when we decided to finally sit down and do this interview. We had been trying to get together for maybe four months before we were able to set a date. And here we were at this bar in the Inner Sunset of San Francisco. I could barely hear anything Jan was saying due to some game related ruckus going on at a table located in the middle of the bar. After futzing with the placement of my recording device (AKA my phone), we both looked over at the noise erupting from the table.

What’s going on over there?

(Jan looks over, as he has a better view of what is going on)

Oh, there’s money on the table… ah, DICE. So I guess we are talking about my stupid band, The Shell Corporation.

Well, I am contractually obligated to say that we released a record… that eventually came out on La Escalera Records. The official release date I believe was March 3rd (2018). The record is available at laescaleradistro.com and the t-shirts and shit are also available through us, if you wanted schwag from The Shell Corporation, which (chuckles)… cool. Anyway… cool story bro.

Did you actually listen to the record? Is there anything specific you wanted to know about the record?

Oh yeah I did. It’s fucking fantastic. Our very own Kevin Rettie wrote one of the best reviews of your record. I think one of the best record reviews I’ve ever read; I don’t think anyone could top that. I almost feel ridiculous even trying to say something else about it.

Ah, well that’s my SECOND favorite Kevin Rettie review. My favorite is the At the Drive In review he did. If you haven’t read it, go read it. I don’t wanna spoil it, but it belongs in The Onion. It’s one of the finest record reviews ever written. Anyway thank you Kevin for such a good review of our record. We really appreciate it.

I guess you could say I was a lot angrier when we wrote it. There were a lot of things going on in my personal life at the exact same time Trump was getting inaugurated, so it was a perfect storm of me being angry with the world. I got a couple good songs out of it; that’s more than you can expect.

(Lots of yelling happens from the table next to us)

Ohhhh… they are playing Midnight. Do you know how much money I’ve lost playing that stupid game?

Why is it called “Midnight”?

I see, okay.  I’m putting this in the interview.

Sure. Well now you know. Dice gambling games in bars after hours. Except this isn’t really after hours; we are right in the thick of it. By the way Jen is fucking wasted. She’s had… two beers? She’s shredded right now.

It was a beer and like a tall can.

Whatever, that’s a lot for me. It’s a tall-ish can.

Yeah, a tall-ER can. (laughs) I’ll hold your hair if you have to vomit on the way out.

You are playing Fest, right?

Yeah, we are playing Sunday and maybe Puerto Rico. It’s uh… look it up on the website. That’s what I’m gonna do. I’m gonna go on Google and find out where my band is playing. But we’ll be there! We’ll be there hanging out and playing a show and selling some t-shirts and drinking some Pabst Blue Ribbon until I have two of them and decide that I don’t like that anymore.

Oh yeah, Pabst. That is how that goes.

I’ll have like two tall cans and be all like, “Ohhhhh alright. Yep, I grew out of this about ten years ago.”

Yeah, it’s gross and it makes me feel bad and I get hot flashes when I drink that shit.

I’m going to that taco place next to Loosey’s, drink some water, regroup then either not drink or switch to whiskey. Not drinking is probably a better idea but I don’t have the willpower for that.

What is the Shell Corp plan for Puerto Rico?

We are going to play two shows, probably with our friends Decentes (formerly D-Cent Jerks). They are going to set that up for us. Unfortunately it’s going to be very quick. We are gonna fly in, play the shows, fly to Orlando, play a show, then fly home. It’s a beautiful place, a really cool place to play, and it’s a pretty good time and we get to see friends we rarely get to see.

Well, I’m out of questions and I didn’t have many to begin with.