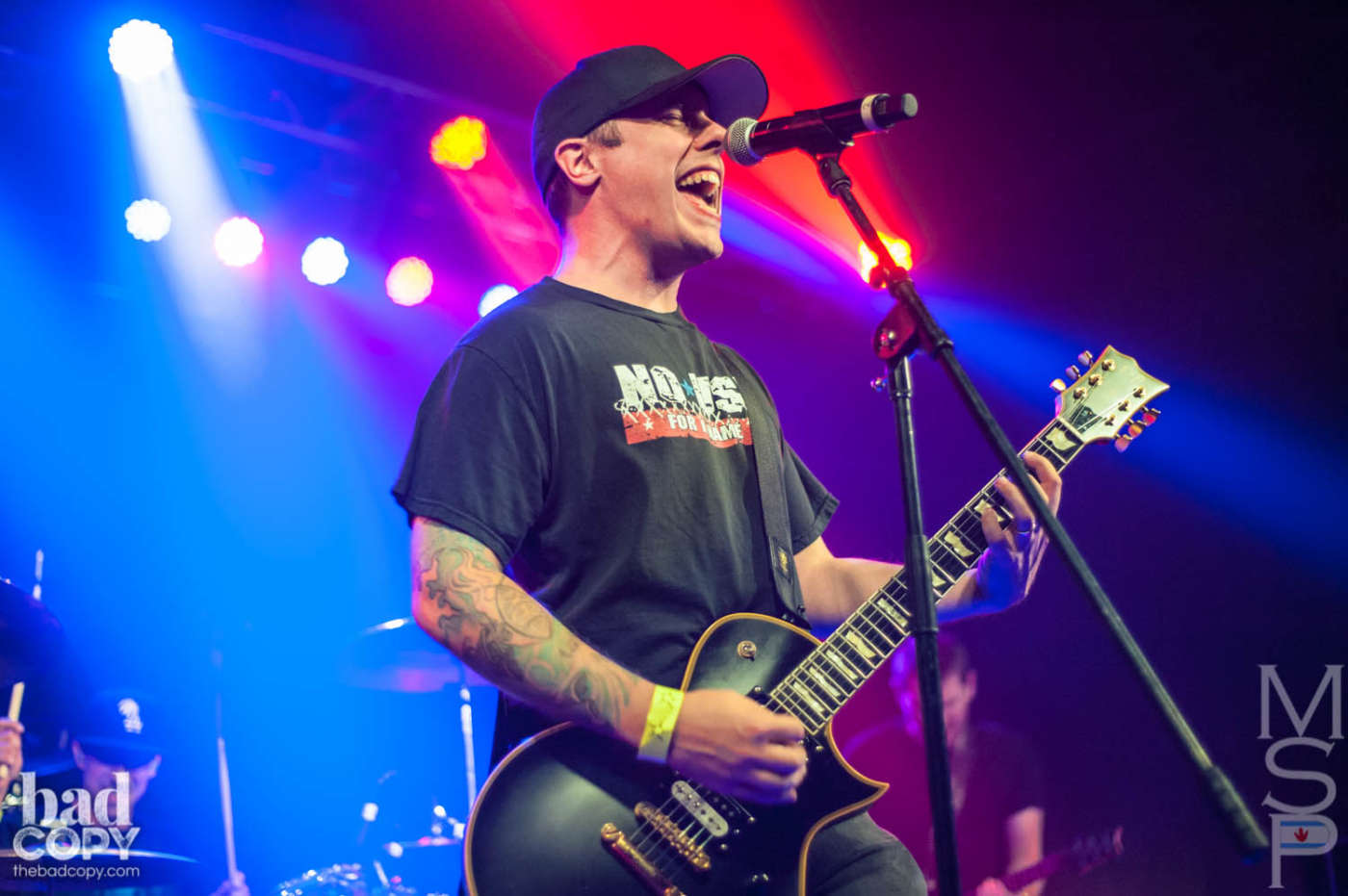 Much the Same has been kicking around for a number of years, but a sudden departure from the scene left a gaping hole in the hearts of fans. After playing their farewell show in 2011 followed by a handful of shows in between, it seems like the band is ready to get back into the swing of things. Things are a little different this time around for the band, but the thrill of playing together is still there.

The band just played a show with Goldfinger. Afterwards, I was able to steal away lead singer Chris McGrath as he got the house ready for his son’s birthday party to talk about the joys of playing together again with old friends and how much cancer sucks, especially when it hits so close to home.

Evening! If you would like to introduce yourself, then we can get this interview started.

I’m Chris, sometimes known as Gunner. I sing, play mediocre guitar, and generally annoy the rest of the guys in Much The Same.

Nice. How long has that been going on?

I started the band back in 1999 with a whole different group of guys. Dan and Frank joined around 2002 and Jevin came on in about 2004. We broke up in 2007 and then got back together in 2015. But I did not entirely stop annoying them during those eight years off…

Did you all remain close after you broke up?

Well, we did not break up under the best of terms, so it took a few years for us to start communicating much again. We had what was supposed to be our final show in 2011, and that was probably the first time we were really back in good contact again. Dan and Frank have been best friends the entire time though.

What got you all talking again?

I think we’d just gotten over our sour grapes and wanted to give Chicago the farewell show we never had (I quit in Europe).

And then over the following years we bounced around the idea to start writing music again. Dan and Frank had started a new band that didn’t end up working out. So we wrote one song together, but for whatever reason the timing just wasn’t right yet at that point.

Finally around 2014-2015 the other three guys started working on new stuff together again, but I wasn’t really involved at that point. By the time I felt I was ready to commit, our drummer Jevin, was having a baby and it was not a great time for him to try to work together long distance. We ended up recruiting our friend Mike and played for a couple years that way until bringing Jevin back for good.

That’s so exciting to hear. I was such a fan of Survive back in the day, it’s hard to believe that was eleven years ago. Last week was my first time seeing you all and the songs sounded great. How does it feel to be playing them again?

It’s always a blast, Survive is the album where, even though I didn’t write nearly as much of it as I did the first record, I really felt like we had found our sound and I honestly never got tired of those songs. Maybe if we’d been playing them for ten years straight I’d feel differently… but I don’t think so. And I will say, it feels great to play for new audiences and have them respond as well as people did last week.

That album definitely felt like a step up. Very solid growth of the bands sound. Has the process changed for writing MTS songs since the last time you all wrote?

It has changed a bit, but only from necessity. Survive was an extremely collaborative effort, I think all four of us wrote lyrics and music, but usually not for the same song. People don’t expect drummers to be good songwriters but some of my favorite stuff was at least partially written by Jevin. We all just brought in whatever we felt was right for each song, and somehow we all clicked really well and played off each other.

This time around, Dan is writing a lot of both lyrics and music, definitely the bulk of everything we’re playing. Frank has continued to develop as a songwriter in his other band, Burn Rebuild, but that also means that a lot of his creative energy has gone there. So Dan picked up some of that slack and honestly has blown us all away. He was the one who wrote the fewest lyrics in the past, but he’s knocking it out of the park now.

The other big difference is that Jevin lives in California, and the rest of us have moved to very opposite ends of Chicagoland, not to mention we have careers and families now, so a lot of the collaborating happens remotely through demos and texts. But when we manage to get in a room together, everything still just clicks like it always did, which is extremely satisfying.

That’s so cool. I hear that from a lot of bands that end up taking some time apart and the output ends up being a real treat.

You all are heading down to South America soon. I tried to read your interview with that Brazilian outlet, but it was all in Portuguese. *laughs* Will this be your first time playing in South America?

*laughs* Yep! I definitely never thought it would happen, even with about 50 million people demanding we come to Brazil. *laughs* Maybe it was more like 50 people, but it felt like a lot.

I don’t think people realize how expensive it is to tour other countries, or how poor bands like ours actually are. So it’s pretty amazing that we get to do it at all, and even more so that we’re part of such an amazing lineup.

Oh I know. Just visiting another country is so much work, I can’t imagine adding work permits and shipping instruments on top of that. How many shows and who will you be playing with?

We’ve got nine shows in six countries. Face To Face is the headliner, and one of our biggest influences. Ignite, we fell in love with as we were writing Survive as well, and their singer Zoli contributed some backup vocals on one song. And then The Fullblast and The Decline are bands we really like a lot, too, so these are going to be great shows.

Holy cow. That’s a killer lineup. How does it feel being back on stage? Have you played other shows since 2011 before the Goldfinger show?

Yeah, we’ve had a bunch of good opportunities. We’ve played with 88 Fingers Louie, Sick Of It All, Ignite, A Wilhelm Scream, Smoking Popes, Masked Intruder, Brendan Kelly, and Mest, to name a few. We also got to play Groezrock in Belgium and saw what I believe will be the final performance of No Use (for a Name) with a bunch of legends singing with the band. It’s kind of crazy, because we’re starting to do things now that we couldn’t manage back in the day, even though we didn’t really play at all in between.

It seems that in our years off more people have gotten a hold of our music and want to see us play. But we’re not milking it; that’s why we’re writing a new album. We never planned for this to be a nostalgia thing. I love being back onstage, though it is different now for me, personally. My identity is no longer tied up in being the singer of a punk band, so I can enjoy it a bit more freely than I could in my 20’s. I don’t feel like my world is collapsing if we have a bad show or get a bad review. On the other hand, age has some drawbacks physically, so I’ve had to start running just to be able to stay in good enough shape to get through a set. Without exercise my old body gets tired way too fast now!

I know how you feel. I just covered Riot Fest last weekend and my body is still sore. Are there any bands that you hope get back together like you all did so you can play a show with them?

The Swellers, for sure. We just barely missed each other. I got to sing a song with them at their last show in Chicago and it was a blast. I love those guys and their music, so I really hope they decide to come back again someday.

They have been friends of ours for a long time. We met them when they were still in high school and already a really good band. But by the time they started doing bigger things we’d broken up. I still talk to Nick and Jono sporadically; they’re great guys.

I was just listening to their last record recently. It’s so good. I’m with you. I hope they come back and you get to play a show with them. I saw your post for the show to raise money for Dan’s treatment. Did you want to say a few words about that?

Our guitar player was recently diagnosed with testicular cancer. It was not such a big deal at first because it’s easy to treat. But it turns out that it has spread quite a bit so he’s got to go through chemo, which he started a couple weeks ago and will be doing for two to three months probably. He’s really fortunate to have gotten a job with insurance because otherwise he would have been screwed. If I wasn’t already appalled at the state of our health care system, I am now, thinking of what could have happened if he had not gotten that job.

At this point we’re just supporting him the best we can, and he’s being a trooper about it. A lot of old friends and plenty of strangers have donated to help him cover his expenses. We’ve just announced that there will be a benefit show in December featuring Counterpunch, Ryan’s Hope, Lights Over Bridgeport, Amuse, and Burn Rebuild. Even with insurance, it’s a very expensive situation and he won’t be able to work at his brand new job for a few months. So as much as Dan really hates to accept charity, he is really appreciative of how many people want to help. He’s got two young kids to take care of as well so there’s a lot at stake there.

What an amazing response a terrible situation.

I know it’s getting late and you’ve got to be going, so thank you so much for taking time tonight to talk to me.