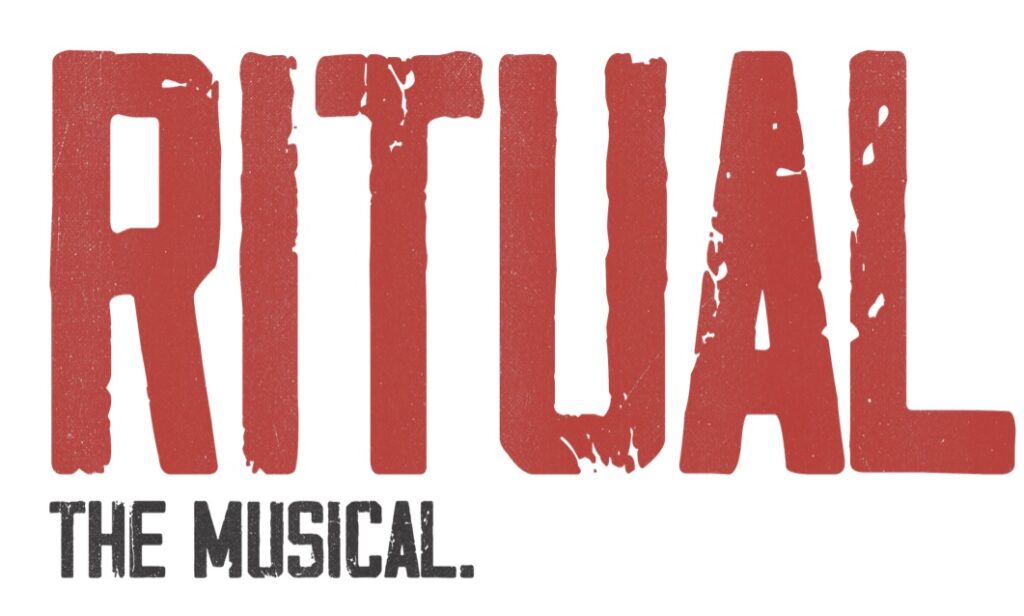 The COVID-19 Pandemic has messed us all up in different ways. And the great quarantine of 2020 brought us so many different feelings, worries, episodes of terrible binge-worthy TV. While some of us used to the time to Netflix and Panic Spiral, others dove deep into creative undertakings.

You may know Chicagoland’s Terry Morrow from The Reaganomics or maybe from his early aughts project, Ryan’s Hope. During the 2020 lockdown, Terry took his musical experiences and made, well, a musical. We sat down with Terry to talk about what gave him the idea and drive to write his musical- entitled RITUAL, how it grew to something much more than ever expected, and what’s in store for the future!

For starters, can you introduce yourself and give a little background about yourself – how you got into music, your musical endeavors, and how you ended up writing a musical? 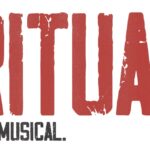 My name is Terry Morrow and I’m a Choir Director and Music Teacher on the South Side of Chicago. I also played in a Punk band called Ryan’s Hope in the early 2000’s and currently play in Red Scare Punk band The Reaganomics.

I got into music basically as a child when my parents would blast everything from Peter Gabriel and Pink Floyd to Musicals like Fiddler on the Roof and Jesus Christ Superstar. Aside from the Punk rock bands I’ve played in, I’ve always loved to compose in a variety of genres. I have a joke metal band called Rhino Fight with my friend Eddie, for example. But growing up loving musicals, it’s always been in the back of my mind to someday put one together.

I ended up writing “RITUAL” because I had happened to re-read one of my favorite short stories “The Lottery” by Shirley Jackson when COVID first hit. We were on a hard lockdown, and for whatever reason, I read “The Lottery” again, and this time I started imagining what type of sounds would accompany these characters and themes. I was sitting in my front yard, and things just started coming to me! I scribbled in a notebook and  recorded voice memos on my phone and eventually brought them to my recording set up and it seemed to snowball from there!

What made you choose “The Lottery” as your source material?

I chose “The Lottery” because I’ve always been drawn to horror and suspense in stories. It felt like a fun challenge to take this gravely dark and macabre plot and see if there was any way to make it work as a show that wouldn’t leave an audience utterly broken.

We had just spent much of the previous Summer protesting the death of George Floyd and I was putting a lot of energy into decolonizing the curriculum at my teaching job with my teacher friends. Activism made me think differently about the villagers in the story, and their blind allegiance to the status quo. The continued privilege and dominance of the white male in our society and the systemic issues that plague us as a result tied directly for me to the villagers and the leaders of the town in the story, and I composed with all these feelings and frustrations in mind. I wanted to expose the absurdity and danger of some traditions, and the sometimes high cost of questioning authority.

You mentioned that you started writing RITUAL during quarantine, which is a much more productive way of spending time than watching Love is Blind and Tiger King, like I did.

When did lightning strike? When did you decide that you wanted to write something so substantial, let alone a musical?

In the late Summer of 2021, I sent a piano demo of “Nowheretown” to Erica Marfo, a former student of mine who ended up playing Tessie in RITUAL. With my 38-year-old voice singing “Nowheretown” in a lower octave, barely awake, it wasn’t much to listen to. Erica sent it back with her voice and that’s when lightning struck. Her performance validated the melody, and the song. It suddenly sounded legit and gave me a big lift! At that moment, I created maps for all the main characters and conducted a sort of sonic experiment. “What do these people sound like?” That’s when the Villager chant was written, and Mr. Summer’s silly ego-trip song, and Nancy’s sweet pre-teen angst ballad too! I made it my mission to inject levity into the story via fantasy and character development.

What, if any, are the differences in writing a Punk song or album and writing a song for a musical?

It’s funny you ask, because “Nowheretown” from RITUAL is actually taken from an old unused demo for The Reaganomics called “He’s a Hipster.”

When I write a Punk song, I’m basically trying to make it aggressive, honest, and include some humor. I like to take typical chord progressions ala Ramones and just sort of bullshit gibberish words over it until a melody sticks, then I go back and insert syllables that convey the message I want to share. Timely and important messages like “I’m getting old but I’m still Punk” and “One time I saw Iron Maiden with my friends.” Lol. We don’t deep dive on the lyrical front. Add a solo section or riff-o-rama section and call it a day. Lots of fun, and never a lengthy process. If I’m thinking too much about my stupid Punk song, it’s time to drop it and move on.

Writing for the musical requires me to tap into another part of me, and it’s such a blast and a challenge to go there. It’s wholly selfish. As much as I truly love and cherish working with my friends in The Reaganomics and building songs together, it’s pretty cool to call each and every shot too. I think about how Les Mis makes me feel, the importance of fluidity, and how the narrative should be delivered to someone who may have  no idea what to expect, or maybe hates musicals. I imagine being in the audience and compare it to how I felt the first time I saw Hamilton. It’s a collective, continual sung-through work. Over 20 songs, but so meticulously interwoven and intentionally timed.

Not only did you write the musical, you actually cast and performed it! Tell us a little about how this process came to be and how the showings were received.

The making of the demo was nuts because COVID was hitting everyone, and we couldn’t go anywhere. I was remote teaching, and my kids were home remote learning, and my wife was also working from home, so our Wi-Fi was getting a workout. I tracked all the vocals and instruments myself so that I could be as intentional as possible with harmonies in the ensemble and the performative nuance of each lead role.

Over the years of teaching and performing, I have made some brilliant and lovely friends, and in time, via Google Drive, I had friends around the world contribute their voices so that I could get away from hearing myself in every song. It was driving me insane. Hearing other people singing my songs was again a huge lift and the fact that these people did it for me out of kindness made it so much better. No one had to give this the time of day, let alone spend their precious free time recording themselves and sharing.

Once the whole demo was recorded, I made some offers to some of the contributors and eventually we were fully cast. On the music side, luckily my bandmates are my best friends and the best musicians I’ve ever known, so they inherited the task of learning the show and playing it! It gave us something fun and different to focus on, and we made some tech upgrades since we did the show to a click and had backing tracks, etc. We learned a lot and laughed a lot.

Fast forward to vocal rehearsals every Sunday, and band rehearsals every Saturday. Eventually, we crammed everyone, masked up, and made this show work in the basement. Made a few DIY style props with help from family and friends, and my wife Amy gave it a final layer of gloss by staging it and directing all the logistics. We premiered at Reggie’s in Chicago in February 2022 with two back-to-back sold out shows. It was very well received. One of the most humbling moments of my life was watching the cast bow and seeing so many loved ones standing and cheering them on. Dear friends I haven’t seen in a long time came out, former and current colleagues and students, and lots of family made it out for the event. It was mind-blowing!

Then, at the school where I teach, my students heard some of the songs and really seemed to dig it, so for our spring musical, we launched the High School version of RITUAL and did this whole cross-curricular study with our kids and all the 9th graders who read “The Lottery” in English class. That was a whole other side to this thing that I didn’t expect at all.

What were some of the difficulties that you came across in the writing, the casting, and the performing of RITUAL?

One issue I had while writing was mental fatigue. It almost felt as if the music was coming out faster than I could keep up with, even though I had so much free time due to quarantine! I would be at the store and have to record a new voice memo on my phone because I’d connect some dots that made everything better. Or I’d be walking around Target and have a fresh bunch of vocal tracks sent to me by someone who would eventually be cast in the show, so I’d get home, import their work and it was just a 24 hour mental engagement for me. I’d type notes in my phone before falling asleep, and then wake up an review them. I felt electricity in my brain all day, and had trouble sleeping at times, because my belief in the show grew the more I was hearing back from friends and participants.

Hearing those closest to me grow more excited and supportive made everything even better, but when I’m excited and invested in something, I’m obsessive. I have trouble walking away when things are flowing. No issues with casting, that was surprisingly easy, again because everyone in the show is an amazing human being who happens to be mega talented too.

Do you have plans for any future performances of RITUAL?

We are hosting two more shows this month that we’re really pumped for! A FREE acoustic matinee at Music Coffee Studio in Chicago, and then we’re playing the main stage at Reggie’s for a full blast run. Hoping that someone takes interest in this thing and we find a way to breathe a longer life into it because it’s been an absolute blast.

Thank so much for talking with me about this and for giving the show your attention!

Check out the flyers for the free all ages matinee show on May 21st below: 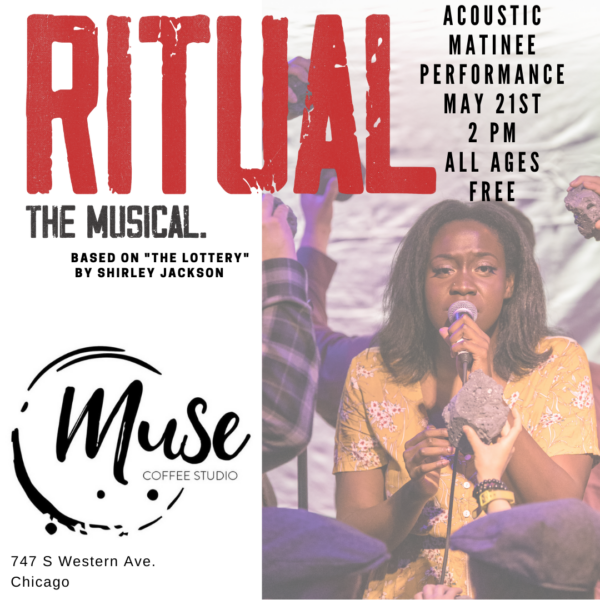 And the flyer for the all ages show at Reggies in Chicago on May 28th!