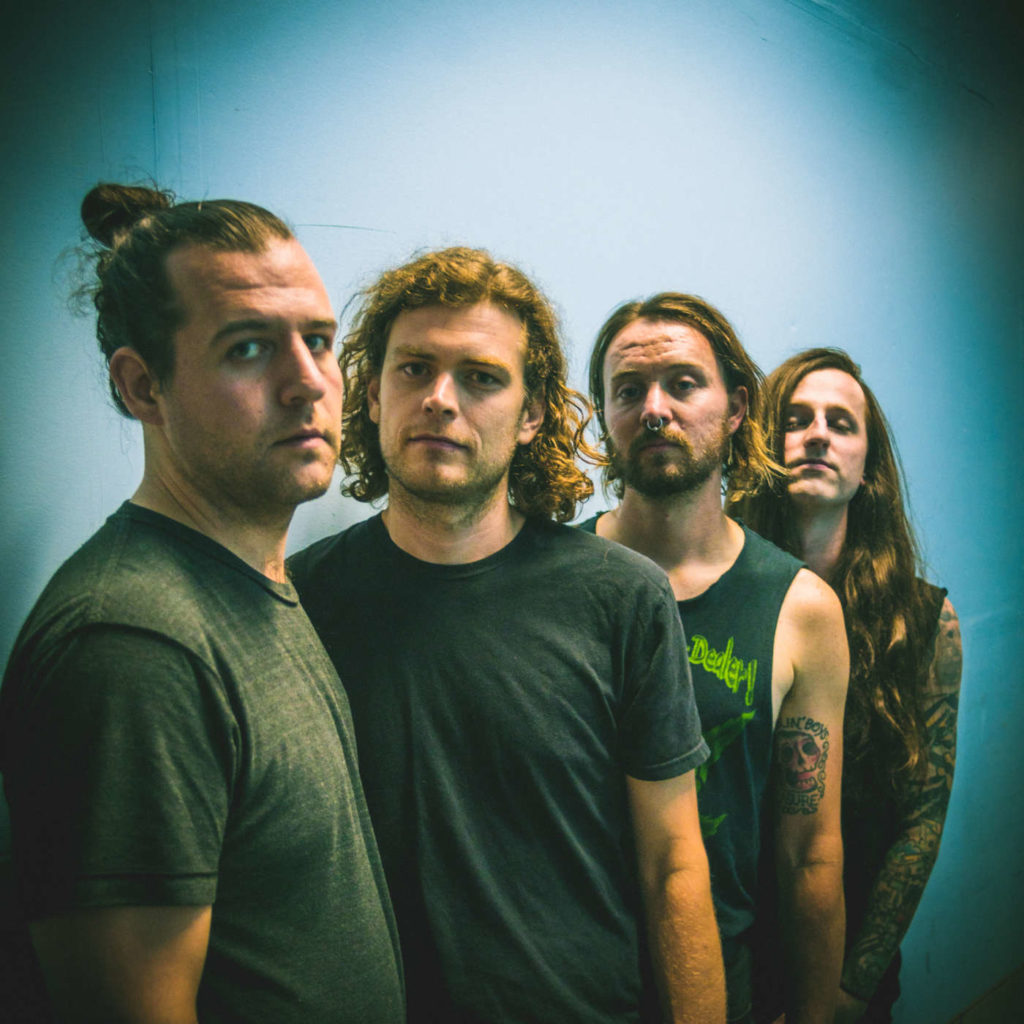 I got the chance to exchange emails with one of Chicago’s very best and one of my favorite active bands, Typesetter, before they head to FEST later this month.

The band will be released a new record called Nothing Blues on October 26th via 6131 Records. You can purchase it online or in person while they’re on tour with Red City Radio and Kali Masi this Fall. We’ve included those dates below!

Hello, friend! Please introduce yourself to the Bad Copy readers.

First of all, congratulations on signing with 6131 Records for your new record, Nothing Blues! What has been your experience working with the label so far? What are some of your favorite records they’ve put out in the past?

When we were reaching to labels about this record, I was especially stoked that 6131 showed interest. They don’t put out bad records. Alex and I’s old hardcore band – Cave Bear – played with Focused Minds, who was on 6131 when they were more hardcore-focused.

Typesetter played with this band Teen Death a few years ago, and I just thought they were so cool. They were on 6131 as the label was branching out. They’ve released some heavy hitters in the last few years – Julien Baker’s Sprained Ankle, Culture Abuse’s Peach – that have been really cool and diverse. Suburban Living’s Almost Paradise is incredible spacey indie pop. Kindling’s Hush is fantastic shoegaze. Well Wisher’s This is Fine is alt rock gold. Very happy to be a part of this label.

It’s my understanding that there was a lineup change between the last record and this one. Was it challenging bringing someone new into an already established chemistry or is it more refreshing to gain a new perspective?

We toured hard for a year after we released Wild’s End in late 2014. Stephen Waller was our drummer at the time; he was incredible and we did some great stuff together. We were working on new material when he decided to leave the band in January 2016. Alex, Kyle and I wanted to bang out another record ASAP and keep touring hard.

We met Matt and he said, “I wanna tour. Tell me which songs to learn.” He showed up to rehearsal knowing all the songs. We were drilling old material with him and writing new stuff simultaneously. “Monogamy II,” “Real Conversations with Imaginary Friends,” and “Regardless” were written in this time, early 2016.

Of course it’s challenging and takes time to dial in the vibe with new players, but we all have the same work ethic. We practice as much as possible. We felt like we had to keep moving forward, so we tracked an EP and released it in collaboration with Soothsayer Hot Sauce.

We also needed to expand our sound, so we brought in Sarah Bogosh to play with us as well. She played keys and trumpet on Nothing Blues. She’s not playing with us anymore; now we have Natalie Krueger from Minneapolis’ Sleep Debt playing guitar and keys. Stephen’s now in a rad psych band called Casual Hex, and Sarah and I are currently recording her solo project’s debut EP.

How has the addition of new member(s) helped expand your sound? What new instrumentation are you utilizing?

Keys, some brass, three guitars at a time. We play guitar music obviously, but I really wanted to be bigger. We tracked guitars, bass and drums with Jeff Dean and then I took the songs and recorded keys, percussion, and vocals. I mixed it as well.

Matt’s very active in the production, he had a lot of ideas for percussion arrangements. “Technicolor” has two drum kits that start and finish each other’s fills. When we were tracking, he was like, “Alright, keep that take and start it from the top again.” Totally nailed each “half” of the drums back to back. That song has so many tracks.

What do you hope your listeners take from the record?

I only recently began addressing the mental health issues in my life, which are at times pretty critical. How often I’ve been just unable to function or complete basic tasks or abused drugs and alcohol to cope. Like many people, I internalized a “suck it up” mentally, and that can be fatal. I am so happy that the national conversation about mental health is changing and people can be more open and honest about it. We never tried to have a “theme” for this record, that’s organically what came out and I hope it contributes to that conversation.

What do you have in store for the big bad album release show?

So stoked to be sharing it with our homies in Kali Masi and Bong Mountain. Kali Masi’s one of my favorite bands. Bong Mountain are the coolest people ever, and Adam basically saved our lives once. I did sound for Fall Classic once at Double Door, where I worked for years until it closed. They’re groovy and their guitarist rips, and we’ve never played with them.

I love playing with different bands, I love diverse bills, and I love it when shows don’t stick to one genre. Each of these bands has their own thing.

The Lydia Loveless collaboration on your single, “Technicolor,” is really beautiful. What was it like working with them?

It’s an honor to have Lydia on our record. We had talked to her about doing a track and intuitively knew it should be “Technicolor.” Scotty Sandwich from Death to False Hope Records recorded it in Durham, where they live. We didn’t really give her any direction, just asked her to do what she thought would be cool. I had no idea what she was going to do, and her track added a totally unexpected thing to the song.

It’s always so interesting when other artists interpret your thing. Typesetter is very democratic which is why it takes us a long time to get shit done, ha. But I’ll give the band a demo and someone will say “actually the song goes like this” and add a totally new dimension to it, something that was entirely invisible to me before.

I always had a good feeling about that song, but everyone that touched it – Kyle, Alex, Matt, Sarah, my wife Meg has a “ooh ooh” vocal, and then Lydia – each person adds a dimension. Music is cool that way.

What are you most looking forward to about playing FEST? I’ve never been, but I hear it’s basically a big ole gushy punk rock family reunion weekend. Where and when can FESTers see you play this year?

The best thing about Fest – well, there are a lot of best things about Fest – is that you can walk into any venue at any time and a rad band is playing. Cursive, Mock Orange, Metz, and Piebald are my top bands to see.
We’re playing at The Wooly at 9:20 on Sunday with Mock Orange, City Mouse, Look Mexico, and Mobina Galore.

Please, tell us about your fall tour with Red City Radio and Kali Masi. Where are you going? Any place(s) new to you?

We’ll be playing Boise, Sacramento, Salt Lake City, and Corpus Christi for the first time. I want to play in every city.

Playing with Kali Masi is wonderful because they are both friends and an inspiration. The guys in Red City Radio have always treated us so warmly. We played our second and third shows with them and now Jo Jo, their bassist, is our booking agent. And those dudes can sing! Every song has massive harmonies. Wish I could sing like that.

How did your recent run of shows with Against Me! and Speedy Ortiz go? How did you link up with Against Me!? I know you’ve played with them quite a bit in the past as well. I imagine Laura is as wonderful in person as she is on stage and in her book.

It’s always insane to play with one of your favorite bands, and we’ve all been listening to Against Me! for years. Laura DM’d me to ask if we’d do it. We met years ago when she played at Double Door. Alex and their wife Mikaela occasionally babysit Laura’s kid.

veryone in Against Me! is great. In my opinion, this lineup – Laura, James, Andrew and Atom – is their strongest ever.  Laura is one of the most dedicated people I’ve ever seen. She puts 110% into every show; she is truly a rock star. Speedy is wonderful. That’s pretty much my ideal tour – three bands that are all distinct but still make sense together. I’d do that tour forever.

Did you feel like rockstars playing Riot Fest this year? Did you catch any rad sets that stuck out to you or made you cry?

Fun Fact: I do audio at Riot Fest. So I got there at 8AM on Friday, loaded in and sound checked Weezer, ran over to the other stage, ripped a gig, and went back to work.

Riot Fest has a special place in my heart – one of my first gigs doing sound professionally was working Riot Fest back when it was at Congress Theater. I was a patch tech and the monitor engineer let me mix monitors for Leftover Crack and Strike Anywhere. He was probably like “thank god I get a smoke break,” but I was in heaven. Descendents headlined.

Punk fans can be a fickle bunch, so can people who don’t understand punk or alternative music and art, so Riot Fest has a bunch of haters. There is no other festival in the country that has programming as consistently awesome as Riot Fest. Name one other event that’s had Nine Inch Nails and De La Soul and fucking Jawbreaker in the same weekend. You can’t. We’re so lucky to have it in Chicago. So yea when we got the email asking us to play, it felt really cool. We’re not used to playing in the sun, but I want to be able to crush it under any circumstance, and I want to play all the time. So of course we jumped right in.

My friend Matt wanted me to ask you what your favorite method of letterpress printing is, but I don’t even really know what that means. So feel free to answer it if you have one, but also just how or why did you settle on the name Typesetter? Is there a symbolic meaning to you that you’re willing to share?

Haha, I unfortunately am not well versed in the actual art of typesetting. My grandma instilled in me a local pride when I was growing up in St. Louis, Missouri.

The author Mark Twain was from Missouri. I’ve done a bunch of nerdy things like visited his boyhood home in Joplin, MO, and ridden on barges on the Mississippi. His first job was as a typesetter. He was an outspoken critic and satirist, an abolitionist, a radical leftist but simultaneously an everyman.

Typesetting is a technical skill in communications, so is playing music. It also sounds cool and doesn’t really have any genre connotations; a band called Typesetter could be anything.

Thank you for taking the time to chat with me. Take care, I’m rooting for you always.