Riot Fest is hosting a round of community initiatives benefiting the Douglass Park Community in partnership with the Riot Fest Foundation. This Sunday, July 11th, organizers will be at the corner of Ogden and Sacramento from 10:30AM – 2:30PM overseeing the following initiatives:

1. Community Tickets
Once again, Riot Fest is inviting Douglass Park neighbors to come out and enjoy this year’s festivities free of charge. Douglass Park residents who live within a certain radius must register ahead of time for complimentary tickets—read the full details on their website – and stop by this Sunday to get signed up!

3. Volunteer Park Cleanup
Signups are full for a second volunteer-powered park cleanup of the year. There will be mulching of trees, picking up trash, pulling weeds, planting flowers, and more—selected volunteers will receive Riot Fest tickets in exchange for their efforts.

Can’t make it out this weekend? A Safe Haven Foundation is keeping its virtual 5K going with the 2nd Annual Global Virtual Run/Walk to End Homelessness. Everyone who signs up for the race is entered to win a pair of Riot Fest tickets! The virtual run period is July 17–25, so sign up now (and be sure to join the Riot Fest Foundation team). 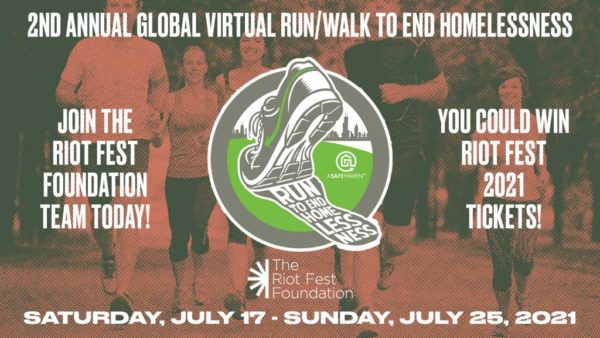 This year’s Riot Fest will run from Friday, September 17th through Sunday, September 19th in Douglass Park in Chicago and is SOLD OUT. They’ve also announced a handful of Late Night Shows which take place nightly after each night of the festival!