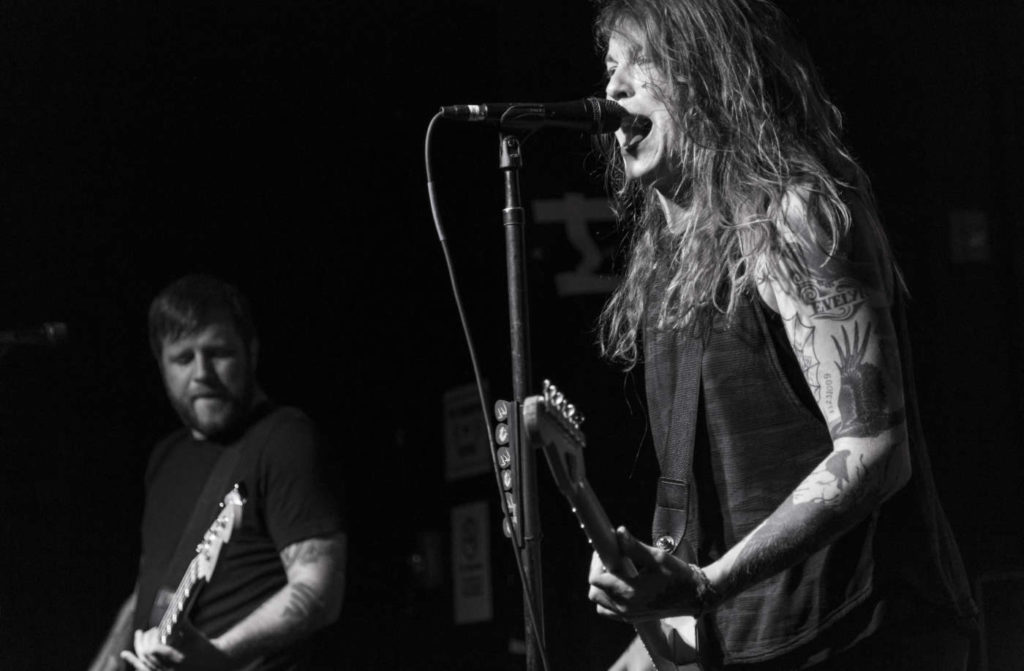 When Laura Jane Grace sang “there is a joy in every possibility,” oh man, did I ever feel that. And that’s exactly what I felt when Anthony and I met Against Me!’s newly returned bassist Andrew Seward backstage at Lansing’s inaugural Three Stacks Festival in June and he told us that his band would be returning to Grand Rapids in exactly a month. Our brains exploded at the thought of the possibility of seeing them at our home venue, The Pyramid Scheme, with a relatively compact 420 capacity. We snagged some tickets the next morning and it sold out not long after. Joining them on the bill would be Massachusetts indie-rockers, Speedy Ortiz, and Chicago punks, Typesetter. Talk about icing on the cake. Pure joy.

My friends and I literally counted down the days until Sunday, July 29th. When it arrived, it didn’t even seem real. Have you ever been so anxiously anticipating something that when it’s finally time you don’t really even know what to do with yourself? It was one of those days for me, like “how am I supposed to do regular life when I know I’m going to be going buck wild with my friends watching our favorite band tonight?” Nevertheless, I meandered through my work day and caught an early wheelchair-accessible cab ride to the venue. Even though venue doors didn’t technically open until 7, I got to the mostly empty bar around 5:30 because again, what the hell else was I going to do on Against Me! day?

AJ got there shortly after me for similar reasons which was super rad because we don’t get to hang out nearly as much as I’d like us to. Alkaline Trio had just released their new single “Blackbird” a couple of days prior so we both were pretty excited over that and the prospect of their new album Is This Thing Cursed? It was perfect summer weather outside, warm, but not roasting. After chilling (literally, the air conditioning was freezing) at the bar for a few, we stepped out to enjoy the weather, to wait for more people to show up, and to check out Against Me!’s vintage tour bus parked out front. Man, was it a beaut. AJ remarked how cool it is to see the band doing so well and reminisced about when they used to travel in an old broken down van. With big, cool tour buses doesn’t come “too cool for school” attitudes though as a few of the band members were hanging out inside The Pyramid Scheme playing pinball.

Kim and her daughter, Alexis, and Lindsey with her step-kiddo walked up around the same time. And not long after came Anthony and Tonia, mine and AJ’s respective dates. I had a feeling this show would turn into a big, sappy GR punk-rock family reunion and I was right. Everywhere I turned my head were buds and buds galore! I could name drop a whole page if I knew it wouldn’t get you to close this tab, so I won’t but I have to shout out my fellow crip-punk friend, Matt. It’s not common enough that I get to enjoy a show in the company of physically disabled people like me. But when it happens, it always takes it up a notch. It’s a very special, specific kind of camaraderie to look over and not only know we’re sharing a moment but also have each other’s backs like no one else can. We would have a few moments like that throughout the night. So shout out to Matt and shout out to The Pyramid Scheme for always willingly and easily accommodating us both.

After catching up with my people, some I hadn’t seen around in a while and others I see every weekend, it was time for the opener, Typesetter, to kick off the gig. They started promptly at 8:00. If you know me, you know I’m a stickler for timeliness. Yes, even at punk shows. Anyway, I was pumped to see them again after nearly a year. In the fall of 2017, I actually kind of got to open for them when they toured with Apologies, I Have None. I say “kind of” because I got to do a duet on two songs with my friend Maggie May who was actually billed as their opener. Still, it was my first time ever performing live. That night, I fell head over heels for Typesetter’s music. It was their striking tone and expert musicianship – especially for a punk band – that hooked me. But over the last year, I’ve learned a lot of their lyrics so I finally got to sing along. They’re special. During their 30 minute set, they played a solid mix of old songs (including two from my favorite release of theirs, 2016’s EP #5) and fresh material from their upcoming full-length record, which has since been announced for an October 25th release on 6131 Records. The album is called Nothing Blues and is suddenly one of my most anticipated things this year. Their set also included a brilliant cover of “Hanging On The Telephone” by The Nerves, later made famous by Blondie. Lindsey was geeking over it.

Next up was 90s-worshipping indie-rockers Speedy Ortiz. They’re one of those bands I’ve meant to get more into because they’re right up my alley, but have only jammed them here and there so far. Except for “Raising The Skate.” That track slaps. I’ve put it on a million playlists, and have honestly worn it the heck out. They played it live and it’s even better. They tore through their set like pros and had some fun banter. At two separate times, Kole and Tonia leaned over to me to say that the bass player was a past tourmate of The Lippies, Audrey from Worriers. So that was a pleasant surprise!

Finally came the moment all of us had been waiting literally months for. Against Me! took the stage with smiles painted across each of their faces and to a roaring crowd. There was a gentle surge toward the front as the band kickstarted their set with “FUCKMYLIFE666,” a perfect song to set the tone of the rest of their heartfelt performance. When I saw them at Three Stacks Festival, it was only the second or third show with bassist Andrew back in the band after a five year hiatus, so they played almost exclusively the hits from the first four records, I presume to let him get familiar with playing again and to learn the new songs. But at The Pyramid Scheme show, they ran through not just the hits, but some deep cuts from every record they’ve ever put out, including “Tonight We’re Gonna Give It 35%” from The Disco Before The Breakdown EP. There was truly something for everyone in the diverse crowd.

There were plenty of highlights from my perch. My favorite song of theirs, “I Still Love You Julie” has taken on a whole new meaning since my friend Julie passed earlier this summer, so my cheeks were definitely a little wet after that. Laura called Vertigo Music one of her all-time favorite record stores. That’s our record store! My zine, Skitchin’, is available at checkout, which means Laura Jane Grace has seen my work with her own two eyes! Watching Kordan go absolutely batshit crazy during those first few chords of “Pints Of Guinness Make You Strong” made me belly laugh. Looking out over the audience as we all sang along to “True Trans Soul Rebel” in unison with Laura, I felt utter peace wash over me. Total calm. Then the set concluded and guitarist James Bowman flicked his pick into the crowd. I saw it cascade like a tiny frisbee over everyone’s heads and then felt something light pop me in the chest. It was the pick. Now my physical memento from that magical night is sitting next to my laptop for inspiration as I write this.

But it wasn’t quite over. After chants for “one more song” and jokes about “one more set” Laura returned to the stage strapped with an acoustic guitar. She strummed into a song I admittedly didn’t recognize (deduct my punk points right the heck now). It was “Going To Georgia” by The Mountain Goats and was evidently a crowd-pleaser. I’ve got homework to do because if the original is anything like the cover, it’s got to be incredible. Laura played two more alone and then out came the rest of her bandmates for a few more on top of that! I guess you could call it one more (mini) set. You want to know what the most unreal part about their encore was? Kim, Alexis, and I watched it all from side stage. All of a sudden we found ourselves back there and just basked in the moment. Hearing my favorite songs and seeing so many friendly faces smiling was an incomparable joy.

When Against Me! came back into the green room, 12 year-old Alexis got to meet and briefly chat with her hero, Laura. My first thought was how huge that could be for her, to have such a powerful voice in music talk with her so kindly could inspire her to do great things. I’m elated for her. Ironically and kind of hilariously, it was the second time in a month I was within direct proximity of Laura and didn’t get to introduce myself. I just want to apologize for yelling “I love you” at her before. Next time. However, I did get to catch up with Andrew again and in my attempts not to be a fanboy I spilled to him that I was actually covering the show for Bad Copy. He jokingly asked if I wanted him to “butter me up a bit for a favorable review.” Dude… no buttering needed. That was one of the best nights of my entire life. Thank you. 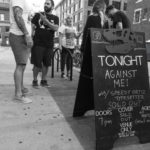 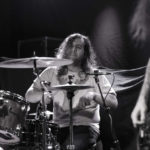 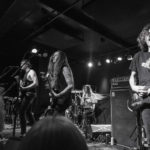 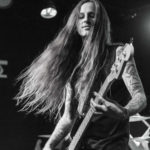 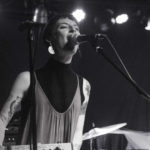 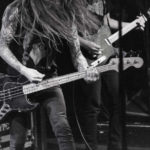 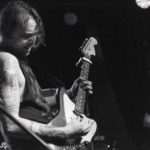 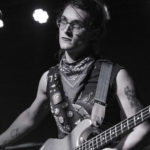 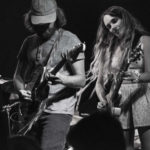 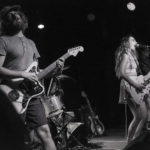 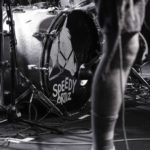 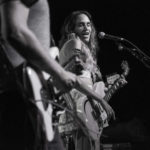 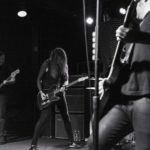 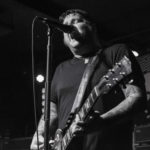 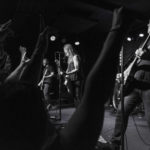 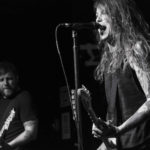 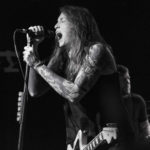 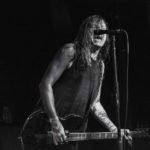 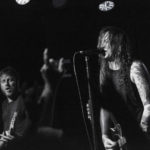 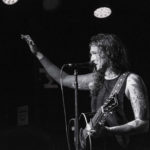 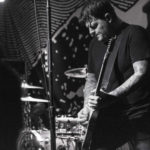 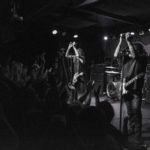