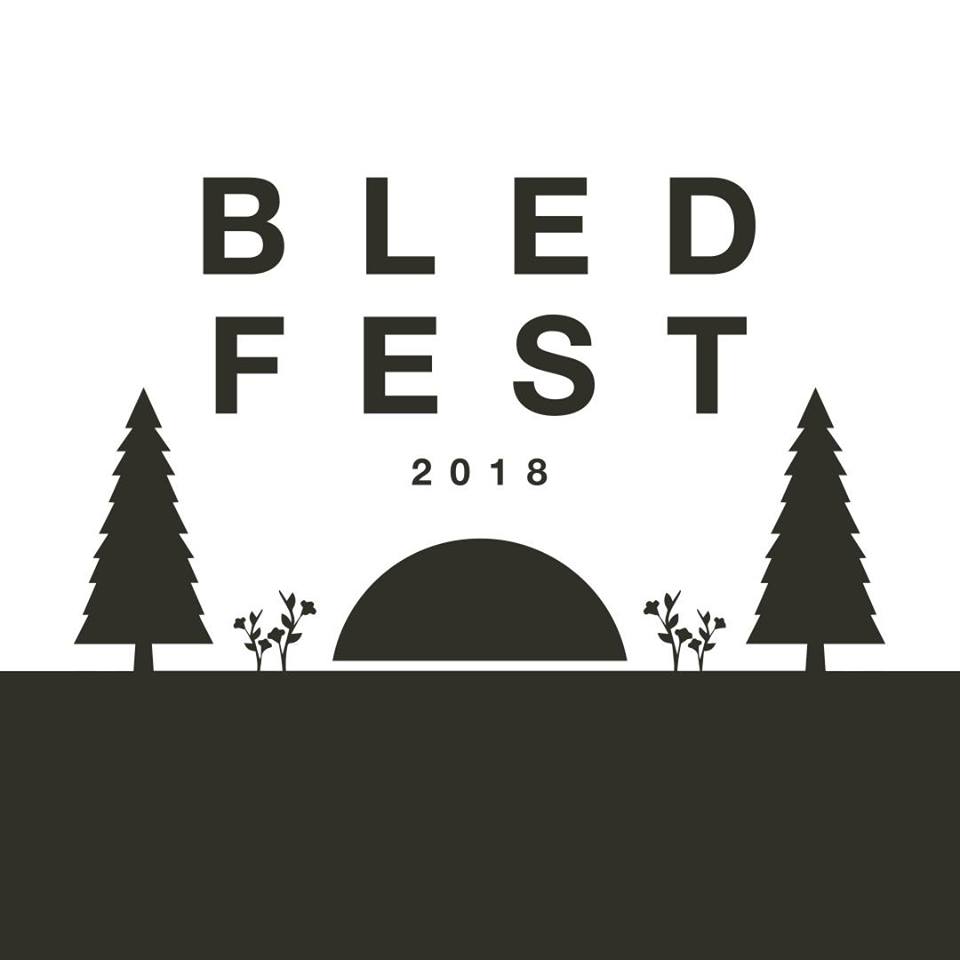 Growing up, I was never able to attend any of the cool punk music festivals I admired from afar because, as a disabled person that uses an electric wheelchair, I never really had reliable transportation. It’s not like I could just hop in a friend’s car and hitch a ride. But last summer that all changed. Through the help of my friends, family, a ton of kind strangers, and my own savings, I finally got the van of my dreams and named her Mabu (after the PUP song from their debut self-titled record, of course). Suddenly, the world folded open before me and I started planning trips. Most of them were just day trips and considered short by most standards. But a couple hours drive for me is huge considering I hadn’t really left my town of Grand Rapids, MI in years. The possibilities were and are seemingly endless now.

In addition to your usual suspects like Warped Tour, Riot Fest, Punk Rock Bowling, FEST, and so on, BLED Fest has been on my radar since I was a teenager. I even modeled my own GR-based annual music festival, Skitchin’ Fest, on their DIY origin and inclusive ethos. So when my friends and Skitchin’ Zine affiliates, Pontiac mariachi-punk duo Pancho Villa’s Skull, got announced for BLED Fest’s 2018 lineup, it was a no-brainer that I had to take ole Mabu for a trip out to Howell, almost a full two hour drive to the East side of the state. Shortly after the announcement, I traded some shirts and zines I made for a ticket from the PVS boys. I recruited my good pal Jason, the chef at the Tip Top Deluxe Bar & Grill (shout out Tip Top), to do the actual driving and offered my other good pal Haleigh, drummer of Elroy Meltzer, the passenger seat since she was looking for a ride out there. Our crew was assembled and our fates for Saturday, May 26th were set.

Having followed BLED Fest on social media for years and having had friends play it before, I knew a little about the venue and relative lay of the land. For instance, I knew that it took place in a high school building called the Hartland Performing Arts Center. I also knew it was spread out across five stages and that it was all easily wheelchair accessible via flat ground and ramps. But using a wheelchair for 26 of my 28 years has made me hyper-aware of my surroundings at all times, especially in unfamiliar territory. So I reached out to Nate Dorough who is the president of Fusion Shows, the promotion company that organizes the event, to see what extra details he could give me. He mostly reiterated what I was already aware of, but more importantly told me that the main stage setup would not allow for me to see well if at all. But that because I reached out ahead of time, he would make sure I was taken care of when I arrived. The fact that he was so quick to respond and help meant a lot and was encouraging, so I put my trust in him that all would work out exactly as I needed. It worked out perfectly, but I’ll describe that later.

Finally, the day arrived. Haleigh and Jason got to my place around 10:00AM, shortly after I finished scarfing down my protein packed breakfast. I typically eat light in the morning. But having extensively studied the schedule for the day, I knew there wouldn’t be many bands throughout the afternoon that I’d be willing to skip for a nutrition re-up. Plus, I’m usually broke and cheap and assumed fest food would be dumb expensive. Turns out, I was way wrong, but again there’ll be more on that later. Anyway, we filed into the van with little but our tickets, phones, water bottles, and a case of Lime LaCroix, and hit the road.

I can’t speak for my friends, but I was excited for the drive. Not having traveled much at all in my life, this was a big deal and I was looking forward to sharing the experience with them. I’d heard from other friends in touring bands that being locked in a van together for extended periods of time means you’re kind of forced to get to know each other on a more personal level. And I think Jason, Haleigh, and I did that as we talked about places we’d been (Haleigh had just returned from a trip to Paris), places we’d like to see and why, and of course our favorite bands, some of whom we were stoked to be seeing live later that day in Howell. We made good time and pulled up around noon just as the first bands were hitting the stage, when I realized I’d forgotten my projected schedule for the day at home. Looks like I’d be winging it with help from the BLED Fest mobile app.

The first band on our agenda was Rent Strike. They played on Stage C, smack-dab in the heart of the the festival. We’d quickly learn how useful, vital really, the two entrances/exits in this room would be to cut through and enjoy what was the most ventilated area of the building. Anyway, Rent Strike started right as we walked in and immediately noticeable was their full band set-up compared to the two-piece acoustic set they played when I’d seen them in the winter. Their eerie folk-punk sound is even more sinister with drums crashing behind John Warmb’s nihilist growls. The pretty songs sounded more lush thanks to the harmonies provided by the back-up vocalists. They ran through the bulk of their new record “IX” and expressed gratitude to the nearly full room for arriving early. I think Rent Strike was probably the punkest band on the whole bill, definitely the crustiest. John’s dad was there, recognized me, and gave me a free shirt. He was a sweetheart.

When I turned around, I found myself face to face with my friend Rolando of PVS! We’d agreed earlier to meet up so he, being a BLED veteran, could give me a tour. Our first stop was over at the main stage (Stage A) in the school’s gymnasium. He had something to show me. When we got over there, a staff member was waiting to give my whole crew all-access wristbands to restricted areas in order to better navigate the venue and avoid as much of the dense crowds as possible. And so we could access the ramp they’d built for me to get up on the side stage. Yes, you read that right. They built me a ramp so I could see properly and be safe doing so. If that isn’t taking wheelchair accessibility seriously, then I don’t know what is. I felt so at home. Then we watched the tail-end of Flint, MI slowcore rockers, Greet Death. According to the document I’ve kept of every band I’ve seen since I was 14, they were the 500th different one. I feel like that’s a decent milestone, at least considering never having been to a major music festival before.

After a quick but pleasant catch-up with long-distance internet bud, Eric of Mom Jeans, we jetted over to the opposite corner of the building to Stage D to see some more familiar faces, Grand Rapids hardcore mosh-inciters, Prison Suicide. Truthfully, as heavy music audiences have gotten increasingly violent, I’ve avoided that chapter of the scene more and more. But this band mimics the style of the first wave of bands I call my first love and adds their own Midwestern twist to it. I just couldn’t pass them up. Guitar player Zach, whose other band Distants I’d had the honor of booking earlier this year, let me squeeze into the side stage area so I could watch their blistering 20-minute set free of worrying about some idiot crowd-killing hate-mosher.

According to the time slots, Prison Suicide was supposed to overlap with another budding Grand Rapids artist of a much softer ilk, Vagabonds. But things were moving along smoothly, we arrived back at Stage C right as they began. Vagabonds is the brainchild of young punk turned emotive singer-songwriter, Luke Dean. This set was a surprise similar to Rent Strike’s in that Luke was playing with a brand new backing band, complete with drums and cello. The extra instrumentation marks a shift from their stark and gloomy older material to the fuller and forward-thinking direction expressed on the new single, “Honest.” It was released just a day prior and some folks in the room were already singing along to every word. Since he went to high-school with my little brother, it’s been a joy to watch Luke grow as a musician and person.

Finally, it was 2:15 in the afternoon, we reached the first part of the day where there weren’t really any bands playing we cared enough to see, so we went to check out some of the food selections. Naturally, we gravitated toward a couple greasy-ass Mario’s pizza slices for lunch. We filled our water bottles and headed outside to enjoy our grub in the fresh air. For as hot as it was outside, it felt nice compared to the thick humidity that was already building up inside. We were preparing for the sickest and longest stretch of back-to-back sets of the day.

Check back tomorrow for the rest of the afternoon coverage of this year’s BLED Fest!