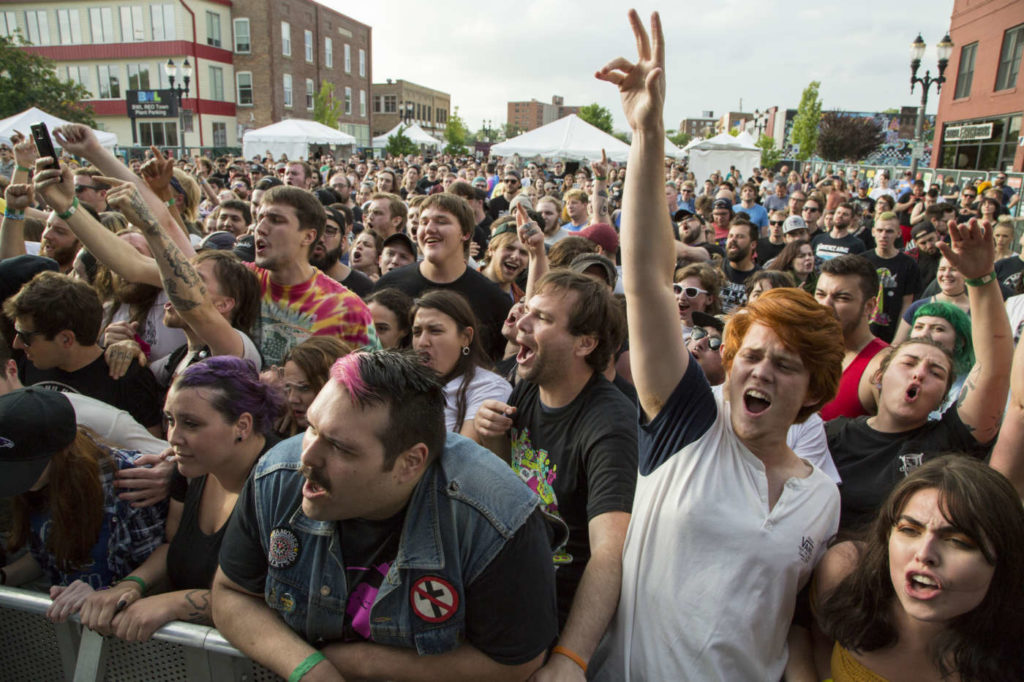 If you told me at 17, “Ty, one day you’ll be watching Against Me! in the open air, from the side of a stage, and hardly an arm’s reach away,” I’d have thought you were picking on me and I’d have gone to cry myself to sleep. That would have been too wild for even my day-dreamy, New Wave-obsessed, teenage brain to believe. But on Saturday, June 23, 2018 at Three Stacks Music Festival in Lansing, MI, that fantasy became reality. How in the hell did I get here?

In April, I was hanging out with my friend Jennifer at WYCE, the best damn local radio station here in Grand Rapids, MI. When she mentioned Three Stacks I thought that, despite the ultra-enticing all-star studded lineup, it was probably a long-shot for me to actually to go. If you’ve read my BLED Fest story, you know that I use a wheelchair and need friends to drive my van. I’m also a textbook over-thinker and worry about ‘conning’ my friends into carting me around too often even if they’ve never given me the impression that they mind at all. So I wrote the festival off as something I’d miss… until about two weeks before the date anyway.

My friend Bek had purchased two tickets as soon as they went on sale; one for her and one for her boyfriend, Chris, lead singer and guitar player of Bong Mountain. At the time, no one knew that Bong Mountain would eventually be invited to play the Three Stacks After Party show hosted by GTG Records. So Chris didn’t end up needing a ticket and Bek gave it to me. The next morning I woke up to a bunch of notifications. My homies Haleigh, Anthony, and Erika had posted on Facebook about wanting to go but not wanting to drive their car and Bek suggested they drive my van as I was in need of a ride. I’m a big nerd and thought this had to be a sign. Everything quickly fell into place. The universe wanted me to go. I’m not one to disappoint, so off we went.

To make the 2:00PM gate opening, we convened at my place at 12:30PM and left at 1:00PM. What can I say? I’m a stickler for time management. All week, the forecast predicted heavy rain storms throughout the day and the gray skies and humid air definitely made it seem like that was a possibility. We stocked my backpack with umbrellas and raincoats in case we needed to shield my chair from the rain. Like I said, there was no way I was missing this festival. Against Me!, MewithoutYou, PUP?! Are you kidding me?! We made good time except for seeing a car flipped on its roof on the highway… yikes. None of us were familiar with the area but we slipped right into a parking spot as close as we could get to the gated off streets of REO Town.

My crew arrived right at 2:00PM and were some of the first people to get in. My pal Miski, lead singer and guitar player of City Mouse who’d be the opening act of the festival, hooked me and Haleigh up with a backstage wristbands with side stage access because I’m a “member of the press” now. Hi Mom! I hope you’re proud! This just got ten times more exciting. Some of my idols would be there and now I’d be within real proximity of them.

After shortly scoping out the festival setup and meeting up with a bunch of our buds from back home and around Michigan, City Mouse took the flower-adorned stage. This was the fourth time I’ve gotten to see this band and they’re consistently one of the best in the business despite having an ever-changing lineup. Seriously, it’s been different every single time I’ve seen them. This time, however, they featured Davey Tiltwheel on second guitar and I don’t think they’ve ever sounded more crushing. Maybe it was just my admiration of their persistence or my pride in the fact that they played my own Skitchin’ Fest just a few weeks prior, but I couldn’t help but wear their t-shirt that day and grin from ear to ear throughout their breakneck 25 minute set.

Next up was the Brooklyn, New York-based solo act of Elise Okusami called Oceanator. Admittedly, I went into her performance completely blind. Really I wasn’t even aware that she was tourmates with Petal and Camp Cope until just before she started to play when I overheard someone whisper it to their friend. But by the end of her set, she won over both myself and my friends. She played most jangly surf-pop on the electric guitar and tons of pedals. Okusami’s voice was the real bread-winner though. If you wanna hear singing with real, dynamic range, check out Oceanator. Plus she just exudes cool with her ultimately casual stage presence and jet black sunglasses.

Petal is the rock band brainchild of Scranton, PA singer-songwriter, Kiley Lotz. I’m familiar with her first record and work with members of Tigers Jaw, but they’d just put out a new album called Magic Gone that my friends Kaitlynn and Rolando said was absolutely incredible. They were really stoked on it. Kiley and her friendly backing band played a ton of the new material. I’m here to confirm – yes – it is indeed all absolutely incredible. They perfectly blended charm and professionalism and it hit me that this band is going to be around for a long time. I’m really lucky to have gotten to see them in this setting.

The stage was nice and high, probably like five feet off the ground, framed with big impressive lights, and barricaded at the bottom of a hill. Toward the back of the two gated off downtown blocks were port-a potties and picnic tables where you could comfortably see the distant stage. To the west were the iconic, 60-year old tower of the Eckert Power Plant for which the festival was named after. Along the edges were merch tents, beer tents, and food trucks. Honestly, most everything was pretty overpriced but justifiable due to the super cheap tickets to get in. I feel like a couple of the bands on the bill would price their individual shows around $30. So $30 for a full day featuring them all was an incredible bargain.

This was the first ever Three Stacks Festival and was hosted by Fusion Shows who also runs BLED Fest every spring. BLED is an absolute blast, but definitely goes at an alarming pace spread across five stages and 70 bands. Three Stacks seemed to be more geared toward my age of punks, the 27-35 year old range. It operated much slower with only two stages and thirteen total bands. I’m not sure if they plan to expand it in the future, but I don’t think they need to. There was a nice balance.

Erika spotted Marissa Paternoster from Screaming Females hanging out by a curb. We mustered up the courage to go say “hi” and to my delight she remembered me from when we met before and when I wrote a review of their newest album earlier this year. What an icon! I didn’t want to be a bother so we kept it brief. I went for a pee break, linked up with more buds, and explored more of the festival grounds before we got into the meat of the lineup.

Check out the below photos of the first half of the day taken by Matt Oberski: 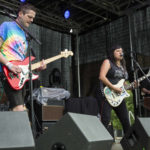 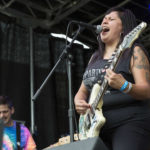 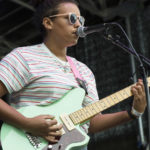 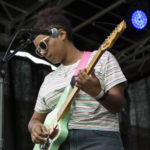 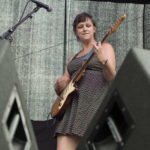 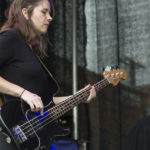 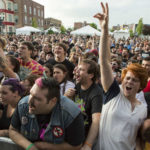 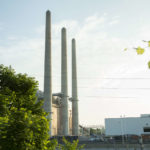 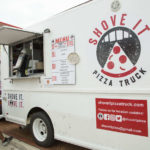 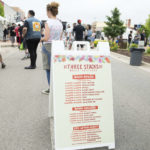