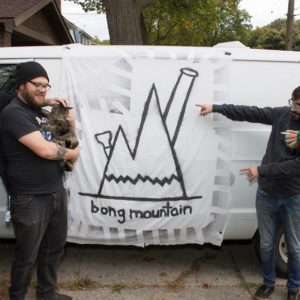 The Legend of Bong Mountain

Somewhere there exists a dreary village at the base of a mighty mountain. The village is populated by people or elves or some shit, all of whom are totally miserable all the time, their lives are super boring. The mountain, for reasons no one knows, they call Bong Mountain.

Anyway, one morning in mid to late April, the 19th or 21st I believe it was, the people or elves or whatever saw that the top half of the mountain had become shrouded in a thick haze. The people or elves, or something like that, gazed with wonder at the mountain as they had never seen anything like the thick haze that now enveloped Bong Mountain, and their miserable lives were so boring that they had nothing better to do. They couldn’t take their eyes off it. The mountain that is. Bong Mountain.

When the van shaped object came to a stop, four “musicians” emerged from inside and began playing the sickest of jams. The miserable villagers (who cares what they are at this point) began to dance and rejoice and forget about their miserable, boring lives. The villagers and the “musicians” partied well into the evening, smokin and drinkin and munchin mad pizza. As the sun began to rise on a new day, the four “musicians” got back into the van shaped object and returned to their place, high upon Bong Mountain.

Every so often the four “musicians” will once again make their way through the haze, down off Bong Mountain, and bring their sick jams to wherever they’re needed most.