I take photos; that’s my job. From live shows to promo shoots to photos of dogs I’ve encountered, I’ve probably taken at least 50,000 photos this year. It was hard to choose, but here are ten of my favorite photos that I’ve taken of bands in 2017. 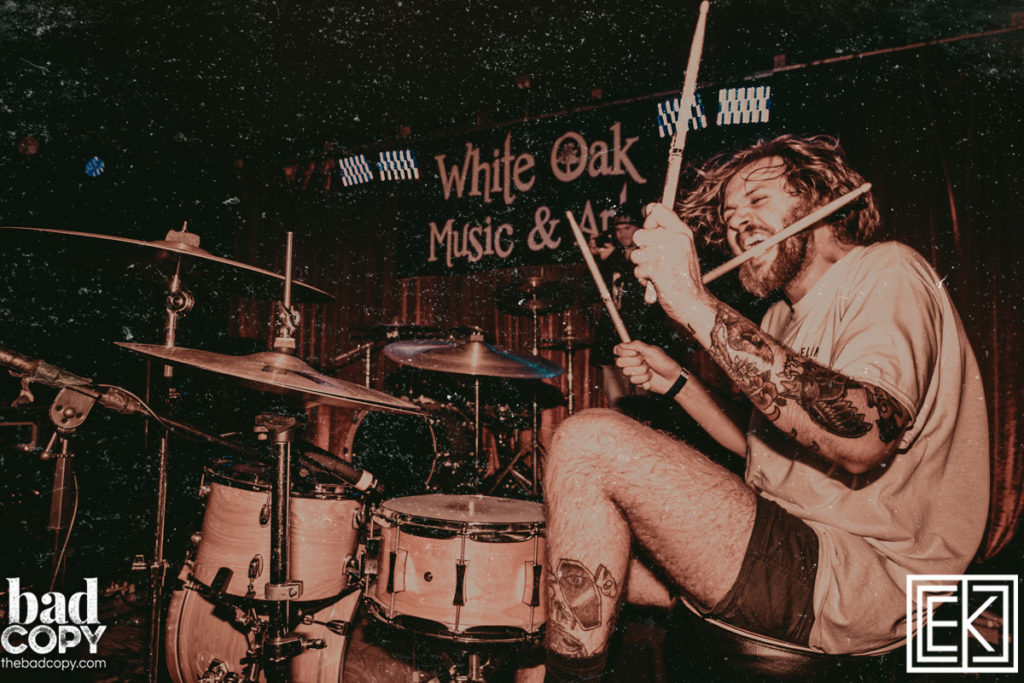 I had never heard of Bungler before this show and only headed out that night to see my buddy who was doing march for them! I ended up snapping some shots of all the bands that played but this one was really awesome. Everything happened so fast and I didn’t even realize Sky had a third drumstick in his mouth until I looked through the photos when editing! These guys ended up crashing on my couch after the show and were some of the coolest and nicest dudes I’ve met. 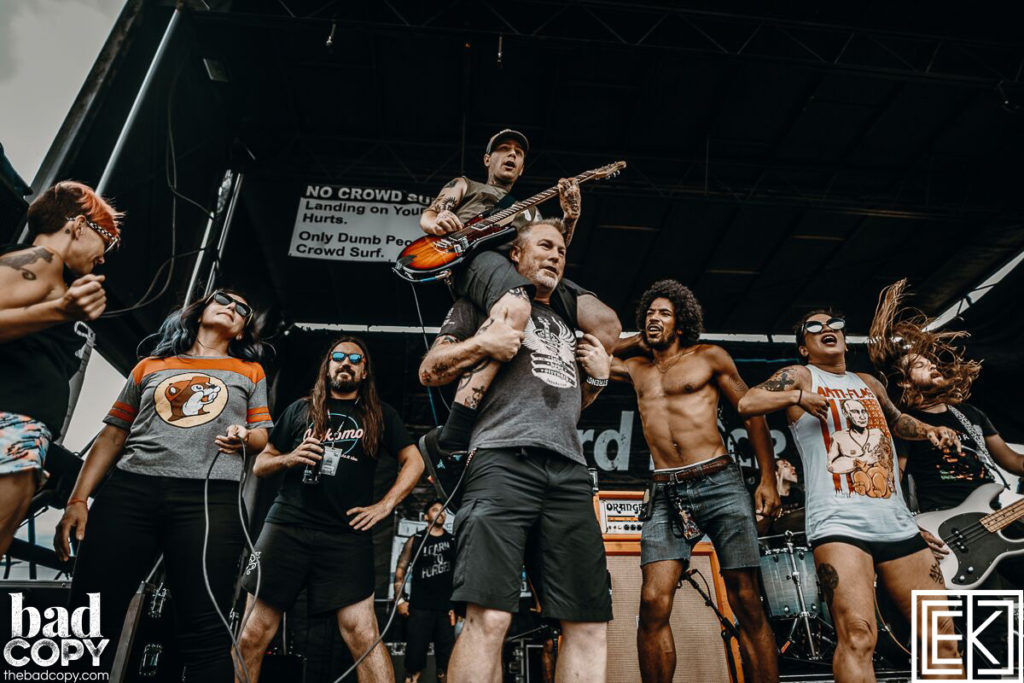 When The Ataris took the stage on their last day of the tour, everyone already planned on surprising them to sing “Boys of Summer” with them. Chris took his guitar and mic stand into the crowd while everyone went crazy on stage! These are some of my favorite photos from Warped Tour because all my friends are together and having fun. 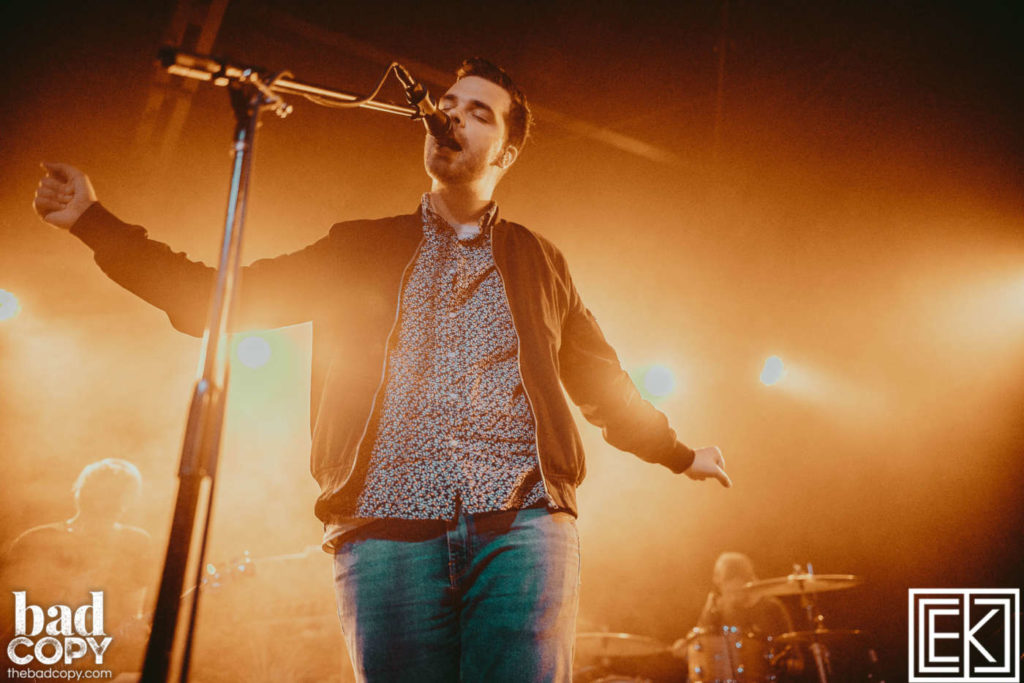 I will always have a soft spot for Balance and Composure, and every chance I get to photograph them is phenomenal. I took this one at The Glasshouse in Pomona, CA when they were on tour with From Indian Lakes and Queen of Jeans. It’s such a simple photo but I love it so much. The lighting was so soft and filled the stage perfectly creating that orange vibe. 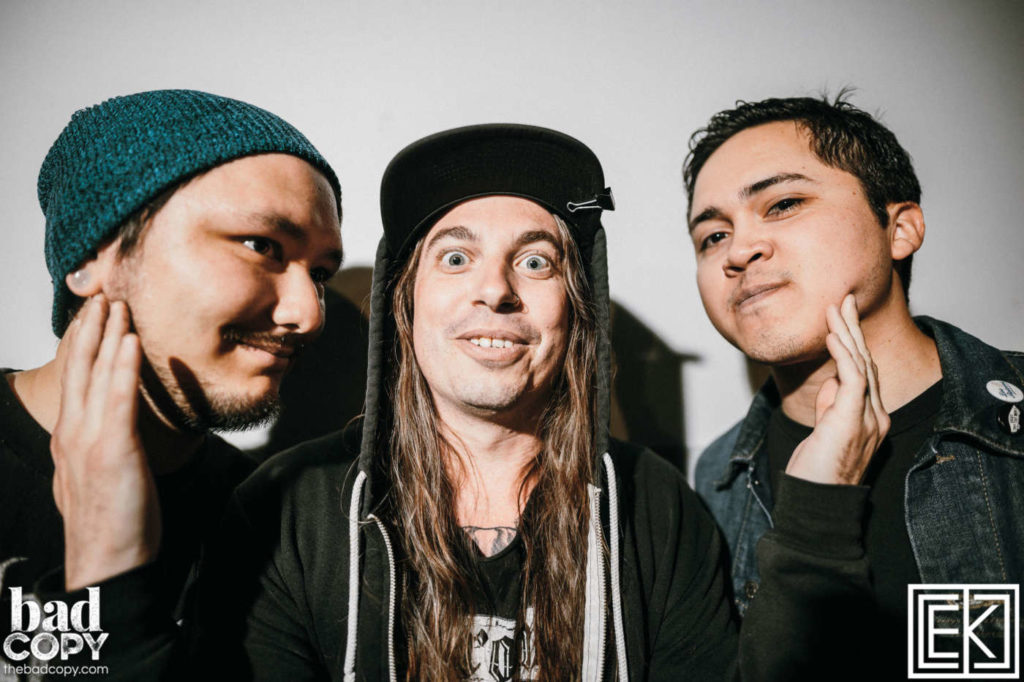 Caskitt is one of my favorite bands. I made plans to meet for a promotional shoot before their show at a pizza shop in Pomona, CA. There were some scheduling conflicts day-of and I ended up getting this shot in front of a white delivery truck in the parking lot minutes before they played that night. My boyfriend helped me hold up my flashes and I told the guys to “just be themselves.” It was one of the most un-professional promo shoots I’ve ever done, but it sure was a blast. 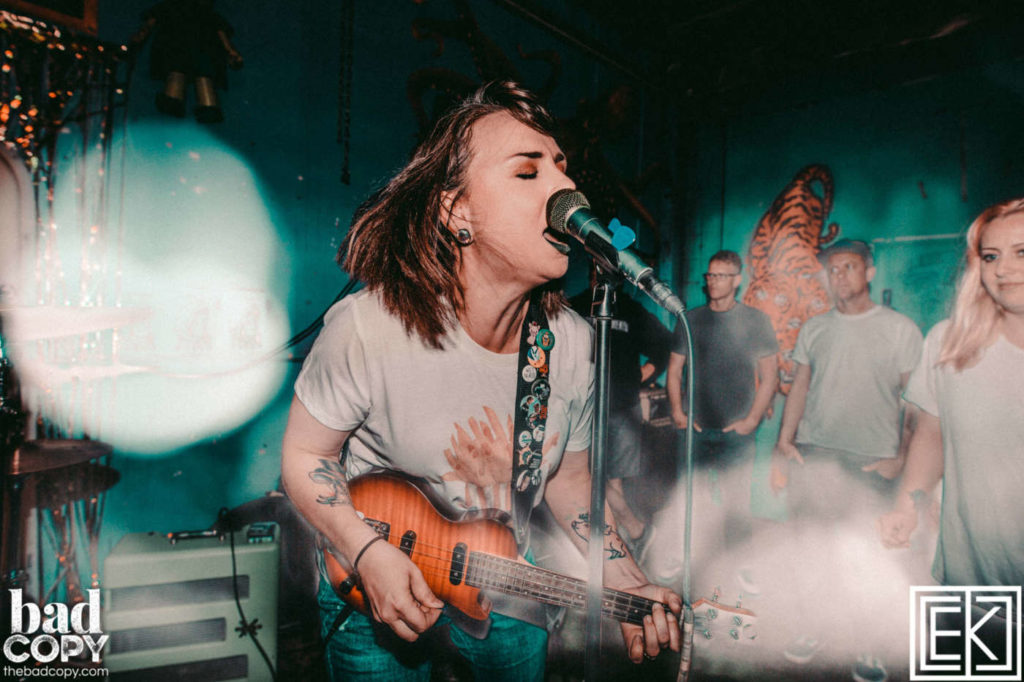 I tried something different at this show, and I’m super pleased with the result. One of my favorite things about being a digital photographer is exploring new ways to alter my images creatively in post. I captured this super cool shot of Melissa of The Stupid Daikini at VLHS in the spring and added some cool and weird orbs around her. Bonus: Rosie from ToyGuitar made the frame too! 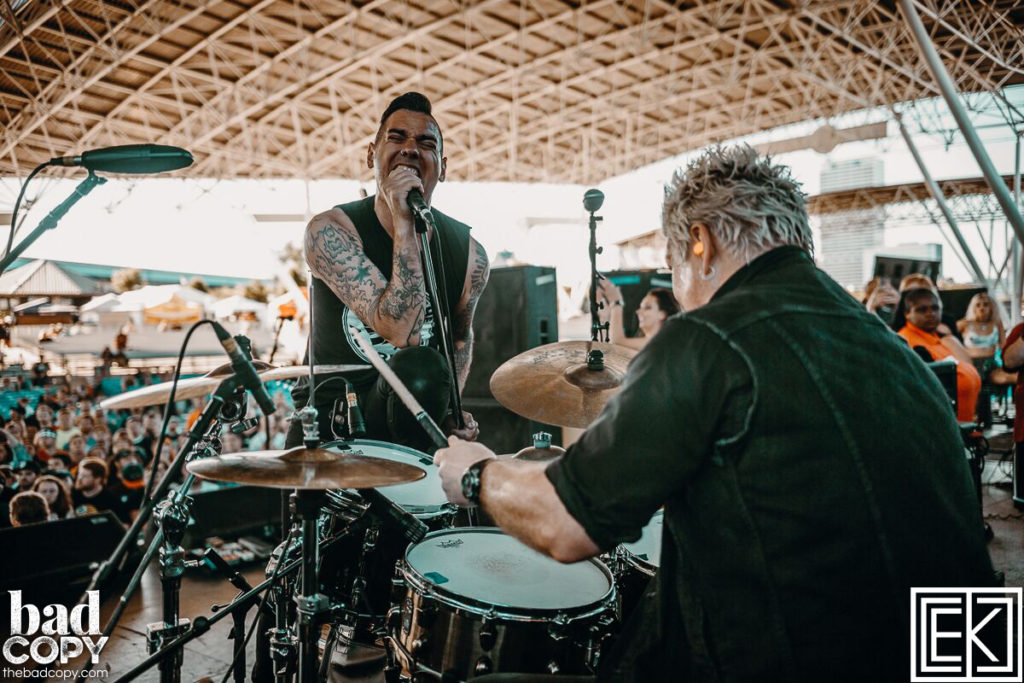 While on Warped Tour, I shot Anti-Flag almost everyday. Out of all the shots I have of Justin yelling at the crowd or Chris 2 jumping off the guitar amp, this one is definitely my favorite. It was taken on Anti-Flag’s last day on the tour in Milwaukee, WI. At the end of their set, they invited all of our friends onstage to sing along to the chorus of “Brandenburg Gate.” It was one of the coolest, most memorable sets I’ve shot this year! 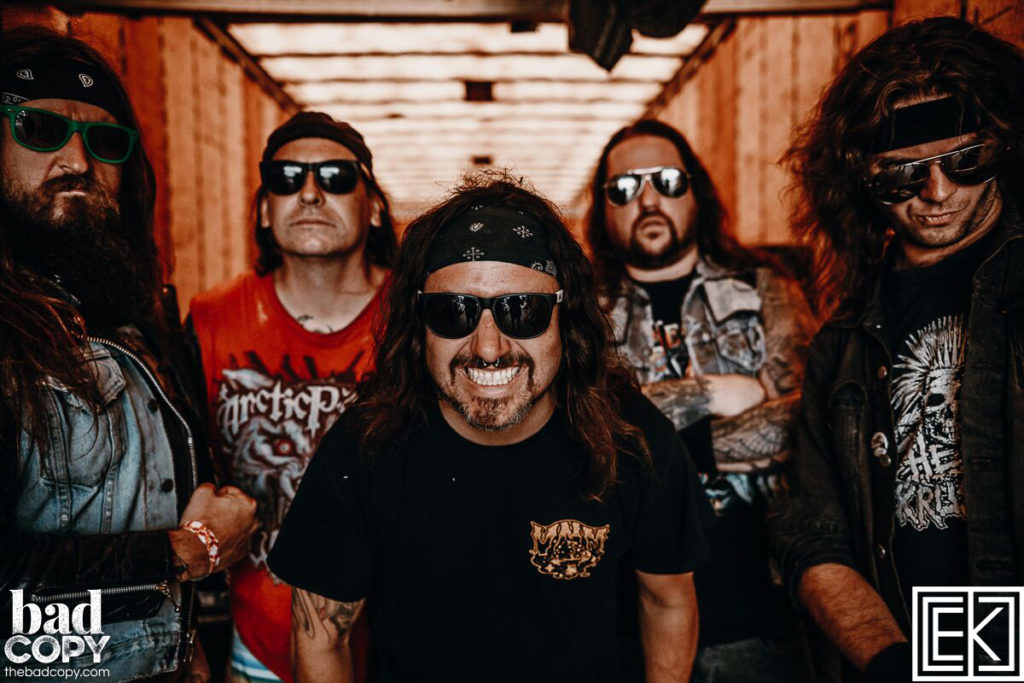 This was taken during another last minute, unplanned shoot that were always happening this summer on Warped Tour. Tony texted me about an hour before Municipal Waste‘s set one day and asked me to meet him and the band at The Hard Rock Stage and I took a couple photos of the group. I had them stand inside the gear trailer for this one and it ended up being a great idea! The trailer created a really cool depth in the image and I think it helps frame the photo really well. 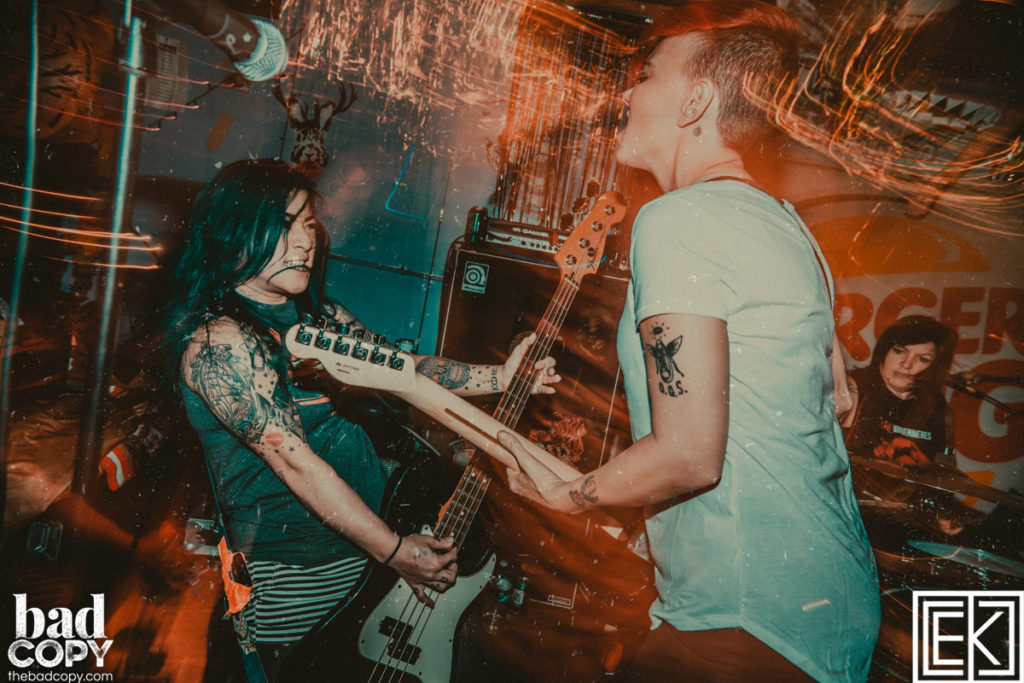 This photo means a lot to me. When I shot it, I didn’t realize it would. At first it was just a cool photo of a cool band. But now, I see it as documentation of a really special day. Back in February, my good friend Marty – who is known for booking amazing and talented bands in Southern California – put on a show to celebrate his birthday at my favorite DIY space, VLHS (which unfortunately shut down this year). Bad Cop / Bad Cop headlined the show and it was the first time I had ever seen or met those ladies. Photos from this show introduced me to the wonderful people in Bad Cop / Bad Cop and gave me an opportunity to spend a summer on Warped Tour with them! I also have photos from this set featured on the back of their new album, Warriors, which I think is one of the best albums to come out this year! Losing VLHS was a hard hit, but I feel so lucky to have documented amazing shows like this one. 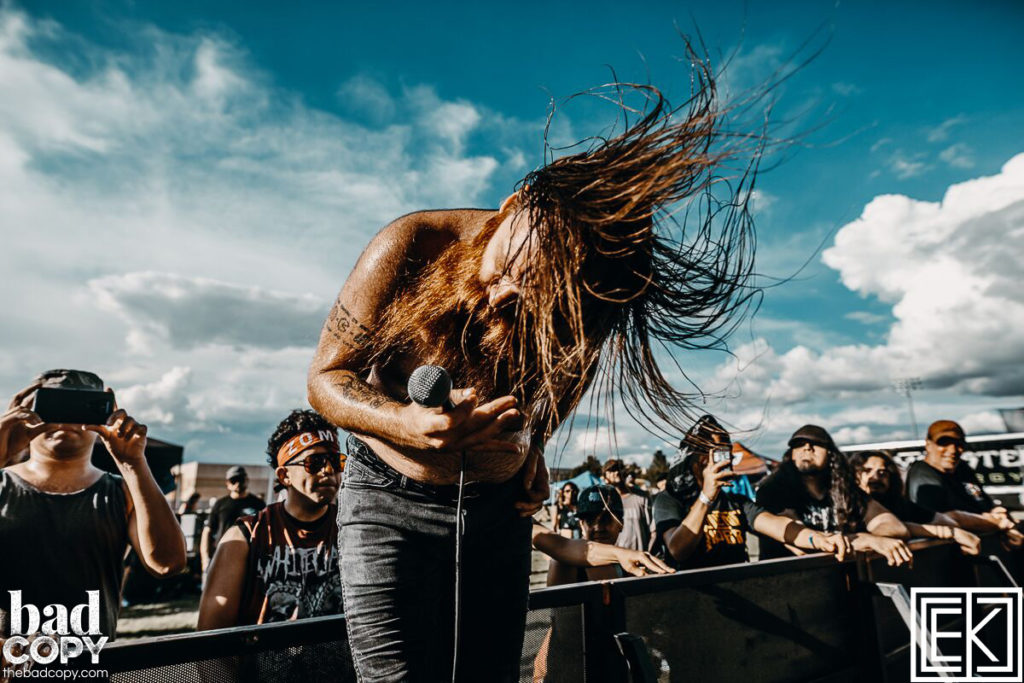 Valient Thorr was one of my favorite bands to photograph this year on Warped Tour. During their set everyday, Valient Himself (pictured) would jump offstage, climb the barricade, and have the crowd sit down and “row” with him. I got this shot in Las Cruces, NM as he was about to hop back on stage. I love the action of his hair moving and how contrasts so perfectly against the blue sky behind him. New Mexico really has the most amazing clouds, and I think that adds a lot to the photo as well! 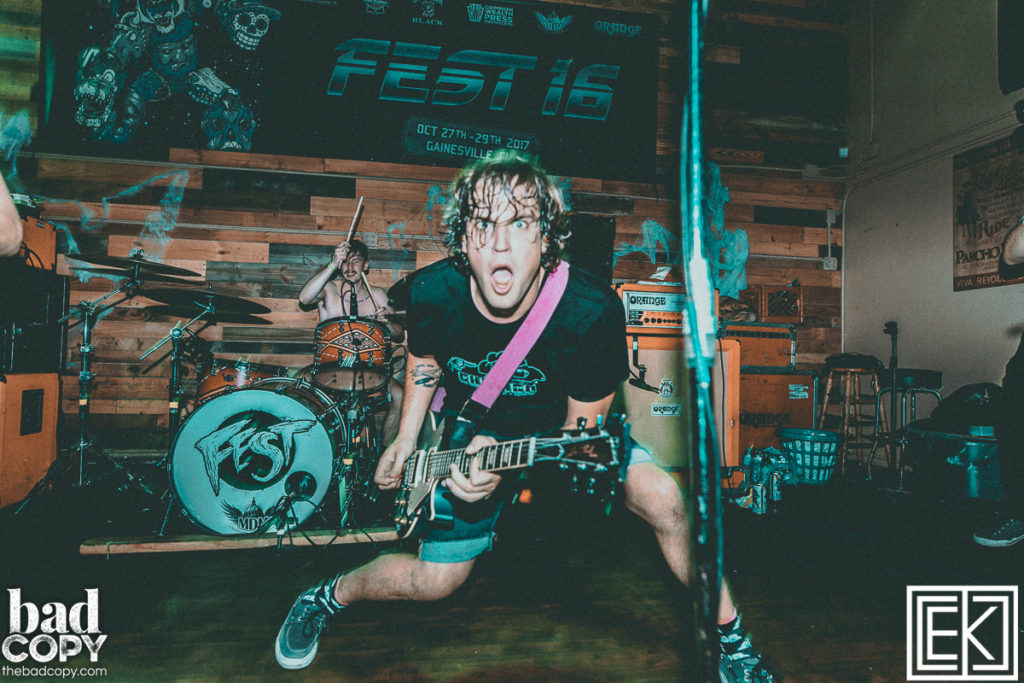 The moment I got this shot, I was so excited. It was my first day at FEST and honestly, I was already drunk. I’m usually pretty adamant against mixing drinking and working but it was Fest season and Fest season means drinking. All. Day. My photos of Direct Hit were my favorite of the whole weekend, and this photo of Devin is my favorite shot. Out of all the photos I’ve taken this year, this one clearly takes the cake, and I’m actually quite proud of it.