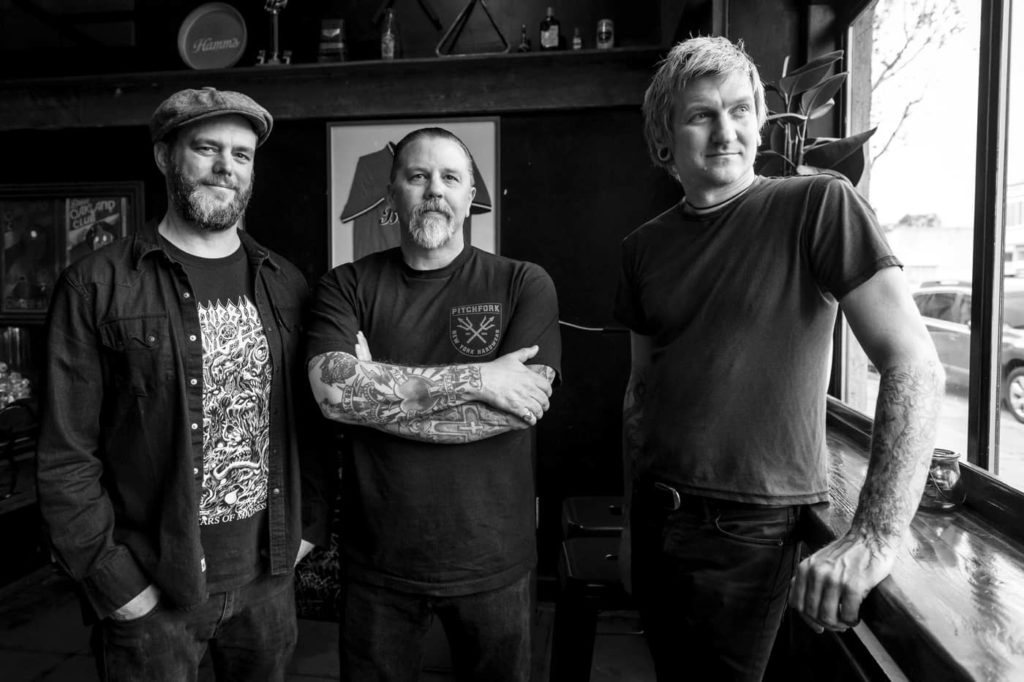 When I heard of Charger I was pumped! A band anchored by heavyweights Matt Freeman (Rancid, Operation Ivy) and Jason Willer (U.K. Subs, Jello Biafra’s Guantanamo School of Medicine), complimented by the insanely talented Andrew McGee. I tried to think what type of music this trio would produce. Was it going to be classic East Bay punk? Old school rock? Heavy metal? I had to get my hands on their self-titled debut EP and find out for myself. Armed with my notepad and a Charger coffee mug full of the fine Guatemalan dark roast coffee from McLaughlin Coffee Roasting Company I got with the 12” record, I buckled up and braced myself.

From the first track, I was immediately transported to a Mad Max, early Iron Maiden, heavy rock world that got me head banging, shredding my air guitar, and busting out my best Angus Young dance moves for twenty minutes of pure revelry. As a fell back into my chair, not sure what to write, I could only think back to an article I read after attending a sold-out Motörhead concert back in 2011 written by Bob Gendron for the Chicago Tribune that summed my feelings perfectly:

“…the sounds evoked the sensations of tanks rumbling through living rooms and B-52 bombers flying just a few hundred feet overhead.”

From the slower, prog-rock track “Damage” to melt facing solos in “Fall Out,” blanketed with in your face Matt Freeman vocals, this EP will be a new staple in any heavy rock enthusiast’s record collection.

Once I caught my breath from this religious rock experience, I was fortunate enough to send the band some questions about the band and the new record that you can check out below.

Charger’s self-titled debut EP is out now via the fine folks over at Pirates Press Records and is complimented by a slew of awesome caffeinated and non-caffeinated merch available on the Pirate Press webstore.

Matt: I didn’t have a hard and fast vision. I love 70s and 80s hard rock/prog and metal and it just started as an experiment to see if I could write some songs in that vein. Me and Jason started playing together and started experimenting and expanded on that and then Drew came in and it all came together the way it has. We all bring in something different and that’s reflected in the EP.

Listening to the EP it seems like Charger has really defined its sound, which typically takes bands a while to do. Was there one song that defined what your sound was going to be?

Andrew: There wasn’t really a song that unified everything, more like an era of metal and punk from maybe ’77-’83, with a drop of the first Black Sabbath record.

With a lot of the songs already worked out by Matt and Jason before Andrew came on board was there a shift in the songwriting process once he came into the fold or did the focus continue to be the rhythm section?

Andrew: ”Crackdown” and “Victim” are pretty much the same from the beginning. But the rest of the songs evolved as we all started learning to play together as a band. The focus is always writing a great song. How do we turn these riffs and ideas that we have fun playing into a great SONG.

Did you have similar or different approaches to recording this EP in comparison to other projects you’ve been in?

Matt: We were really rehearsed and we did all the basics together in the same room. We wanted to capture as much live energy as we could. Then we overdubbed guitar and vocals.

The third track on the EP, “Damage,” is so different than the faster punk, metal, almost Motörhead-esque tracks that dominate the EP. It’s almost got a muddy blues/grooves/funk feel to it. Tell us about that track and how it was developed.

Just in case this EP didn’t get folks energized enough on its own, you’re also releasing a coffee with this record!? How did that come about and tell us a little bit about the coffee itself.

Jason: We rehearse during the day and coffee is a key factor for Matt and I. I’ve been drinking the Guatemalan Dark Roast from a local roaster called McLaughlin for years and go through a press pot or two at rehearsals. We thought it would be a cool idea to offer the same coffee that powered those songs to everyone.

What can Charger fans expect from the band for the rest of 2019?

Matt: We are going to keep playing shows, writing, and recording.