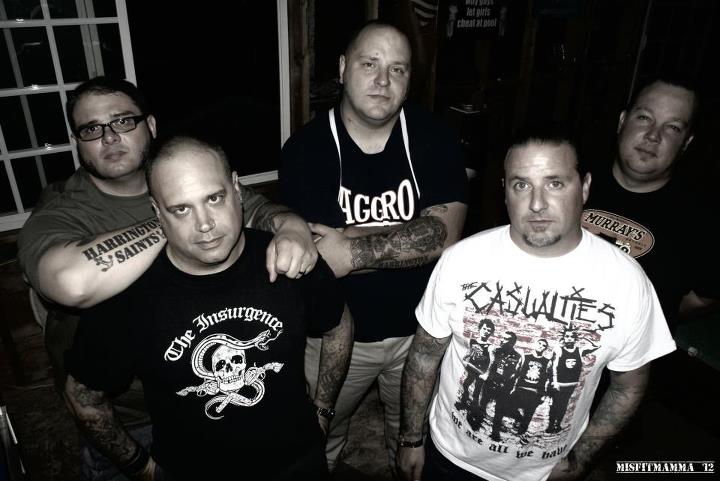 When I was first introduced to Punk, I was given albums from bands such as Cock Sparrer, Cockney Rejects, and Sham 69. Needless to say this sparked a deep love for Oi!/Street Punk music for me as well as the family that comes with it.

Harrington Saints is a staple in Oi! and one I found in my journey into more American Oi! bands. Since their formation in the Bay Area circa 2005, they’ve been pumping out an extensive discography that continues with their latest release 1000 pounds of Oi! available now on Pirates Press Records. I was fortunate to talk to lead vocalist Darrel “The Boss” Wojick about the new album, writing music in the Oi! genre, and lots more. You can see the whole interview below.

Since your first full length album Dead Broke in the USA ten years ago, what would you say is the biggest difference for you as musicians from then to now?

I would say we work a little longer on crafting the songs overall. Not merely ’til it sounds good. But spending time and attention to more details. Plus it’s continually been more of a group effort.

Harrington Saints has released a slew of releases in many formats. What made 1000 pounds of Oi! an LP and not a couple EPs?

The story actually begins on the airplane over to the UK for tour. Mike C. had his iPad and asked if we wanted to hear some riffs of songs he had been working on. Turns out we were pretty blown away by a lot of them and knew we could make these into great songs.

There were also about 40 of them, if I am remembering correctly! So we noted about half a dozen to begin with. It could have been a double LP probably! We also used a new tune for the Northern Aggression comp on Insurgence Records that came out this last spring.

As a band, your song writing has always been growing. Was there anything different you did heading into the studio for 1000 pounds of Oi! or has the process been refined to a science?

We are always growing and experimenting. I have been sticking to lyrics and melodies, last couple records. To be honest the other guys are far better guitar players than I am.

As far as different? We took our time much, much more… and (I wouldn’t necessarily recommend this) recording three songs at a time. We thought that would be more leisurely. It really wasn’t and it took a lot more time.

In short, we are growing because everyone is contributing more, experimenting more, etc.

I always felt like Oi! as a genre has a dichotomy of strong political and social justice messaging right next to beer drinking, fun, and having a good time messaging that is more pronounced in Oi! than in Punk, Hardcore, or any other genre. When writing and putting together albums, how do you find the balance between these two very different messages?

Great Question! Yea, I think the old saying of Oi! music is still true, and should be adhered to…”having a laugh and having a say.”

I just write about stuff around me, lately what pisses me off. Which is all around these days! It’s funny, because we haven’t written a lot of beer drinking anthems lately, but we sure have been typecast in that light. I bet if we looked at the whole released catalog, it would be 10%.

1,000lbs is by far the most serious record lyrically and indicative of the times.

You’ve put out four music videos leading up to this release of 1000 pounds of Oi! and they are all pretty different. Talk about those music videos and why you decided to do videos for those songs in particular. Was there one that was your favorite to shoot?

I loved shooting “PRESSURE” because I didn’t have to be in it!!! I had that idea and, though it’s not a ‘single’ type song we would normally do an interview for, we said whatever we’re doing like three more videos, so fuck it! It was a blast shooting it. And cheers to our buddy Bryan McCann for being a good sport.

All the videos were shot by Paul Stevens by the way. We owe him more than we could ever pay. He is always there to lend a hand.

The other three (“Fremont Train,” “State Of Emergency,” and “1000 lbs of Oi!”) were all shot the same day with a green screen behind us. We had a few ideas but not much at all. A lot came up on the spot or Paul thought of in post-production! Only had general ideas for each one.

We decided on those three songs to do videos for because we feel “Fremont Train” and “State of Emergency” are strong singles from the record. With best messages as well. “1,000 lbs of Oi!” being the title track, we threw that on the list as well.

What can Harrington Saints fans expect from the band for the rest of 2019?

More shows, thankfully, than last year! Haha. We are trying to get to a couple places we’ve never played before the year wraps up. Also, we may finally start mixing a live record we recorded in Germany in 2017.

Going totally off topic, I heard “The Boss” is a DJ as well. Tell us about how’d you get into it and what you’re currently spinning? Does anyone else in the band have other side passions?

Well I was DJing with some friends every once in awhile at our local spot trying to get my chops back… I was on college radio while at University.

It’s been awhile now and I live a bit further away. I really enjoy it. I like to spin Reggae a lot. Do a Punk set sometimes and sometimes a more Glam set. Whatever I’m in the mood for. All stuff I listen to anyway.

Forrest likes old cars and motorcycles and is quite good at restoring them. Many of us love sports and travel. I’d say music is our most consuming passion for all of us! Between that, family and jobs, there isn’t much time for anything else.