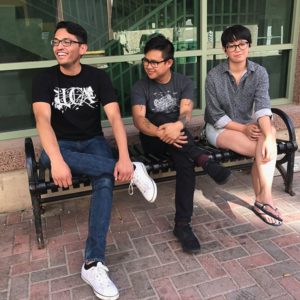 lettering is a three piece band from Chicago consisting of people who wear glasses (let it be known that Croakies are OUT and Temple Tips are IN). They are often placed in the ‘approachable even for parents’ category with songs that express concern about finding the right career as well as improving your mental health by moving on from your past mistakes.

lettering is described as an indie band that was put through a Japanese punk band pasta maker and plated by a person who often creates deconstructed versions of horror movies. With lyrics that delve into the obscure and obscene, and choruses that repeat as scarcely as possible, you will rarely find a dull moment whilst engaging with your ear holes. They can’t replace EVERY band but they can [try] to replace ANY band.