Repetition is the process of recollection…

* Though neither song achieves their respective redundancies consecutively, honorable mentions go to The Who’s I Can See For Miles and The Cure’s Meathook which repeat their words (“miles” and “meathook,” respectively) over 60 times each.

Repetition is the process of recollection.

In many cases this lyrical recurrence isn’t really a bad thing. If I hear any of those songs above I’ll not only let them keep playing but I’ll usually start singing along. For any budding songwriters out there looking to cheat the system here is a master class on the subject.

But like everything, someone has to come along and overdo it: 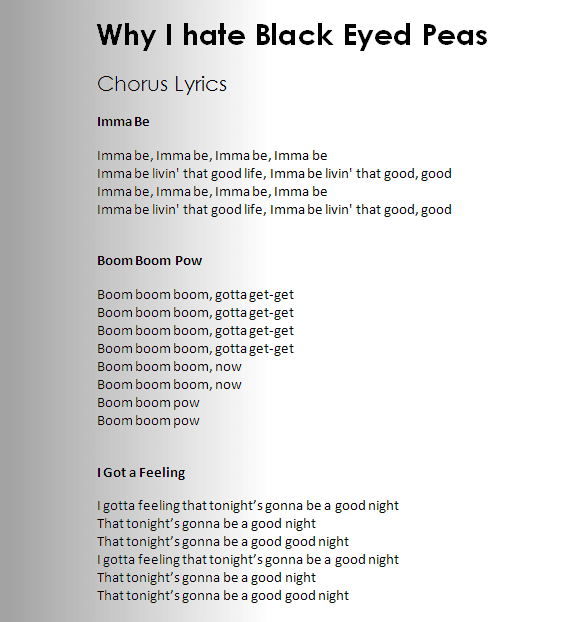 BUT, if a song is creatively produced, and more importantly, packaged with an aesthetic that speaks to people, repetition can become a crowd-pleasing singing-a-long affair, if not an outright international experiment in covert socio-political manipulation.

Seemingly every time I’m on a road trip and the song below comes on, everyone is moved to sing along for its entire 5-minute duration, not just the verse with “fuck” in it. The song builds and lingers and builds some more until the big “add it up add it up!” refrain that takes over the entire ending of the track. Such crescendo and catharsis is usually only achieved when a song takes minutes upon minutes to indulge itself. I usually don’t have that kind of patience but some songs and some bands are able to pull it off. IMO, Violent Femmes are one of those bands and this is definitely one of those songs.

Repetition is the process of recollection.

Like so many songs I’ve covered here, its meaning never really hit me until I was recording the vocals, with the lyrics all spelled out in front of me. Check me if I’m wrong but I think this song is about a boy losing his virginity to a prostitute? Or is it an incel tragedy where a kid shoots his mom? Or maybe it’s just another standard rock song celebrating basic maths?

Download/Listen to the audio here:

Craigums · LoveSong of the Month – Add It Up (Violent Femmes cover)