Before I even had a choice my nerdy jock father introduced me to Airplane! and Queen and, resting culturally betwixt the two, “Weird Al” Yankovic. Is it any wonder that I am making greenscreen videos of the Good Times’ theme song all these years later? 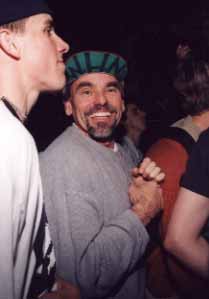 My dad was an avid sports fan and even engaged in some form of athletics right up through the weekend before he passed. Playing, spectating, it didn’t matter – if there was competition, he was in. Unfortunately though, I did not excel at anything conventionally athletic. Sure, I could evoke the spirit of many a contact sport through 25 straight minutes of jumping and enduring numerous broken appendages at the hands (and feet) of Devon Morf, but I couldn’t purposely sink a jump shot or even make it through one of the aerobics classes that my dad taught religiously for nearly 40 years.

What’s worse, I chose a lifestyle whose very essence eschewed security or providing any quantifiable way to measure success. And since security and success tend to rank pretty high on most parent’s wishlists for their kids my activities caused some discord and unease between us over the years.

Don’t get me wrong, we still swapped Stephen King books and recited scenes from Spinal Tap and he once impressed my friends in the pit at an Exodus concert while just minutes before he and I were hanging out with Rocky and Mike Muir from Suicidal Tendencies, but still… my way of life made it understandably hard for a father to feel comfortable with his son’s trajectory.

That all changed one night.

I’ve sunk my energy into many things that could be filed under “silly” and/or “ridiculous” but few distill the two quite like my run as a competitive air guitarist. What started as a dare quickly evolved into something so thrilling, creative and satisfying that I devoted ten years of my creative and professional life to it.

I used to say that the only thing weirder than winning an air guitar contest are all the opportunities that befall you afterward. (My friend, Jackson, liked to say “Craig finally took off his guitar and got serious about music.”)

I traveled the world on someone else’s dime, made some very dear friends, and sometimes I made more money in one day than I’d made in a year prior (according to my taxes). And I did that all with… well, nothing. With an air guitar. I unwittingly took “silly” and “ridiculous” to places heretofore unknown, which is a pretty silly and ridiculous way to achieve something.

U.S. Air Guitar competitions are raucous occasions fueled by a complete and total buy-in to the absurd. It is a loud Rock ‘n’ Roll affair punctuated by color comedic commentary by judges ranging from SNL cast members to movie stars to legitimate rockers to Malcolm Gladwell. 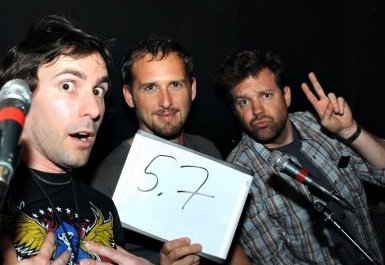 I knew Ted Lasso when he was a dick, 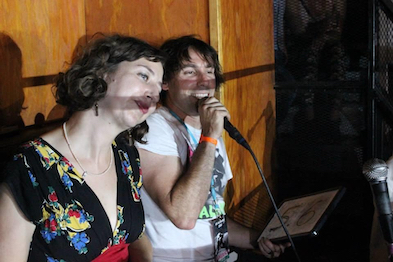 and Kristin Schaal before she was in a “Weird Al” video.

One night in 2008, I was representing the great state-in-waiting, Washington D.C., at the US Air Guitar National Championships. The stakes were high – thirty regional competitors from across the country were all vying for the top spot, a rite that would afford them a place in the Air Guitar World Championships in Oulu, Finland (the birthplace of competitive air guitar, natch). The event was held at the sold out Regency Ballroom in San Francisco and over 2000 people crammed inside, my parents among them.

I broke my thumb in the first round (as any earnest air guitarist is wont to do) and was taken to a small, unmarked dressing room where I was medically supervised by the Magic Cyclops (perhaps best known for his brilliant American Idol audition). While he wrapped some duct tape around my thumb like a man profoundly familiar with duct tape’s enchanted powers we were both suddenly, inexplicably, and simultaneously struck with a sense of dread. “Did you just get creeped out?” “Yeah, you?” “Yeech, yeah – let’s get out of here.” (Some weeks later I was speaking with a friend who used to work at the Regency and quite randomly she asked, “Did you know there is a hidden haunted dressing room backstage?”)

The best of the best spent the night out-besting each other before an undulating sea of foam fingers, devil horns, and deafening ovations. I know that sounds like contrived Rock journalism hyperbole but I offer this evidence to prove I’m not making this up. Here is my Round Two performance which I feel illustrates the kind of electricity in the room that night – jump directly to 1:40 to hear the noizzze. (Keep in mind, in the second round each of the top competitors must compete on-the-fly to a surprise song that is often edited in unexpected ways.)

But not only did I win the competition I also won the game where kids try to impress their folks. I passed the boss level and unlocked the Win sequence, never again having to play “Justify Your Life’s Choices To Your Parents”.

Winning this event, with this degree of fanfare, doing something that truly brought me such unbridled joy, checked a lot of boxes for my dad. Rock concert? Check. Comedy show? Check. Sporting event? Check. His son hoists the championship trophy and belt aloft while riding the shoulders of giants? Check.

As the crowd began to filter out I was stuck doing press on the far side of the venue. From out of nowhere my dad breaks the line and, to all the people waiting, holds up both middle fingers at them and yells, “Fuck you, that’s MY son!”

Things between us have been pretty cool ever since.

So it seems fitting that I use this month’s column to bring in some of my air guitar friends, since air guitar was “instrumental” in helping my dad and I reach a higher level of mutual understanding and respect. Plus, even well after I stopped competing he remained a staunch supporter of the Bay Area air guitar scene. So here, please check out a sampling of what competitive air guitarists do in the off-season:

Bonus cut:
About a year ago, when my dad was wrecked from a particularly painful radiation treatment and was unconscious in my living room, I put on Love’s Forever Changes LP to fill the silence. When from a deep stupor he suddenly cracked open one eye and managed to eek out “I saw Love at The Whiskey in 1969,” and proceeded to tell me all about the night. So I made this song/video of my second-favorite *Love song* for his birthday last year: