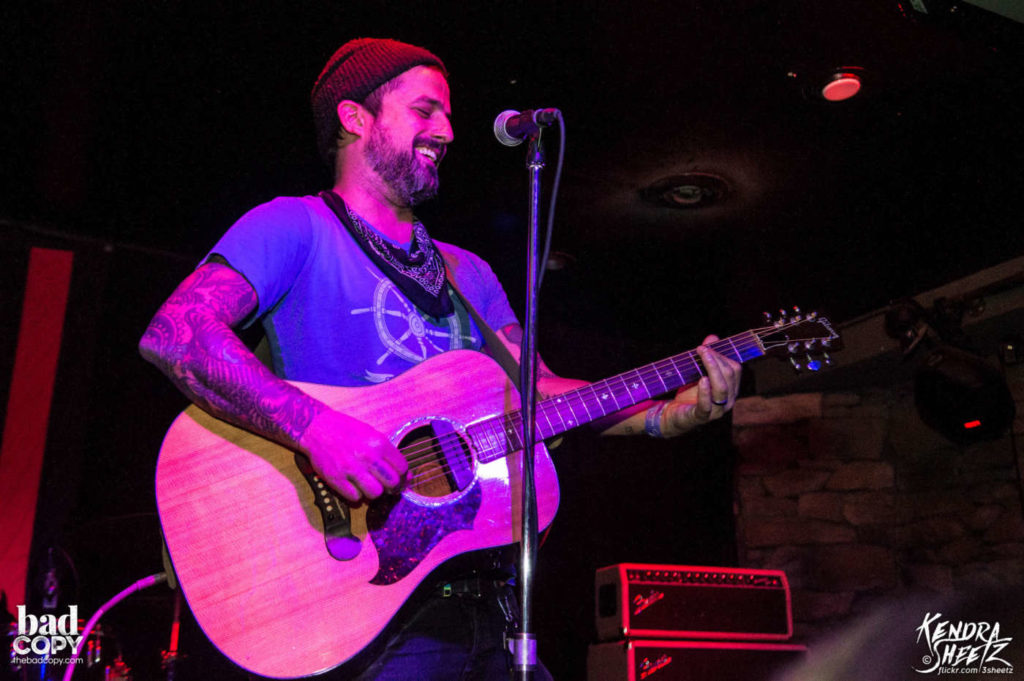 When I took a first listen to Brendan Kelly and the Wandering Birds’ new album, Keep Walkin’ Pal, I was floored. It was like nothing else that he’s ever released before and also nothing like anything I would have ever expected. So I sat down with Brendan over drinks and talked all things Wandering Birds.

Keep Walkin’ Pal will be officially released on Black Friday (11/23) but you can grab an advanced copy if you’re Festing this weekend in Gainesville. You can read Part 2 of the interview now! Also, if you’re heading to Fest, check out The Lawrence Arms‘ set on Saturday the 27th at Bo Diddley Plaza at 8:30PM. Brendan also will be playing an acoustic solo set on Sunday the 28th at High Dive at 2:30PM.

First of all, the new album is absolutely wild. It’s nothing like the first album and I don’t think that it’s anything like anything you’ve put out before musically or creatively.

It totally is surprising.

There are a few songs on here that fans of your acoustic sets will be familiar with like “Huggz” and “The Ballad of Buffalo Bill.” We’ve been hearing those live for awhile. But they sound absolutely different on the album.

It seems like you’re really creatively stretching yourself on the album. How are you planning to emulate all of this live?

I don’t think that’s an option. I don’t want to get into how dope I think my own record is. Although, I do think it’s dope. You should all buy it. It comes out on Black Friday *laughs* But the truth of the matter is that the record is its own experience and I think that what it’s selling is a style and attitude.

First, there’s the pragmatic consideration which is like, “this band isn’t very popular.” So I would have to hire like six musicians to do this live in a way to approximate what’s on the record. And make no money. And I can’t afford to do that. I’ve got kids and a house and a job that I’d be leaving.

Another thing I could do is do it with a kind of a stripped down skeleton crew and just be like, “Well, its not gonna sound anything like that shit. Here we go.” And the other thing is that I could just like sell the attitude and do it myself acoustically. And I think that until some fucking Netflix special makes one of theses songs their theme song, we’re gonna have to deal with those two options.

I’ll do as much as anybody wants. And if there’s a demand for it, I will put the band together that can do that exactly. I’m really proud of songs and the sound and I would love nothing more than to be out there making that sound every night. But, unfortunately, I don’t get to have the boots on the ground like I used to in the past in order to get a project up and running. It’s a little bit harder. So this is a bit more of an art project.

Speaking to that, somewhat, your live show lineup has changed since the last album, correct? Dan Tinkler is a solid member now?

Well, Dan Tinkler became a part of the band because he was engineering the record. It just got to a point where it was Nick and I. Dan was just such an integral part that I had him play the drums on one song and he played lead guitar on another song. And it was like “Dude you’re as much in this band as we are.”

This whole thing isn’t like a group of dudes standing around practicing. It’s me writing them, talking to Nick about arrangements, and then Dan taking those arrangements and then putting them together. It’s less of a band and more of a collective. Dan is absolutely part of that collective. You know, the core foundation of the Wandering Birds is me and Nick, but Dan is right in there. He is a member of the band.

We’ve talked about this before in other interviews, about how you come to the song writing process. What differentiates a Wandering Birds from a Falcon from a The Lawrence Arms song. It seems like, with this more than the other two, you’re selling sort of a brand, almost like a specific persona or tone.

Well not a brand, per say. But a tone? It seems like I could almost maybe lump the other two projects together. But this one is so far removed from the others that it has a completely different tone than the others.

Yes. Absolutely. So Nick is my oldest friend. When I was like eleven, Nick had a four track and bass and we would make songs. He would play the bass, play the guitar, and we would make music, and I would sing over it. All through high school we would do this stuff. We’d just take drugs and put on the four track. Chris was part of this for a very long time as well. I don’t want to minimize his part of all this. But Nick and I have always had this sort of sound in our heads. Right? So this is the record I’ve been trying to make since I was like eleven years old.

The first time I played it for somebody, it was my friend Dave who I love and respect very much. I got the distinct impression that he fucking hated it and I was like, “Don’t care. Still love the record!” This one is more like something I really wanted to do that really needed to come out. But no, I’m not trying to sell and brand or persona with this, although I know I did use those terms earlier.

What I mean by that is, I think what you take out of it is a more fundamental core kind of thing. It’s the same thing with the first record. Nobody has asked me to bring the Wandering Birds around and play a version of that album on their stage. But I come acoustic and people want to hear those songs. What it offers is something different and I think that this cashes the check that that record wrote. This is the real Wandering Birds. That one still has its tone but it had its toes in other stuff. It was like “Look this is going to be weird. But there’s still enough stuff here that’s punk influenced that you can come along.”

Do you specifically come at the song writing process and topics differently for each project that you’re part of?

The way I approach it differently is that this is very much less tethered to anything. I feel like there is sort of a freedom to do whatever the fuck I want.

Interesting. I have a theory as I was going through the album and comparing it – if you even can – to both your other projects and the first album. My theory is that TLA is your public speaking voice that is well-known and everyone is used to. The Falcon is kind of like you during or after a crazy drunken weekend. And Wandering Birds is like you on a psychedelic bender.

*laughs* Well, I don’t hate that. The objectives that I’m trying to achieve are different. There’s no rage and any malaise is sort of tempered with a glaze of pills or something. Which isn’t to say that I don’t think it’s an emotional record. There’s some very emotional stuff on there. It’s a different aspect.

*laughs* This is some classic me talking too much but here it goes. You know there’s all this talk about what it means to be a man and about masculinity and all that kind of shit. I mean, I’m obviously a big, stupid, oafish man. There’s no way around it. No one is gonna look at me and say, “He’s not a big, stupid, oafish man.” But, in my own little way, I’ve wanted to subvert those ideas with the idea of The Lawrence Arms being like a slightly more thoughtful band than it appears or with The Falcon almost being a hardcore band that is either so over the top that it’s satire or becomes so sensitive that it’s embarrassing. Right?

And with this, I think of it like… Punk Rock is so puritanical, in general, right? Especially if you want to talk about ‘Punk Rock saved my life’ or ‘Punk Rock pushes the envelope.’ Punk Rock is also like PRETTY into white dudes and gender norms and self censorship. It’s the worst of the Left and the worst of the Right all combined into one scene. And this record, not being a punk rock record, there’s sort of a freedom to eschew that thing entirely and just be an artist…and I’m fully aware of how dumb that sounds.

This song is one of the clear frontrunners of the album. It’s so fucking catchy. And I’ve had more tequila in the last two weeks (since I first heard the song) than I’ve had in the past three years of my life because of this stupid fucking song.

Beautiful! This song is stupid as shit, don’t get me wrong.

It’s clear you’ve got some crazy marketing skills. Besides the obvious topic similarities, were you planning on writing a punk “Margaritaville” where you hate it but you love it, and it’s stupid but it’s so fun, and goddamn if you don’t wake up every morning with that goddamn song in your head every day for two weeks after slugging down tequila every night?

*Laughs* So I was riding with Nick out to his mom’s house in Michigan and he said, “Man, I can’t wait ’til we get out of these woods. We can stop someplace and get a shitty margarita.”

And I was like, “Did you just say SHITTY MARGARITA?? That’s a song, like a Cheech and Chong song from some 80s movie.” And right then I was like, “Wake up in the morning and my head is feeling rough. Drink a shitty margarita…” I wrote the whole song sitting shotgun in the car. Every bit of it was done except for the bridge, you know the emotionally resonate part (I’m using finger quotes) and that was the only thing I added. But everything else was completely written in that car and were cracking up. And then we went and had some VERY, very shitty margaritas, so it was terrific.

Somebody pointed this out to me, which I never thought of. I’m gonna be getting handed terrible margaritas for the rest of my life. *Laughs* and I’m gonna have another song “Shitty Diabetes.”