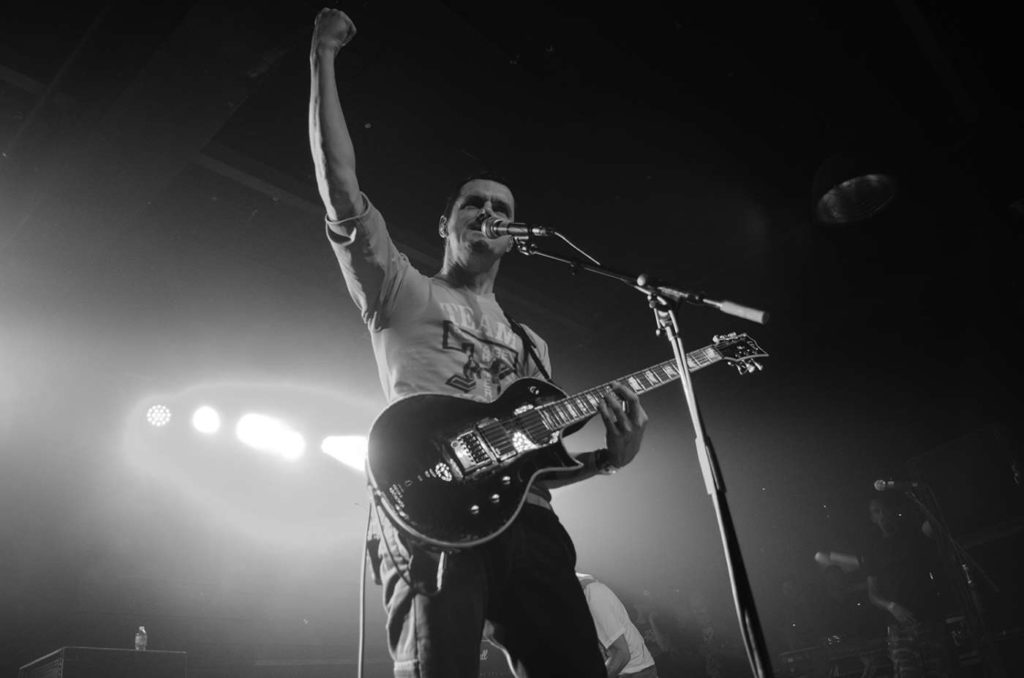 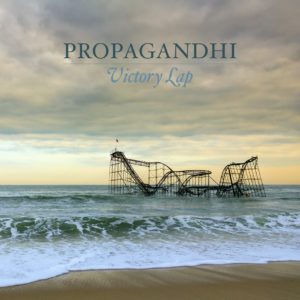 Seven. Propagandhi has written seven goddamn albums and each one still manages to eclipse the last. Who does that? Most of their Epi-Fat contemporaries who are still churning out records have taken a steep decline in quality by now (*cough* Rancid *cough*). But, here we are with Victory Lap, an album that manages to exceed the already excessive expectations I place on Propagandhi records when I blindly pre-order them without hearing a single note beforehand.

I’ve been sitting with this album for about a week and, in that time, it has completely disrupted my work flow. The more I listen to it, the more that’s all I want to do. As soon as the opening riff of the title track begins chugging along, I am immersed within an exhilarating world shaped by a group of pissed off, hyper-talented musicians with an acid tongue utilizing biting allegory and dark humor to craft a scathing critique of contemporary society. It’s fucking brilliant and the best time you’ll have with a punk record in 2017.

Propagandhi’s transition from a snotty, quasi political skate punk band to a snotty, politically charged thrash metal punk band has been one of my favorite decisions by them. While the pace in which they release material can be best be described as ‘glacial’, the result is always worth the wait. As with every album before, Victory Lap is the best Propagandhi has sounded. The 80’s metal influenced riffage that has driven the band’s sound over the years is back in full force and tastier than ever. What I love about the songs on this album is the way the rhythm includes bombastic drums paired with bass which all over the board. All the while, one guitar is driving towards a cliff played over melodic chords creating a sense of two versions of the same song layered on top of one another that somehow functions in perfect harmony. This style can be found on “Letter to a Young Anus” among other tracks. Much of this can be attributed to newest member and self proclaimed raging vegan Hispanic lesbian, Sulynn Hago. Her musical influence is wonderful. She pushed the band to take risks with songs like “Comply/Resist,” “Call Before You Dig,” or “Lower Order” (have fun singing along to that refrain) pay off in dividends with some of the best thrash-laden satire from Propagandhi to date.

Todd does the most amazing Chris Hannah impression this time around. It fooled me for several days before a friend assured me there were (sadly only) two Todd songs. After learning that and going back, I can’t believe I didn’t catch it sooner. Unlike his songs on Failed States or Supporting Caste, which were obviously Todd, these tracks blend in so seamlessly with the rest of the album that it becomes a greater effort to discern them. The jazzy, Mike Patton-esque structure of the riffs on “Nigrendo” have his fingerprints all over them.  And “When All Your Fears Collide” is way too rooted in 80’s hardcore to not be a Todd song. I don’t know whether it’s the production on his vocals or if Chris taught him how to sing since 2012, but I was elated to discover that I was initially too dumb to tell the difference between their vocals this time around.

Closing out the record are two of the strongest songs now in Propagandhi’s catalog. The strength of “Tartuffe” lies in the band willing to turn the knife back around on themselves as they dismantle their role as privileged white men, call out those who can’t, then invite single moms to the front and dead beat dads to the back because fuck you, they said so. This is their stage and Propagandhi has never had a high tolerance for idiocy when they came to rock. If the best art is meant to upset you and make you think, then “Adventures in Zoochosis” is the god damn Mona Lisa on this record. Bright guitars dance around as splashy cymbals echoing the sound of children playing transitions into President Dipshit and his infamous tape from Billy Bush Weekend followed by his nonsense about building a stupid fucking wall. This little emotional roller coaster sets the tone perfectly for the subsequent story told from the perspective of captive slave coming to terms with his place in the world he is bound. It’s clear that having children has influenced Hannah’s outlook on the future of the world in which they’ll grow up; the sense of hope he sees in them is reflected most in this song. The guitar licks, the story arc, the break down, all of it adds up to one of the most satisfying emotional payoffs one could ask for from a song.

If you were wondering if there were still plenty of obscure political and potentially alienating references, well you are in luck because that would just be silly to expect anything less from Propagandhi. Where Failed States seemed to occasionally come up short in that department in favor of accessibility, Victory Lap bites back and invites you to strap in and do your best to keep up. Thankfully, at no point does not getting the reference to a 17th century play about a deceitful fool or a 25 year-old Christopher Hitchens article hurt your ability to enjoy the album. The music on display is a marvel on its own and is sure to pull in a new audience who only listen to the heaviest of metals. Get ready to hear about these sick riffs from all your metal friends you’ve been trying to convince them to listen to in the first place. Who knows? Maybe they’ll finally learn something along the way.

As Propagandhi continues to push themselves to be better and better at what they do, one has to wonder how they are going to top themselves this time. No band at this stage in their career has any business releasing an album as good as Victory Lap.  But here’s Propagandhi going about it like it’s a damn cake walk. I don’t know what we did to deserve this band, but I’m sure glad they’re around.