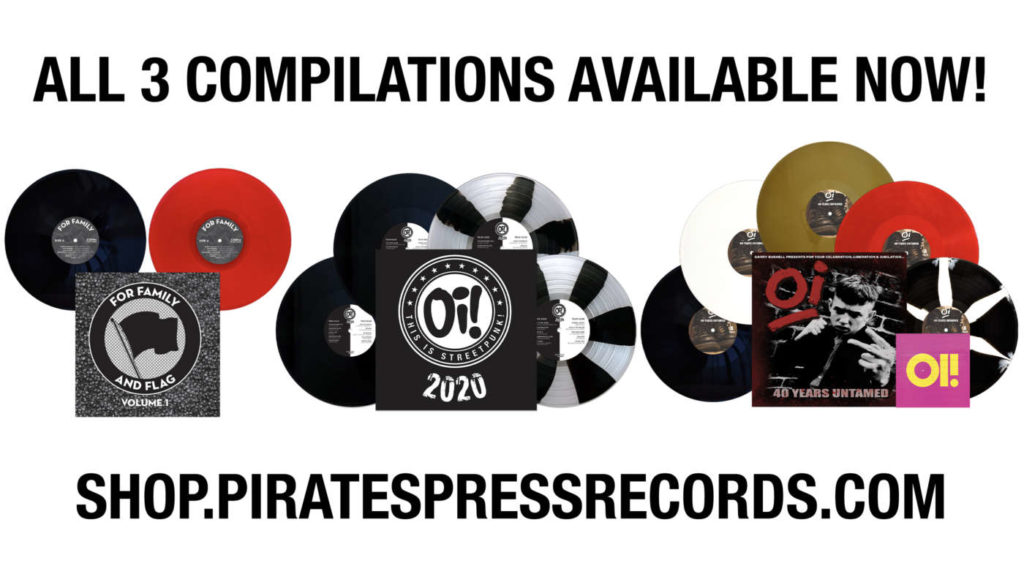 “Oi wasn’t about fashions or hair-cuts or dodgy politics. Oi was the reality of punk mythology. It was the sound of the backstreets, of untamed hooligan youth carving out their own future in a system where the odds were stacked against them.”

It is with this ethos that Pirates Press Records is ending 2020 with a handful of releases including two compilations marking the fortieth anniversary of Garry Bushell’s famous compilation Oi! the Album back in 1980 which solidified the moniker for the Oi! style of music. These complete an end of year trifecta of compilations with the release of For Family and Flag Vol. 1 which came out in early November of this year.

The first compilation, which was released on November 27th, entitled Oi! This Is Streetpunk 2020 features the present and future of what Oi! is all about; a celebration of the power and longevity of this scene as a way of life and more than just a fashion style or genre of music.

“These bands’ respect for the roots of this scene, and the passion that they lead with is what constantly fuels the scene and provides its future,” says Pirates Press.

The compilation features 20 of the best Oi! and Streetpunk artists from around the world including Antagonizers ATL, Lion’s Law, Bonecrusher, 45 Adapters, and more. The compilation is pressed in the form of two 10” records and includes a 20” x 20” poster.

For the second complication, Pirates Press teamed up with Garry Bushell himself to present Oi! 40 Years Untamed which comes out December 11th.

“I saw Oi as Springsteen’s lyrics come true – ‘the hungry and the hunted explode in rock ’n’ roll bands’. It was fresh and exhilarating. That’s why I put the first Oi sampler together.”

This hard-hitting collection features exclusive, unheard songs from the Oi pioneers like Cock Sparrer, Cockney Rejects, The Last Resort, and The Business, along with original tracks from younger, up-and-coming bands from around the world such as Bishops Green, The Old Firm Casuals, The Drowns, and Stomper 98. This release is coming out on CD and 12” and comes with a 4″ vinyl sticker.

For full track listings and details on all three releases, head over to their website.