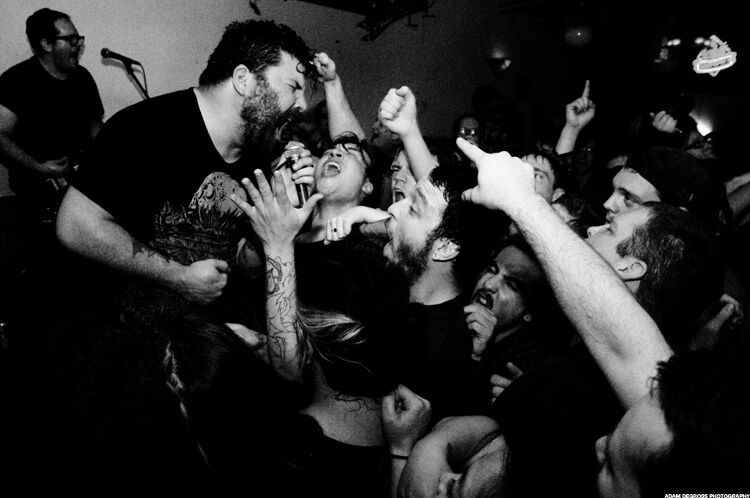 Iron Chic is a magical band to me, and it’s been that way since I first heard them. They are a bombastically loud band that musically crafts epically dense soundscapes, layered with noise and feedback and weirdness, but also rooted in the best / most feel-good chord progressions that Rock and Roll has ever conjured up. Jason Lubrano, Iron Chic’s singer, pens his lyrics for all of human-kind, capturing the painfully beautiful thing that it is to be alive on this earth: grief, bullshit, love, anxiety, loss, repeat. “It aint heavy. It aint heaven.” On the eve of the release of Iron Chic’s new record You can’t Stay Here, I had a chance to talk to Lubrano on the phone one Day 1 of their Fall tour, and here’s what we talked about:

So here you are, Iron Chic has been a band for ten years. You’ve done all the stuff. You’ve been to all of the countries. You Can’t Stay Here is your third full length, so you’ve done that a bunch of times. Today is your first day of tour and your new record comes out Friday. Is there something about this time around that you’re specifically stoked on?

I mean, it took us a while, and we had a lot of setbacks on the way so it just felt good to get it done and finally be able to get it into people’s hands and see all the stuff that comes from having a new record. It’s been five years in the making or whatever so that was kind of exciting. I like all aspects of being in the band but that’s what was particularly fulfilling.

Why did it take so long to make this record?

Basically it was that there were things going on with Rob before he passed and he ended up leaving the band. And we were working on replacing him and that was like right when we really first started sitting down to write this record, that all happened. And then we were trying to get our shit together and do it again (sit down to write the record) and that’s when we found out he had passed. So that really just put a nail in the tire for a bit you know, creatively, and then obviously it took us a while to recover from that and get our bearings back and be able to be in a place to start writing again.

Yeah. I can’t imagine having to hit the mental reset button like that after processing all of that stuff and get back to making a record. Recording a record is fucking impossible anyways.

Yeah. It takes a mental toll to begin with.

There’s all kinds of themes within Iron Chic records that I love to see show back up again. In “Let’s Get Dangerous” there’s an allusion to getting caught in the “loop that never ends” again. What are you writing about when you talk about this loop? Is this reincarnation? Is it a time loop?

I wouldn’t say so much reincarnation as just, you know, the idea that everything is sort of cyclical, be it history or on more of a cosmic scale. Destruction and rebirth or whatever. However it fits to you is the way that I want you to understand it. But yeah, when I say it I kind of mean like time looping in on itself over and over again.

For sure. That makes sense. And that’s the thing. When you listen to other people’s songs they become yours. I definitely put all of my own personal hopes and fears into the music that I listen to, like it applies directly to me. On a similar note, “Ruinous Calamity” is a cool fucking song out of nowhere at the end of this record. It’s a cool curve ball that I like a lot.

Again, I’m projecting here, trying to figure out if you’ve been writing about reincarnation this whole time. With your line “this is all that I am, and all that I will be again” we’re back to that cycle thing.

Yeah I mean, if you like to take it that way I think that’s a perfectly acceptable view to take. It’s not necessarily the exact intent but, like I said, I try and leave it open for people to hang their stuff on it. It’s mostly just about introspection, taking stock of who you are and what you’re doing at any given time.

It’s weird how your lyrics force you to do that while you’re listening to the songs. They will snap you out of your stupid mundane “I have to go get coffee and go to work” existence and make you think about what’s around you. Do you use song writing as a coping mechanism? A lot of these songs are about anxiety, at least they are to me. Is that something that you use songwriting to get through?

Yeah, I’d say for sure. It’s definitely a cathartic experience, I think for all of us, and maybe me especially because I can do it in the form of words. Even if it’s vague or, you know, a metaphor or whatever it is, it’s nice to get some of that stuff out of my body and into the world and hopefully it’ll do something better out there than it will inside me.

The dichotomy of your lyrics up against the soundscape that is the musical elements of Iron Chic is really interesting, especially with this record. I don’t know if your lyrics got darker or if that’s just me projecting onto your lyrics but it seems like this record is… it doesn’t have the happy uptick at the end, if that makes any sense.

Absolutely. It wasn’t really by design. I sort of noticed at some point in the writing process that it was kind of happening. At one point, I was trying to think if I should purposefully counteract that. But it just felt like something that felt right at the time so we just kind of ran with the idea of it being more of a straight up depressing lyrically record. It just didn’t seem like it was the same thing as the other records. (On past records) I would generally do that on purpose, like, write the uplifting part to counteract the depressing stuff because, you know, that is life. Some of it’s depressing and some of it’s not. I don’t necessarily want it to be negative energy all of the time. But I guess we were all collectively in a darker place and I was personally in a darker place. So it kind of just came out that way and I just let it flow to see how it would turn out.

These dark lyrics live really well up against this music because it is like it creates an entire atmosphere. Whenever you start an Iron Chic record, it begins with swelling noise and sounds and it is ultimately beautiful but it gets messy and weird too at the same time. I think that’s why it feels so emotional to me when I listen to it. It’s just like an entire tapestry of what it’s like to be a human living on our planet and just like, asking yourself ”what the fuck is this thing?”

I appreciate that. I mean, that’s kind of what we’re going for, you know It’s like, I want everyone to be able to relate to the songs no matter where they come from or where they are in life, and those are the kinds of things that seem universally relatable.

Very cool. Well, I think that’s all I had for you, man. I did have one question just for my own personal curiosity mostly because I haven’t seen the liner notes yet. Did you get Erica Freas to sing on this record again?

Oh, no no it’s actually Carly Comando from Slingshot Dakota. She came down to do some vocals and there’s a little bit of keyboards on there too that she did.

That’s awesome. Well, cool. Fucking congrats dude. The record is really great. Have a good tour and I’ll see you in Pittsburgh when you come through.