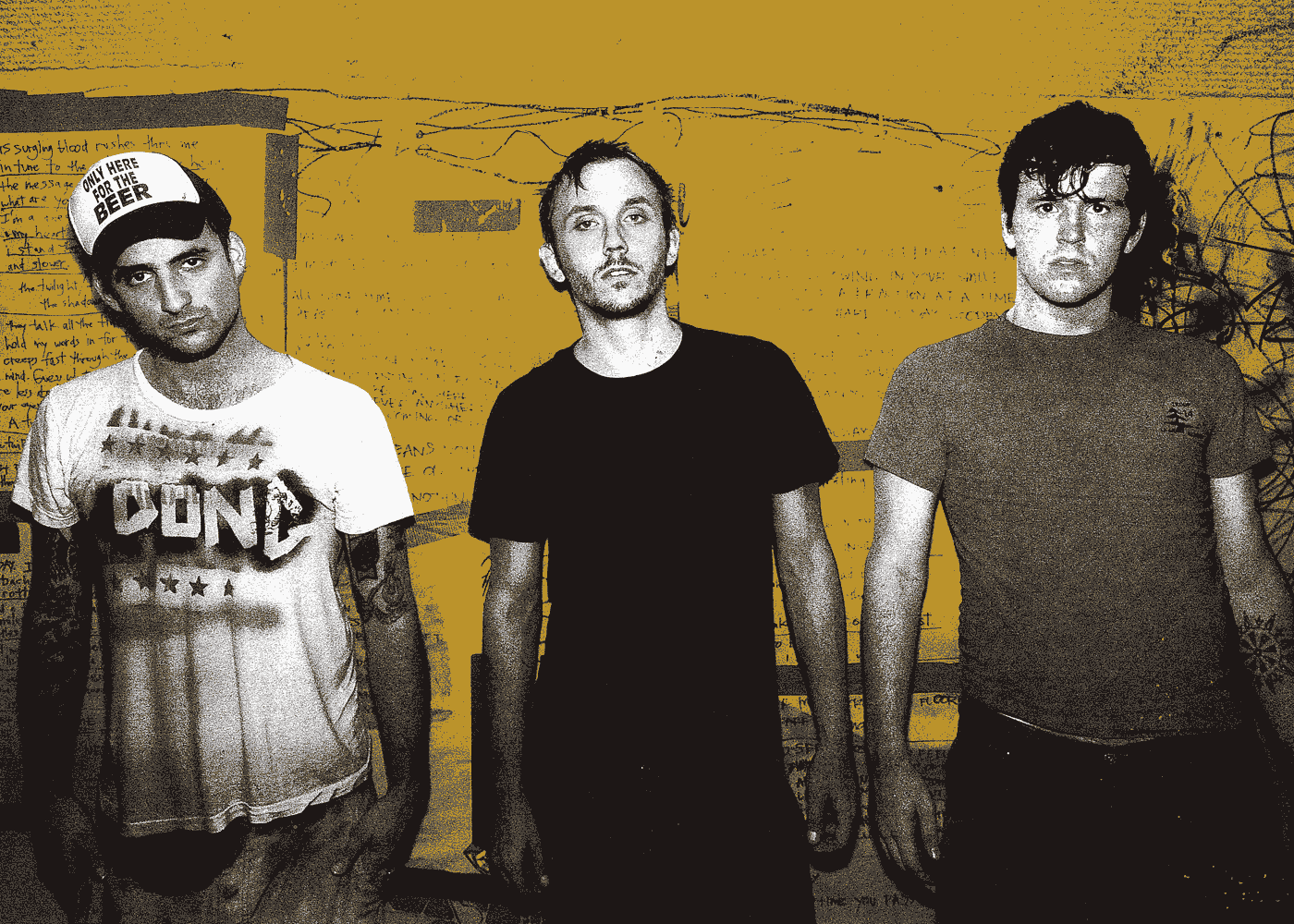 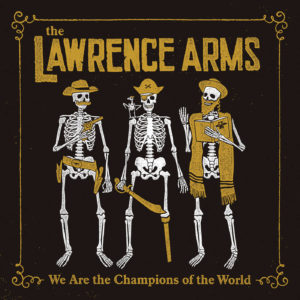 We Are the Champions of the World

Here at Bad Copy, we receive a lot of album review requests every week. Sometimes they sit on our reviews list forever. Sometimes our contributors forget to review the album they signed up for months ago. Sometimes we will actually discover our new favorite band. One thing is certain – not a single one of these bands would dare send us a brand new album with 29 tracks on it… until now. That’s pretty ambitious for a group that’s been around for almost 20 years, let alone some Midwest trio that no one’s ever heard of. But, I mean, we liked the gall of these guys. So both Kevin and Kendra decided to tag team this two disc album, entitled We are the Champions of the World, by some band called The Lawrence Arms out of Chicago.

First things first, let’s address that album title. It’s a little lofty for some run-of-the-mill Chicago orgcore band’s first attempt. You could put out six full-length studio albums, a handful of EPs, and a B-Side compilation before you could even CONSIDER referring to yourself a ‘champion of the world.’ Also, you’re not fucking Rancid. You don’t need to have 29 eclectic tracks of varying recording and mixing qualities of every single goddamned thing you recorded in the studio during your first go around. It’s 2018; people’s attention spans are very limited. But, we get it. These Arms dudes are excited to put out their debut album and they spent all their money to have Matty Punk Rock or whoever record their demos for realsies. But I mean, could you imagine going to a show for a band that would play this many songs? They would need to headline their own sort of mini-fest for, like, three consecutive days just to get all the good ones in! But whatever. We’re not here to give career advice to newb musicians.

We are the Champions of the World opens with “On With the Show,” a raging fast punk rock song with a sound reminiscent of 2003 that would make None More Black proud. It is a song with the greatest of stories to tell, and one of the only non-ICP songs we could think of that references Juggalos. Unfortunately, it’s hard to get past the singer constantly repeating “telephone” over and over. I mean, it’s called a CELLphone, dude. “Great Lakes/Great Escape” introduces us to the second way sadder singer of this band, as he trades off vocals with the Dillinger Four sounding guy. I’m pretty sure this song is about shopping for some new patio furniture at The Great Escape, but it’s hard to really be certain with confusing lyrics like “I used to paint myself with cinnamon” and “Fuck condensation history.”

“100 Resolutions” sees Sad Singer taking over lead vocal duties on a more uplifting song. This track has the potential of becoming a drunk punk New Year’s Eve anthem. I mean, it’s easy to image all the brainless punk kids sharing this on Facebook every single December 31st, emphasizing the “this is my year for sure” lyric. Then, the tone of the album suddenly takes a weird turn when we arrive at “Beautiful Things.” We can’t pinpoint what exactly happened here, but it sounds like the Lawrence Arms have aged twelve fucking years. The youth and recklessness is gone and is replaced with kids, bank loans, and mortgages.

And just as quickly as they aged, things return to normal with the upbeat sounding “Quincentuple Your Money” – although you can tell they wrote this song basically begging for radio play. Speaking of the radio (waves), “The Slowest Drink at the Saddest Bar” is a solid track. It’s got that certain familiarity of a piece written after a band’s three year absence, almost as if to say to the world “yo, we still got it!” The Lawrence Arms nail that feeling mid-record. Wait. Sorry, I mean mid-record on a normal length album. “Are You There, Margaret? It’s Me God” is a clever play on the title of the 1970s childhood classic. I like when my punk bands can show they’re well-read and cultured. But, this feels a tad cheap. Maybe throw a little Bulgakov in there or a reference to some off Broadway avante garde revue. Even a quick quip about Maury Povich viewers would class up the record a bit.

“Seventeener (17th and 37th)” brings us back to that weird ‘woe is me – I’m old’ theme from earlier. Maybe this is some sort of Godfather II-esque time jumping concept album, about a young punk growing up and reminiscing on his past. They did mention New Years Eve again, so it’s very plausible. “Rambling Boys of Pleasure” sounds like a tattoo you’d regret in the future in song form, but I mean I don’t hate it. I don’t hate it. And then we have “Light Breathing (Me and Martha Plimpton in a Fancy Elevator),” which sees a huge dip in the recording quality. Knowing that bands often record out of order, we can assume this was one of the last tracks recorded and they either had to use the demo, or ran out of money to properly mix it… probably because the record has so many fucking songs.

In “You are Here,” Sad Singer sings “the words don’t come to me so easily.” But we are only halfway through this opus, so we’re thinking maybe they do. “Turnstiles” is where the Org meets the Core. The song pays tribute to Hot Water Music, the pioneer of the genre, and their own track “Turnstile” by sneaking in HWM’s lyric “I must always remember/ there’s no point to surrender.” One of the stand out songs on the album is “Demons” and it’s the purest example of art imitating life. I mean, at least our lives. The content of the first verse sounds exactly like every single wedding we’ve ever been to; it’s fucking spooky. It also sounds like the NMB singer knows how to fucking party. So hit us up, dude, and we’ll rage at the next nuptials!

The last five or so songs of the album seem almost like afterthoughts, like they could have been scrapped for time. But I mean it seems like cutting tracks isn’t really an option for The Lawrence Arms. “Catalog” rips, as does “Black Snow,” the Sad Singer compliment to “Catalog”. It reminds me of another song called “Black Teeth” by this other band I heard a couple years ago, Falcon. The two songs sound almost nothing alike, except maybe for the drums. “Laugh Out Loud” could have been cut and locked away for over a decade and we wouldn’t have been mad. Finally, “Warped Summer Extravaganza (Turbo Excellent)” closes the album. We discussed it and agree that as the final track, it may have been a better choice to slow the song down. They could have played around with it and added a little country twang or something. But, whatever. It serves its purpose to remind everyone that The Lawrence Arms is a punk band.

Despite being all over the map as far as tempo, sound, band talent, and the mixing of the actual tracks, We Are the Champions of the World is a pretty wild ride for being the band’s debut release. I mean honestly, with some time and practice, The Lawrence Arms could become a real staple of the Chicago punk scene. Then again, they may just end up getting overshadowed by the countless number of other bands in this city that are emulating this exact sound. But maybe – just maybe – this band will gain some steam somewhere down the road. They could gain a cult following of bearded PBR drinking dudes, split up for a little bit so the members can all focus on various side projects and their personal lives, and someday in the distant future they may put out a greatest hits album… but it’s likely most of these songs wouldn’t be on it.

We Are the Champions of the World gets 29 out of a more more aesthetically pleasing 30.

ALMOST APRILS FOOLS, FUCKERS! Of course we know The Lawrence Arms! Now go buy We Are the Champions of the World and make these guys richer than Elon Musk! And we will see you at their sold out Chicago show at Metro on April 11th with Banner Pilot and Sincere Engineer!