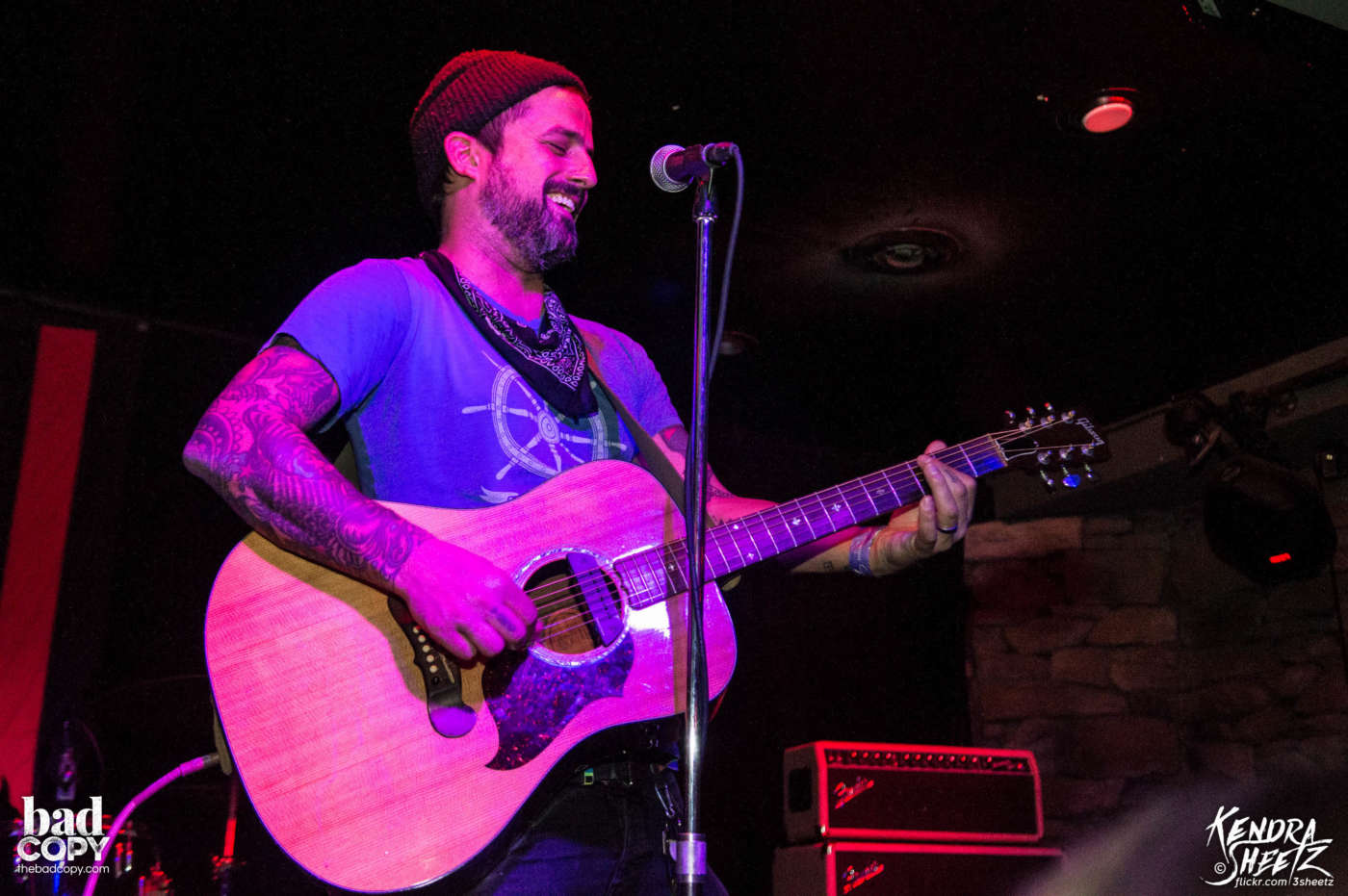 "There will be more music and more touring"

At the end of March, The Lawrence Arms‘ released a Greatest Hits album, entitled We are the Champions of the World, on Fat Wreck Chords. I sat down with Brendan Kelly to talk about the new record at our normal go-to interview spot – The Gman Tavern in Chicago’s Lakeview neighborhood. As drag queens and fans took over the back room to watch and celebrate RuPaul’s Drag Race, we headed downstairs and posted up in the liquor cage to chat about the new(?) album, his personal creative writing processes, songs that the band no longer plays, and what’s next for TLA.

Like every interview I’ve conducted with Brendan, we covered so much ground here that it renders itself a two part read. Check back tomorrow for the conclusion to the interview were we discuss literature, broadening prospectives outside of the white cis male guidelines, and what we would do for a sip of some original recipe Sparks.

Let’s start with the basics. Why a greatest hits album and why now?

Fat Mike hit me up and was like, “Hey man, we think of you as part of the Fat Wreck Chords family. What do you think about doing a greatest hits record on Fat?”

And I said “… WORD? For real?” *laughs* What I took from our conversation – and maybe he never said this, but I think he did – is that the way that people get music nowadays has changed. They go to Spotify and if you’ve got a greatest hits record, then they’re hearing the indicative songs of your band.

It just made sense. I love Fat, we all love Fat.  Plus it was a really easy way to do something that was pretty cool.

Were there any issues with getting the Metropole songs from Epitaph to cross over to the hits album on Fat?

You know I wondered about that myself, but there were no real hitches. I think at this point, because music becomes free the moment that it releases. Those licensing issues aren’t the same as they used to be. That’s the thing about this release. We’ve got the coolest record we’ve ever made and we didn’t have to do anything to get it.

Can you explain the process of choosing songs for a greatest hits album when, by all intents and purposes, you don’t have “radio songs”?

The first thing to consider is that a lot of people would say “Oh, The Lawrence Arms greatest hits is just The Greatest Story Ever Told or it’s Oh! Calcutta!” Right? But if we put the seven best songs from one of those records on this, all of a sudden the context of those songs is lost. The record becomes useless and the whole thing is fucked.

So we decided to approach it from more of a retrospective. I picked songs that I thought were either fan favorites or were indicative of our sound at the time or of our evolution. Then three people on the Fat team who were familiar with our entire catalog voted.

So you were the primary driving force who decided what songs were going to make the cut?

Well, I think I’m just the quickest to answer emails. I made a list and sent it over to Neil and Chris for their approval. And I mean, we’ve all been to every Lawrence Arms show. *laughs* Then the three people at Fat voted and the songs that had the most votes made the cut.

The release of this album is accompanied by tour dates rendering the band more active than you have been in years. What’s next on the docket for The Lawrence Arms?

There will be more music and more touring. But we have always operated outside of a traditional timeline. I mean, we’ve never had like a wave we had to ride. We weren’t part of the emo scene or the garage scene. We were always fairly uncool and irrelevant. And as a result, we’ve always been able to make our own way.

When we are ready to do more stuff then we’re gonna do more stuff and then we’re gonna tour on it. That’s the ethos of the band. I think that that has hindered us in the past but ultimately has worked in our favor in the long term. Because we’re not beholding to any one scene and it’s more of a pleasant surprise when we put out records and go on tour.

When your kids were younger, did they have a sense of what you do? Did you try to explain to them the concept of touring and playing onstage?

My kids have come to see me play at Metro, and at the end of it I asked them, “Did you guys have fun?”

They were like “Yeah, that room in the back with all the candy is the coolest.” They’re still little kids; they don’t give a shit. They don’t understand the concept of how personal art and artists get with their fans and vice versa. They’re people who like things purely because they like things. They keep my head in the game as well.

So you’re like at home, messing around on the guitar and they’re like, “Dad shut up! We’re watching TV!”

That happens ALL the time. I’ve actually stopped playing guitar at my house because of that. I mean, they could really give two shits. I think they like that I do something kind of cool. Every once in awhile, someone will recognize me and they think that part is cool. But, that doesn’t happen very often *laughs* I don’t want to sound like some grandiose Paul Simon or something like that…

After all this time, is there a song or songs that you are just over playing night after night?

We have so many songs that we could use to fill those gaps. And, like I said, we’ve been to all The Lawrence Arms shows so we know how these songs go over.

I love that idea.

You know… Chris is actually the only one who has played every single show. I missed one in Nebraska due to car trouble. And Neil missed one in Germany because he had a really bad ear infection.

But people think they want to hear “Boatless Booze Cruise” and then we start playing it and people are like, “Nah, I’m not into that.” Trust me. I know what works in this scenario and what doesn’t.

I should also mention that we played all of those songs at the War on Xmas this last year. We’re still capable of playing them, but we just choose to cut out certain ones.

You keep yourself just about as active and busy as anyone can be between your day job, TLA, the Wandering Birds, The Falcon, other solo material, your twitter accounts… How do you keep your creative juices flowing?

The wide variety of things kind of tends to keep me on my toes. When I sit down to write something for Lawrence Arms for example, it’s not like I have some whimsical regimen where I’m like, “Oh, I think I’ll write a song. Hmm, what band would this be good for?” No. Right now I’m in the process of getting all the nonsense out so I can write the best Lawrence Arms record I can write.

If I do that every day, I will write probably five songs a day. For, every 20 I write… no, not even. For every 40 I write, maybe there’s one that’s good. And when I’m done with that, I try to let myself not be creative, to just sit there and enjoy the more bureaucratic aspects of what I have to do. Like talking to people about going on tour and the album art.

I feel like when you’re creative, you need to constantly create. But there’s no shame in stopping until you feel ready to do that again. You just have to know when you stop. I’m going to use such a typical Brendan Kelly analogy… It’s like if you’re super wasted and you’re jerking off. At a certain point, you’re like “Alright, that’s as good as I can do” and you just have to stop.