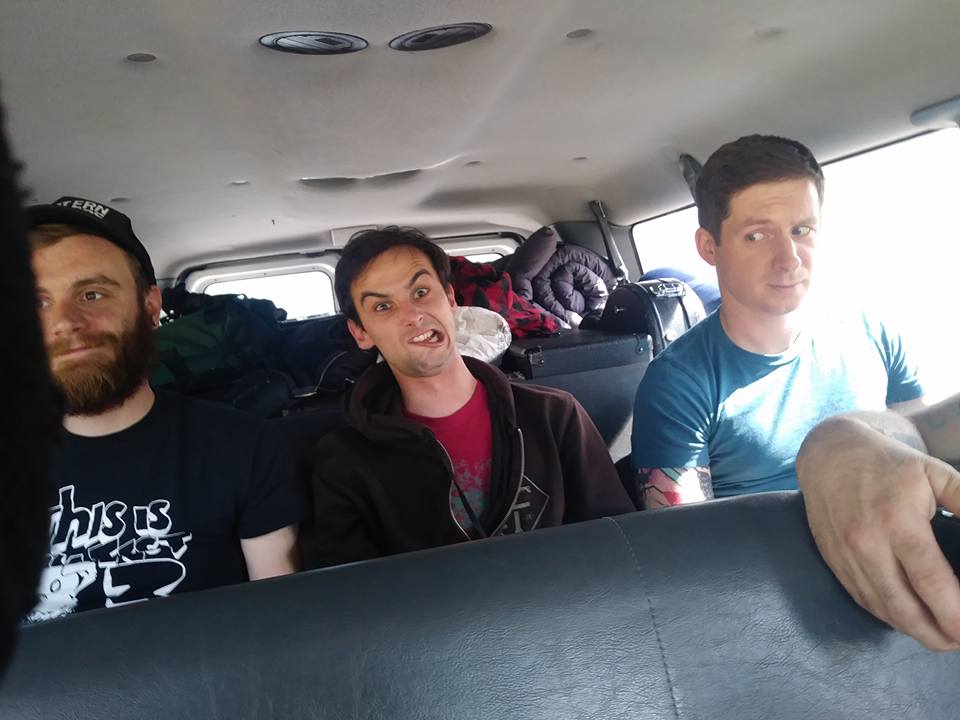 Oakland’s This is My Fest is coming up fast, starting next week! We wanted to do something to help celebrate one of our favorite West Coast DIY fests. So every Tuesday and Thursday, we have been releasing an interview with one of the bands who will be playing TIM Fest this year. Want to know where The Decline loves to play when they’re on tour in the Bay? We’ve got that. Want to know if The Copyrights think NorCal or SoCal has the best burritos in California? We’ve got that. Want to know what Danzig’s fondest punk house moment was? We… well we don’t have that. But we’ve got other cool shit you’ll probably also like.

We chatted with The Hammerbombs (Rob, Ilya, Jen, and Matt) and False Positives (Kevin, Dan, and Chris) while they were all on tour together last month. Kevin helped organize all of the van comment chaos into summaries. Also, Dan, Kevin and Ilya all also TIM Fest organizers!

Where do you prefer to play shows between San Francisco and Oakland and why? 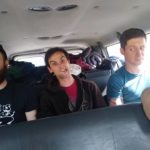 Kevin: Oakland! When setting up shows, it’s almost always for a touring band. Since Oakland is where we draw better, that’s where we prefer. But, there are some great places to play in both.

For Oakland, everyone was pretty much in agreement that Eli’s was our favorite. It’s now clean, sounds good, and the death urinal is now gone. Great food, especially Totchos (editor’s note: tater tot nachos, ya’ll!). The owners and staff are amazing. It’s nicer now, visually, but still has the punk mentality. And it’s a place where a lot of people already hang out. Golden Bull and Uptown are also super fun to play too.

Ilya (sarcastically): The bathroom at Gilman.

Kevin: As for San Francisco…

Rob: The Eagle in SF is the best place to play. It is a gay bar that has a Thursday punk rock show every week. They do shows other nights, but Thursday is the main night. Doug, an old school Bay Area musician, puts these together. The bands are always awesome.They have a killer beer selection and everyone is super welcoming and nice all the time.

Kevin: Thee Parkside is also a fun venue to play, but it’s a bit far away and it can be a bit hard to get a show there.

Kevin: This one was a bit tough. Between the seven of us, I think every single band on the lineup was shouted out. But here are a few that my voice recorder picked up.

Chris: The Copyrights, Tiltwheel, and Kicker.

Kevin: Can someone just pull up the list of bands playing and I’ll just put every single one? Horror Squad for sure. I’m really excited for Secondaries, as I don’t know they’ve been up here yet. And The Copyrights are one of my favorite bands, so can’t wait for that. Bands that play locally every year are really fun to see in a bigger setting, getting to open for some bigger bands too.

Matt: That’s not even a question. I’m offended. One is good and the other is ammunition.

Jen: Foil! And if you give a burrito to Will (Castro from Western Settings), just make sure there’s a lot of rice in it. But if you go any farther North then Stockton, you won’t find a decent burrito…

Chris: …But then you’d be in Stockton. I’d eat a burrito from SoCal or NorCal. They’re both fine.

The entire group agrees: We don’t really care if it’s NorCal or SoCal, as long as it’s not from Oregon.

What is your best TIM Fest story from previous years?

Ilya: Breathing in the bathroom dust from 1987 from on top of the light fixtures in the women’s bathroom while watching Under 15 Seconds play. (Note: Under 15 Seconds actually set up in one of the stalls of the bathroom and the entire crowd had climbed the stall doors, sinks, fixtures, whatever we could find to watch them from above). To this day, the top of those fixtures haven’t been cleaned or dusted since it opened.

Chris: Making Henry from Oldfriends laugh so hard he threw up and pooped himself… at the same time.

Jen: There was a drone outside of the Annex show during Year 3 and it was terrifying. I think it was trying to eat people. I think Western Settings brought it. Second, the ZGs. They ruined us all when they taught to how to Ice, while crashing with us during Year 3.

Kevin: Seeing Rev (of Success) play as the second guitarist of Western Settings in Year 1 was pretty cool. Or, Year 2 at the Stork Club when we had the outdoor stage and the neighbors got super pissed. They actually drew a picture of a middle finger and hung it up in their window, or there was the other neighbor who just blasted techno music. We could only hear it between songs, so the second a band finished, you’d just hear blasting techno. The other cool thing about that stage was one of the best spots to watch was actually through a whole in the fence on the sidewalk from behind; that was pretty cool.

Matt: Under 15 Seconds and The Donnas.

Dan: Green Day more then Jawbreaker ’cause I grew up listening to more Green Day. But actually… I say Pinhead Gunpowder.

Kevin: There was a “Counting Crows” in there somewhere too.