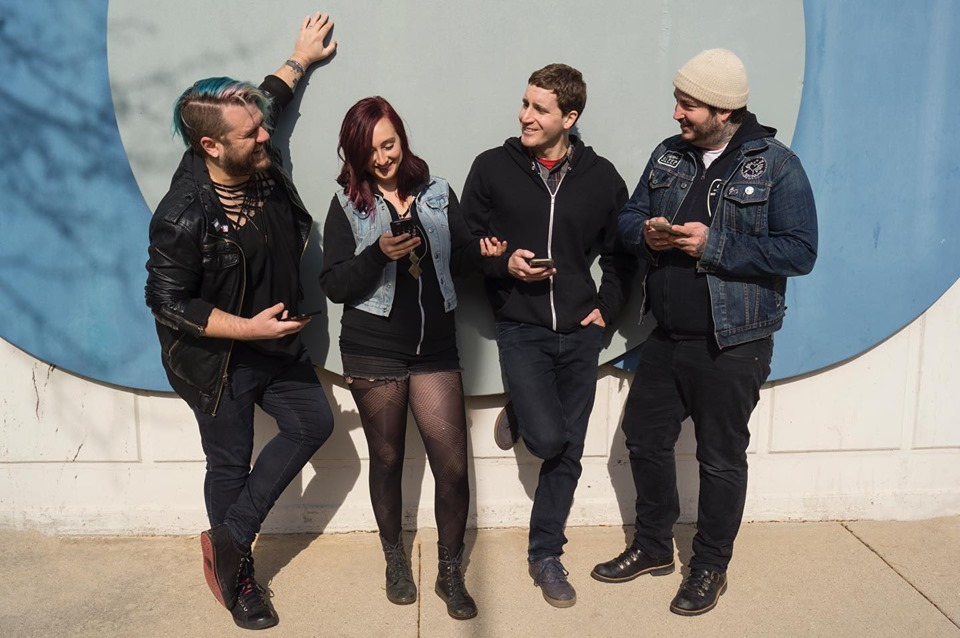 When I found out that Chicago’s beloved band Turnspit would be ending their four or so year run, I was distraught. I had been to so many of their shows, witnessed the lineup changes, celebrated the release of their debut LP, and actually shot some promo pics for them Once Upon a Time.

As the trite expression goes, “All good things must come to an end.” And that end will be this Friday, June 14th in Chicago at Beat Kitchen. The band will be playing their final show along with The Blind Staggers, Blood People, Steveo & the Crippling Addictions, and Still Alive.

But before the final chapter closes, we’ve got one final song premiere from Turnspit. Last November, the band recorded two songs with Dan Precision (88 Fingers Louie). Both of the songs are woven with the themes of moving on and learning to become a different version of yourself. The band released singer/guitarist Jason’s song “So Long & Good Luck” on Valentine’s Day and today, on singer/guitarist Gillian’s birthday, Bad Copy is so excited to be premiering “Dogsitting.”

Gillian had the following to say about the song:

“‘Dogsitting’ is a song I wrote while I was dog sitting two very sweet pitbulls in Ukrainian Village. That was one of the first neighborhoods I became really familiar with when I first moved here and I still love it.

Typically, I write songs about heart ache and loss— I’m really good at making people feel sad! But this song is different, it’s really my love song to Chicago.

The city had always been a minor character in many of my songs, but I never found a way to illustrate my deep love for it via song. I just started thinking about the imagery of the city and my sensory experience of it and wrote it all down. Then, I bound that all together with a  catchy chorus about feeling like myself for the first time in a long time, but also as a completely new version of me. It doesn’t talk about the sadness I had felt leading up to it or the hard work that I put in to get there; it’s about the triumph of being who I am, and loving who I am, in the city I love more than anywhere else in the world.

Gillian also added her thoughts regarding the end of the band and their final show:

“Turnspit completely changed the course of my life in every way possible. We knew from the get go that this band was something special. I never thought I would pursue music seriously, and I am forever grateful to this project for teaching me that I can and that people will listen.

Turnspit challenged me to be a better a songwriter, vocalist, and guitarist—but also to become a better person. Through all of the ups and downs, dream-come-true experiences and throw-in-the-towel-forever moments, Turnspit guided me through a really formative part of my life and made me a person that I am proud to be.

Although I’m pretty devastated that this immensely important part of my life is coming to an end, I am so grateful for everything I have experienced and learned as a songwriter and human being along the way. Jason and I saw this thing through and I’m so thankful to have the opportunity to learn and grow alongside them in our individual journeys and together as Turnspit. Thank you for listening, thank you for supporting and stay tuned for what’s to come next.”

Listen to Turnspit’s final release, “Dogsitting,” below and make sure to come out to their final show this Friday at Beat Kitchen in Chicago!